With plenty of smack talk during the week, the first two Club Championship heats were finally upon us..!! The turnout was brilliant with 6 twelve footers on the lawn and a gorgeous spring day.. Andrew Short Marine had even made the journey up from the Goldie to try their hand.. The breeze was light and the rig choice was simple.. Or so we thought…

Everybody threw in big rig except Pennyliss who just happened to be running late.. I mean late as in we were getting changed and about to hit the water when they rolled in to the park… By now the breeze had come in and you could tell from the serious faces on the Ghetto sled boys, it was going to be a big afternoon with big rig..

We hit the water with no real drama’s.. Well that was on board PB.. Old Yella had a tanty and after jumping in the boat, they accidentally tacked straight back on to the ramp for a second try… We finally got them off the beach and headed to the start line.. Things were heating up..!! Proper big rig with a solid 12-15kts..!! Yeeha..!!

The wind was coming straight down the channel and we had to do 41 tacks to get out of the harbour.. It was the bottom of low tide so we were all quite cautious about going outside of the marks… This resulted in there being only two boats at the start line on time.. Squid and Ghetto..!! Ghetto was actually too eager and were over the line and had to go back where as Squid nailed it.!! Unfortunately for them, we were not that far behind and when they splash tacked 30m off the line we were all together again..!!

PB, Ghetto, and ASM went left while Squid hit right.. Around the top mark it was PB then Squid, ASM and Ghetto, then a bit of a gap to Old Yella and Pennyliss (who missed the start due to tardiness).. We stayed in that order down to the bottom mark.. PB got to the bottom mark and goofed up the drop.. We ended up swimming with the fishes and Squid and Ghetto got through.. ASM had a little swim on one of the gybes so didn’t quite get through.. The chase was on..!!

Squid found some clear air and let me tell you they LOVED it..!! The after burners were on that was to be the last we saw of them..!! PB managed to make up some ground on Ghetto on the upwind but after a near miss with a stray Hobie cat on the run, we hit the piss and lost it all again.. Around the bottom for the final time it was Squid.. Then plenty of clear air.. Then Ghetto Sled and an angry PB.. ASM were next a bit further back, and Terry and Pennyliss were having a few rides too.. The next windward saw a mistake free Squid hold their fairly impressive lead (4mins..) and the tussle between Ghetto and PB intensify… Ghetto went left and PB mixed it up and went right… The suspense was chilling..!! Left paid and Ghetto got a little jump.. At the top it was Squid, Ghetto and then PB… Squid threw up their big white kite and started flying towards their first win of the season, Ghetto screamed around the top mark in second but botched up the hoist and found themselves with a big, big kite in the big, big blue meaning big, big problems… They hit the piss and PB came past to get the sneaky second.. Ghetto stayed ahead of ASM to keep third. 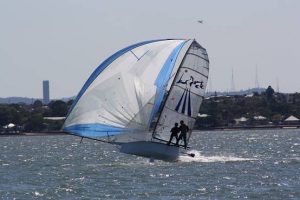 There were issues aboard Old Yella with old owner and new owner sending her hard..!! She bit back and sent them both around the bow.. B-Mad landed on something.. We’ll never know what it was but it was somewhat hard and knocked the poor lad out for a moment.. The team decided to call it a day after another quick kite ride..!! (B-Mad did go to the hospital that night and was treated for concussion)

Race two of the club championship saw another horrid start by all skiffs except the Slippery Squid..!!

We all went left and by the top mark it was Squid leading with PB, Ghetto, ASM and Pennyliss all hot on their heels..!! We all ascended on the bottom gate and Squid took the port side while PB tried for a sneaky starboard.. We dropped the kite and tried to gybe.. The theory behind the move was brilliant, unfortunately we had shed too much speed on the drop and when we tried to gybe the big sails arm wrestled with the little blade and as always the big sails won.. I kinda knew things were going to go pear shaped when I grabbed the boom and it fought back.. SPLASH..!! Ghetto and ASM got through us and Pennyliss were also right there..

We went left and it paid well.. We caught and passed ASM and Ghetto and set our sights on that Slippery Squid… Around the top it was Squid, PB, Ghetto, ASM and then Pennyliss.. Squid picked a pretty ordinary line for the gate and had to throw in a few extra gybes.. PB just managed to sneak through which started to put some pressure on the Squid boys.. At the bottom mark Squid had a much smaller lead on PB.. We tacked off and headed left.. Squid only kept a loose cover on us and by the top it was tight..!! PB tried a sneaky early lay on the top mark… We had to throw something at them..!! The breeze looked about right.. Bens heart went straight in to his mouth..!! Unfortunately the glory was short lived and the breeze swung back and we could no longer lay the mark.. You could hear the yippee’s from the Squid as we had to tack again to get up to the top mark.. Squid did a near perfect set and soared down through the finish for her second bullet of the day. PB got second and ASM were 3rd.. Ghetto took 4th and Pennyliss 5th..

It was as always a sensational day on the bay.. Beautiful clear skies, 12-15kts and what we thought was flat water.. That was until we saw some of the photos.. Pennyliss may not have won a race on Saturday, but the photo’s certainly prove they were the real winners on the day..!!

Big congrats to the winners..!! A win is the ultimate way to part ways with your noble steed.. I sure hope your new boats not too much faster than the slippery Squid, or we’ll never catch you..!! This also means Terry, that when you take over the reins, there will be no excuses..!! The Slippery Squid likes to win.!! 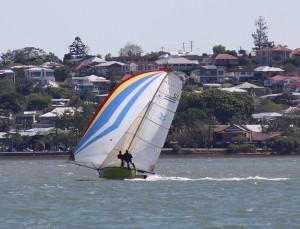