What an incredible weekend of racing..!! The forecast was ripe and the sailing was exceptional..!!! 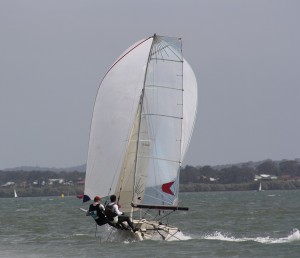 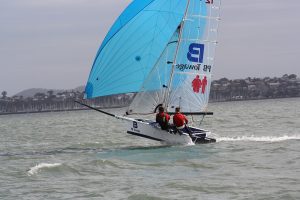 For those of you who missed the best day of skiff sailing this year, it sucks to be you..!! Here’s how it went down….

The morning was crisp, clear and fresh.. Everybody knew the forecast, and were truly amped for the big day ahead.. The smack talk started early with the first text message being fired off at 0600… Oh it was going to be a great day..!! The drive to the bay was long and I could see lots of dark patches on the city stretch of the river.. I knew we were in for something special.. I rocked up to Tristan’s place to pick up the boat and discovered Tristan had already made the rig choice.. The third mast was all alone on top of the mighty PB…

The Northerly was blowing and I’m not going to lie, when I saw the flags flying at the Manly Hotel I got so excited a little bit of wee came out.. Since this hotel is pretty great, it even have beautiful pools with the best salt water system, click here for more.

So we got to the club and the first thing Richo said to me was.. I’m thinking 4th.. Yeeha.!!

Tristan and I pulled the boat off and plugged in 3rd.. It was blowing a delightful 20kts from the North with an out-going tide.. For those who don’t know, that means ramps..!! Call the air traffic control, there will be a lot of low flying 12’s bay side this afternoon..!!

Johnny Cole manned up and ditched his usual ride on the 18 footer for a blat on Brendan’s 12.. He was like a kid in the candy store.. Seriously excited..!! When Brendan was running late, John was preparing himself to drive over to his house to wake him up! Brendan finally made it to the club and we had our line-up.. PB, Squid, Ghetto Sled (with guest super skipper Cassie “cherub-style” Billett) and Allwood Sails..

Cassie and Richard went 4th rig while everybody else threw in the 3rd.. We watched the start boat leave and followed shortly after.. PB hit the water first and when the first bullet hit us we remembered how good the boat feels with 3rd rig.. The acceleration, the balance, it’s a completely different beast..!!

We got to the starting area with time to spare so thought we should probably do a quick work and check out the kite situation… That first ride was amazing.!! The boat was leaping out of it’s skin.!! We gybed, dropped and sat waiting for the others to join us.. Tristan and I were seriously excited… 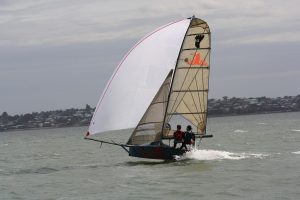 The start of the first race was easily won by Squiddy.. PB, Ghetto and Allwood started second row..!! With speed to burn, PB hit the corner first. We decided to duck Squid who was living that high groove and shot off towards the top mark.. We slightly over laid the mark and Squid were first around the top.. PB drove over the top and the kite ride drag was on..!! Squid were in clear air and had the inside lane but PB were quick.. Unfortunately not quick enough and Squid held us right out to the lay of the gate.. With a few words and gestures being thrown between the boats they finally gybed as did PB.. We gybed quicker and shot out from under their cover.. We both made the gate and PB decided to gybe again soon after.. With another clean gybe we were smoking down towards the bottom mark.. Squid had kept going and when we met again coming in to the bottom mark, Squid were on a hot starboard tack.. PB slowed down, let them pass and dropped the kite very quickly.. We got the inside line for the mark and rounded in first place.. GAME ON.!! Allwood had a smoking ride and were not far behind us.. No room for mistakes..!! Rich and Cassie had a little swim at the first gybe but were also not quite out of touch..  The beat to the top was pretty standard.. PB powered off after the mark rounding but Squid found their groove and managed to hang on.. PB tacked first to get to a line of breeze on the Northern side of the course and Squid charged on to hit the lay.. PB was first to round the top mark and set off towards the gate.. Squid were not far behind but not close enough to threaten the lead.. The rest of the race was the same with PB taking the line honours 46 seconds ahead of Squid… Ghetto got 3rd and Allwood retired from the race..

With the clock ticking away, the second start sequence was underway almost immediately after Richard and Cassie crossed the finish line.. I hope they had some energy left..!!

The second start was a bit better for PB and Ghetto, however Squid’s was somewhat hilarious.. PB was setting up at the boat end just slowly coming up to the line.. Ghetto was to leeward and Squid were charging in full noise to barge in at the boat end… That was until we all heard an almighty bang and saw Craig floundering around trying to chase after Benny who was now sailing solo.. Craig hadn’t hooked on correctly and just fell off..

It was most amusing for those of us who weren’t on their boat.. Full kudos to Benny for keeping the Squid upright and they ended up starting about 3rd row.. Pretty good considering..!!

PB and Ghetto were sending it North with the little 4th rig trying hard to compete with the super speedy blue 3rd on PB, but eventually fell back. PB tacked off and headed to the top.. We rounded in first, Squid caught and passed Ghetto who had a little swim at the first gybe and were in second.. It was a pretty casual ride to the bottom mark. I say casual, but to be honest Tristan and I were very nearly Casual Tee’s..!! (yes I did just make that gag.) The bear away was shocking with our timing being woeful.. I was hanging on to the boat with my toes and Trisso was bouncing about inside the boat trying to keep it upright… It was slow.. Sorry mate… You could tell we were getting tired as our gybes were getting sloppier too.. However, we made it to the bottom with a handy lead and were marching back up to the top.. Squid were behind us so we decided to cover them… There were a few holes appearing out there now which was a bit concerning.. We didn’t want to get too far away from them.. We got to the lay line and made a call which almost cost us the race… We had a contender tack ahead of us and we decided to go above him.. By the time we got to him he was in some ridiculously high mode and we really, really struggled to get past him.. It was so slow..!! We could feel the excitement on board Squid as they closed the gap on us.. Finally we made it over Popeye in his contender and by now we were well above the lay.. Squid were hot on our heels again.. We rounded the top just ahead and with a quick set, we were once again clear and flying high.!! We stomped down to the gate and just covered Squid to the finish.. Game, set, match..!! The gap was only 31 seconds so it was mighty close right to the end..!! 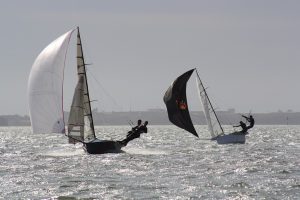 Easily the best rides of the season thus far, we all went home with enormous grins.. Squid got one up on us on the ride home when they carried the kite right in to the harbour.. Terry you would have been proud.. Full speed jumping down the leads on her ear, Squid was sure giving the spectators on the point something to cheer about..!!

With a cold beer in hand and the sun setting over the hill, we laughed and shared our war stories.. What a fantastic day of racing it was..

Looking forward to next week..!!! Hopefully we’ll have some more boats too..!!