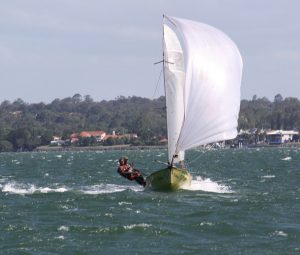 Got my spot on the other side of the ramp. Looked out to the course to see nothing but white caps. 4 foot waves on the ramp it’s not big rig. Walked over to Richard and Crossie for a pre-race chat only to find out that skinny was not going sailing!! “ Skinny it’s Saturday Race Day”, what’s this I hear your driving to Toowoomba for a “sewing machine.” I was straight on the dog and bone to give him a bit of 12ft skiff gee up; sorry skinny but you needed it. It was going to be the best skiff day this year and you’re on a road trip. I hope the “sewing machine” can sews sails.

Wayne turned up just after the briefing full 4th was put in. Wayne then when back to the ute to get the tape measure, to measure the luff length of our 4th rig kite. After a few head scratchers and a word from Richard no change was made. Wetties were on and the 3 skiffs lined up in there cradles just like the starting grid at the V8’s down the Gold Coast, minus the grid girls!

Squid first to leave then Ghetto and the Old Girl. We rounded the pontoon to find a skinny boat in the piss 50mt off the ramp. Yes it was going to be a hard day. Two strings inside the harbour and 4ft waves on the ramp it’s not big, 3rd rig maybe if you are carrying 160kg + or don’t have a 4th.

Off to the start line and boats from the St Helena cup all busted up are coming home, yes it’s going to be a hard day. The Old Girl was on the line Squid just behind and to windward and Ghetto somewhere in the piss behind the line. Squid rolled us shortly after the start and Wayne and I said that will be us next week. The girl was on her way to the top mark in 2nd when the finger flick from god put her on her side. Around the top mark just like any other day, but it was not like any other day, was it, it’s 4th rig and blowing dogs off their chains. Kite up and away we went. Jibe and around the bottom mark up the 2nd beat and around the top mark again. At this stage not sure where any other boat was.  Kite up and off we go again. Around the bottom and back up again, this time I do recall 3 12’s rounding the top mark Ghetto first then Squid. Be the way nice 2 sail mine Ben and Craig I also believe that Ghetto did the same but I did not see it. As one person said to me after the race. “here goes Ghetto around and…… down, here goes Squid around and……….. down the same just like the old days, graveyard at the top mark. Then the old girl around and the same…….no not those two in that boat. Just like any other day around the top mark and up goes the kite and away they when”. But it’s not like any other day, was it?

Ghetto just in front and we did a jibe drop. Put my head up to find that Ghetto was reaching up to go around the mark the other way to FINISH the race. A few words to Wayne to hurry up and bag the kite, we need height to finish. I should have taken more care at the briefing. 3 times to the top mark not 4.

Ghetto 1st  Old Yella 2nd and Squid 3rd. Not a day like any other day! Wayne said “what do you want to do now Smelly…..” I replied ”I have not taken out a six pack in the Bertie Beetle bag with ice not to drink them”. And we did. Wayne then said which I think he was hinting the first time “It’s time to send the old girl for the last time” “Two string kite ride through the leads” A quick bear away and up goes the kite. Just as Wayne got the tack line out I saw the opportunity and took it, or did I. May be I should have told Wayne I was “getting out” Wayne pulled on the kite and the old girl took off like a unrestrained 5 year old into a lolly shop.  As for me I couldn’t find anywhere to my back foot, I was already 2 foot behind the rudder box and heading further back at warp speed 2. Hitting the water so hard I think that I’ve done some damage to the 45 year old body, don’t tell Deb.As I tried the swim to the centre board Wayne said “that was quick! Maybe I should have not pulled the kite on yea” After a few tries we got her back on her feet and home we went. With o

ne broken tiller extension and a few sore ribs, 13 years of memories and 6 empty bottles yes we didn’t lose any. Rule 14 “come home with what you when out with”.  Sorry Bmad but I’ll fix it….the tiller that is.

I still can’t get the smile off my face and the pain off my chest.  Yes it was not like any other day!

See you on the water next Saturday Race Day.