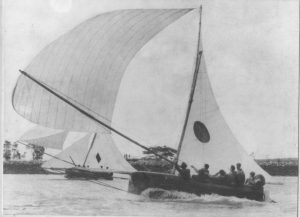 The Brisbane 18 Footer’s Sailing Club was officially formed in 1920, and apart from the war years, 18 footer racing has been conducted from the Club ever since.  However, 18’s had been racing on the Brisbane River since the 1800’s, with the first Australian Title held on the River in 1845.  Between then and 1958, Queensland boats won 23 Australian titles. 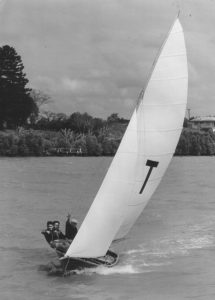 The 18’s Club has a long history of class development, with almost all of the controversial design breakthroughs, from the beamy skiffs of the late 1900’s to the six foot beamed and three handed skiffs being developed in Brisbane River boat sheds.

The Clubhouse was situated on the banks of the Brisbane River at Bulimba, directly opposite Kingsford Smith Drive, Hamilton until 2008 and now races on Waterloo Bay, using the Darling Point Sailing Squadron and Royal Queensland Yacht Squadron as racing bases for the 18ft and 12ft skiffs, and the Brisbane Sailing Squadron on Bulimba Point for the Historical Skiff classes and junior sailing.

Between the years of 1890 and 1910 there were six eighteen-footers that were the ultimate of that period in hull design and rigging. They were the: – ‘Jena’ (C Crouch) – ‘Colonial’ (J Robinson) – ‘Pastime’ (C Crouch) – Vanity’ (W Bergin & Colin Clark) – ‘Aries’ (E Crouch) and the ‘Brittania’ (A Earle).  The earliest traceable links indicate that the City of Brisbane Sailing Club was formed in July of 1895.  In February 1900, it was reported that the Club changed its name to Brisbane Flying Squadron, and later became Queensland Flying Squadron in August, 1905. 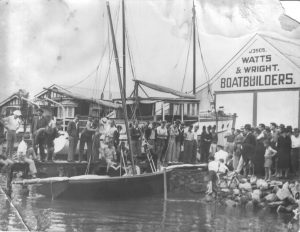 During the period 1905 to 1920 the eighteen-footers raced on Saturday afternoons under the Queensland Flying Squadron banner, and regular Interstate contests were held between Queensland, New South Wales and West Australia.

The First World War, which started in 1914, interfered and restricted the sailing, but in 1917/18 the Queensland boat Britannia, sailed by the late Colin Clark, won the first official Australian Championships to be sailed in Queensland on the Brisbane River. 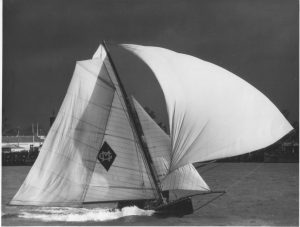 After the war years in 1920 the club was reformed under the present name of The Brisbane 18 Footers’ Sailing Club. Prominent in this move was the late J. Colin Clark and Lance Watts.  A new club emblem in the form of a blue and red pennant with the letters 18 on the blue section near the mast was adopted.  Club and Interstate racing was resumed at full capacity.”

It appeared that the Club actually wound up the Squadron Club and changed the name to the current one between seasons, as the boats and crews remained the same.