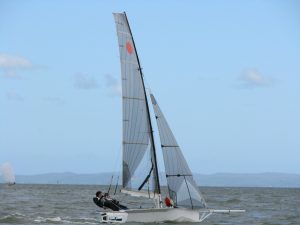 Bang! Bang! 2 bullets to the good.!!
I woke saturday morning with cup of tea in bed and phonecall from tristan that went something like this:”John, I’m desperate, I know your an awesome 18 foot skiff sailer but skinny is in sydney getting a brazilian, spray tan and a book signing of “Eat, Pray Love” and I desperately need the greatest 12 foot skiff crew ever, you keen?””Gee I dunno Tristan, as awesome as I am I don’t want to let down my legion of fans down by lowering myself to sailing a 12″”Please, I’ll rig the boat and even put on a nice shiny new halyard!””Oh alright ya big lug, sold! Call me when the boats rigged”

As always at this time of the year Waterloo Bay (not the one off cairns) turned on a picture perfect saturday afternoon. After much mulling around the 12’s were split between big and 2nd rig, richard/ben and spiesoid/angus going second and everyone else going big. Angus said he was happy with the performance of the 4th in ten knots and they prepared to try something that resembled the correct rig choice. Tristan’s big rig featured the new norths kite and also a nice shiny, slippery halyard (this would come back to bite/burn me). 5 12’s racked up on the line, everyone got away clean, we were a bit 2nd row and had to dip the transom of the challenge (its yellow by the way). We port tacked it out to the stb layline and tacked back to easy lay the top mark in 2nd place (?), the sled 3rd, followed by squid and then challenge. A frantic call of gybe!! by tristan revealed we had overlayed the gate mark (as did everyone else almost). Spiesy and Richard crept through whilst us and squid had to drop and two sail. Big rig was the choice of the day in the first race as we romped back uphill, Spiesy and angus were crouching and we caught them and rounded the top, set the kite and gybed. At this stage I started to realise my poor choice in not wearing gloves. After leading towards the bottom mark we were slowed by an ordinary kite drop (partly due to raw hands and a few crash gybes towards the bottom). Places around the bottom and to the finish were sled, the boat formerly known as ASM, PB and squid. Terry retired due to a broken boom, the boom has been with the boat and terry for a long time. There will be a memorial service this tuesday and flowers can sent to terry’s email.

Race 2 started with the Sled and ASM starting halfway up the first beat. If the Sled was over then ASM were over, there weren’t in the same postcode! Anyway, ASM squeezed us out with etchel type pointing and we were lucky not to take out the spiesoid with the pole (or not lucky, depends how you view it). A low groove saw us creap out under him for some clear air. Richard/Ben rounded a clear first due to starting 2.5mins ahead of everyone (how did the starters not see this!!) followed by ASM, PB and the Squid bringing up the rear, ie last. My hands were feeling like skinny’s hands when he’s single and made for some sheepish looking kite sets and drops. The breeze kicked a bit for the second race and richards 2nd rig was the choice of the day. He was dynamite fast uphill with strapped on vang and boom over the back corner with just the right amount of windward heel. The race finished in that order: 1st Ghetto Sled, 2nd PB, 3rd the boat formerly know as ASM and 4th (ie last) Squid.
An awesome day out on the water and I must say it was great to get back onto a skinny boat. No crashes to report (only the death of terry’s boom) so the rescue boat must have been real bored not having to “rescue” anyone. The gate also made for some great racing downhill with everyone having to converge and therefore tactics were almost more important downhill, there was more passing downhill that uphill. Thanks to richard for lending me gloves for the 2nd race.
PS: I included Paulo for this report as he sailed on the weekend.
John (I sailed a 12!) Cole