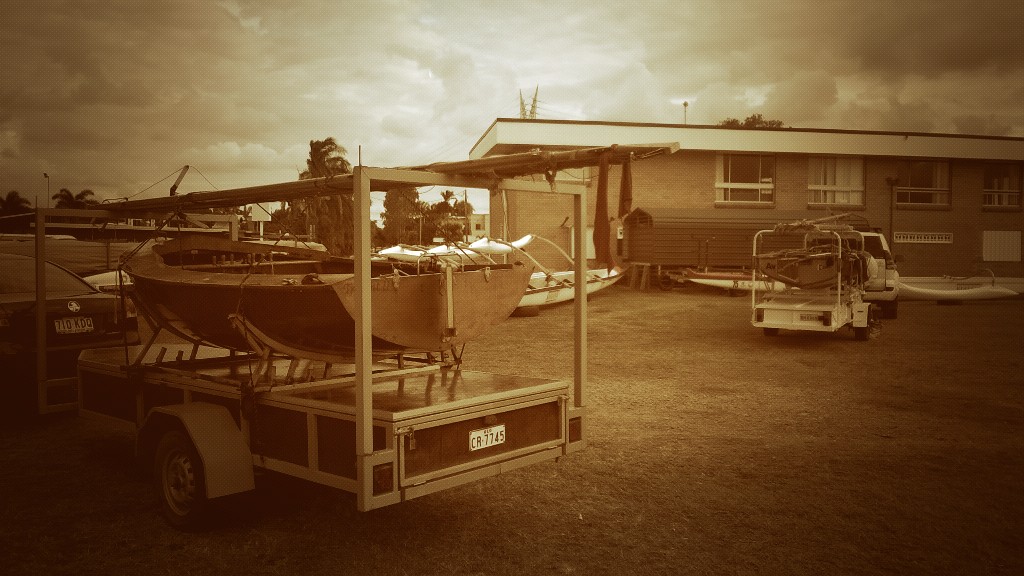 In a twist on last week’s racing, the conditions at the rigging area this weekend were a little more indicative of what we’d expect once we poked our bows around Bulimba Point.  The choice of rigs all round was 3rd rig, though the Avro gear is slightly bigger than that on the other two skiffs Truant and Jessie.  The start was delayed due to a missing 3rd rig jib on Truant, but eventually the skiffs hit the water.

Today saw us creep the course length out, with a start on Bulimba Point, down to the Cairncross Docks, then upstream to the area off the old Hornibrooks site, before finishing again at the point.  The start line off the point still gets some significant wind shadowing, and the easterly honking down the River from Colmslie with nothing to slow it down save some yacht masts was, to put it politely, “fresh”.  Thankfully a flood tide meant we didn’t have waves to contend with, but that was about the only saving grace.

Avro had the jump at the start, but Truant was further inshore and had a better line once they found the “pressure” (read: significant amounts of breeze).  Jessie had a lot of leeway and were actually forced to tack back to the southern shoreline to clear the start line, and generally this set the tone of the day for the girls.

It was a battle royale for the lead however, with patches of less insane breeze (did I mention it was windy?) giving Avro an edge, while when it was REALLY blowing, Truant would forge ahead.

Truant got the better of it down along the Bulimba Barracks, and she led around the first mark, followed by Avro about a minute behind.  Both skiffs were set for a port hoist, and while the wind direction over the last few hundred metres of the upwind seemed to back that choice, an oscillation back to a due east direction mean this was going to be a tough carry.  Truant gybed to try for a set, but ended up on a heading putting them ashore, and they were forced to gybe back.  Avro watched, and elected to take a higher course out into the tide and hoping to get a better angle back once past the bend at Apollo Rd.  After a failed attempt to put the boom over, she hoisted the wire luff flattie and set off in chase of Truant who was still two-sailing along the southern bank.

Sailing upstream past the Point is new territory and the wind being slightly south of east meant the timing to drop was crucial.  Avro had closed on Truant to within a few boat lengths, but Truant had no spinnaker to drop and was able to point higher in the shifty breeze.  Again in search of more stable breeze, Avro went wide but it failed to pay off with Truant running less distance to the mark.

Once around, Avro decided to try setting the flattie off the bumpkin for the run home to the point – it worked in part, but Truant had hers set conventionally and took the win (and handicap) by just over a minute.  Meanwhile, Jessie was still battling on and was heading around the point as the other two skiffs were finishing.  It was a great effort in some tough conditions for a crew that hasn’t much time on the water together.  All crews were stiff and sore at the end of racing (did I mention the wind?).

Big highlight of the day was the company of a pod of dolphins that made their was upstream, and used our mark as a rounding point before heading back down… one even did a close swim past the shore at the ramp.