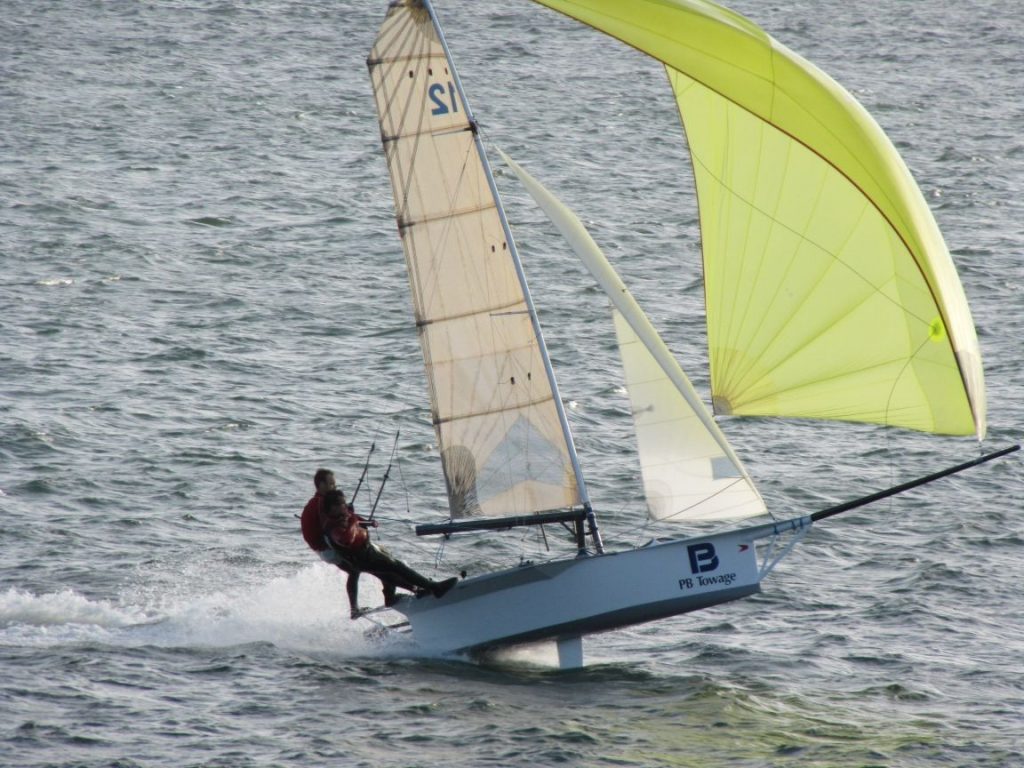 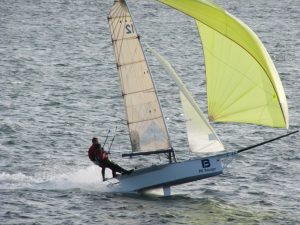 Squid, PB Towage and Ghetto Sled took on the NSW (and Victorian) teams on the beautiful and treacherous Sydney harbour. Hosted by Woollahra SC, the area around Rose Bay came alive with 24 skiffs all vying for position. Race 1 was held in a 10-15kt NEer and the fleet was split between Big and 2nd rig. The battle was fierce with Ghetto pushing the front few and PB coming good after a slow start. Ghetto crew Ben Cross smashed his elbow at the top mark and still has pins and needles a week later. Ghetto and PB were trading blows down the first run and PB was having on ongoing argument with a drunk “fisherman”. Around Shark Island, then during the lull behind the island Ghetto was hit by a big puff and rolled it in. Richard fell over the side and caught the tip of the rudder and sailed the rest of the regatta with one leg. PB stormed on and caught the front runners by the bottom mark. Garde held a strong lead to win, with LCC 2nd and PB 3rd. Squid had a consistent race to stick an 11th and Ghetto Sled 14th. Not the best start for those 2, but they woudl come good.

Day 2 saw a Southerly change and 20-34kts.!!!! PB and Ghetto played it safe with 4th rigs but Squid sent it hard with the 3rd and came away with 2x 7ths for the pain. PB started well and held it together in the first race to come 5th and were running 2nd in the latter only to come unstuck at the first gybe. Tugmaster Tristan decided to check the centreboard and Skinnyman held on for his life as the boat took off, unafraid of sailing one-up. Ghetto passed the upturned hull with glee and found themselves in 4th place

. A good solid send and they ended in 4th behind Skoll. Lots of fun was had by all and there are plenty of photos kicking around.  DUnit sheared their rudder pod off at the transom and Geotherm sheared their transom off.!! Ex-qlder Paulo in Giddy Up sent his crew through the main to check the other side.

Day 3 and the Southerly died and was replaced again by a NEerly 10-15kts. PB pushed hard with the big rig and were rewarded with a 3rd and 4th. Ghetto suffered being underpowered in the first race and had a swim whilst in 6th in the 2nd to post 2x 9ths. Squid started strong with a 6th, then were running about 9th when on the way to the finish line they hit some boat wash and ripped their dolphin wire out of the hull. The pole and kite tangle cost them 8 places and they couldn’t race the last day. Every boat in Sydney harbour was blasting around making waves and targets for the fleet. Surprisingly, almost everyone came out unscathed and with a few good rides to show for it.

Final day and the forecast was looking sad. Everyone donned the big cloth, until about 1230 when some shooters were coming over the hill from the south. PB and Ghetto changed down quick, then with 10mins to go to start time, everyone else decided that was a good idea and the committee let them change. Apart from the occasional southerly puff about 12kts, the race was run in a dieing Westerly and and fast running tide. Ghetto started fast adn went round the top mark in 3rd, then had to stall to retie the kite. PB charged onwards and stuck with the front bunch. The fleet slowed when they’d turned against the tide round the bottom mark. The long battle upwind took its toll on Giddy Up, losing out a couple thousand metres on their close competitors. 5 interdom champs between them and they were reduced to retiring. PB battled forth and were close to the lead thanks to a favourable Westerly puff. Ghetto also made ground but in the end got stuck in a hole with half a beat left to the finish line. 7th place looked like it might slip away, but they held on with 8 boats chasing them into the finish line. PB stayed strong in 5th. 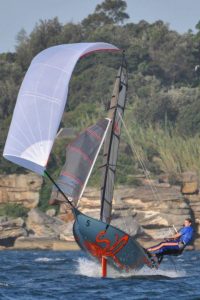 Overall, the qld team performed well, finishing in 4th, 6th and 9th. Things are looking up for the home town Interdominions over the New Year 2013.