Spring has sprung, and the QLD 12’s made the most of it..!! Open day for the Brisbane fleet was spectacular..!! Hot temps, hot breeze and hot racing..!!! With months of playful winter banter behind us, it was time to see who the main contenders were for this season.. With new boats, new crews, old boat birthdays and the return of Brendo and Joel, the 2013/14 season was always shaping up to be an epic battle, but nobody would have predicted such a tight battle on day one..!!!

We rocked up to the club with nothing less than pure excitement.. The forecast was for 10-15kts then 15-20kts in the afternoon.. Oh did I mention it was 30 degrees..?? Who said sailing in August would be too cold..!!  We all went 2nd rig except Brendan and Joel who put in big.. Having said that, they were on the back foot from the start by losing their c’board in the off season.. They needed to try something to catch back up..!!

We headed out to the start with a gorgeous 12kts from the North.. It was obviously the start of the season for other clubs because the bay was packed..!! It was like being on Sydney Harbour on Australia Day..!! Well not quite, but it was busy and we had to dodge a yacht here and there… 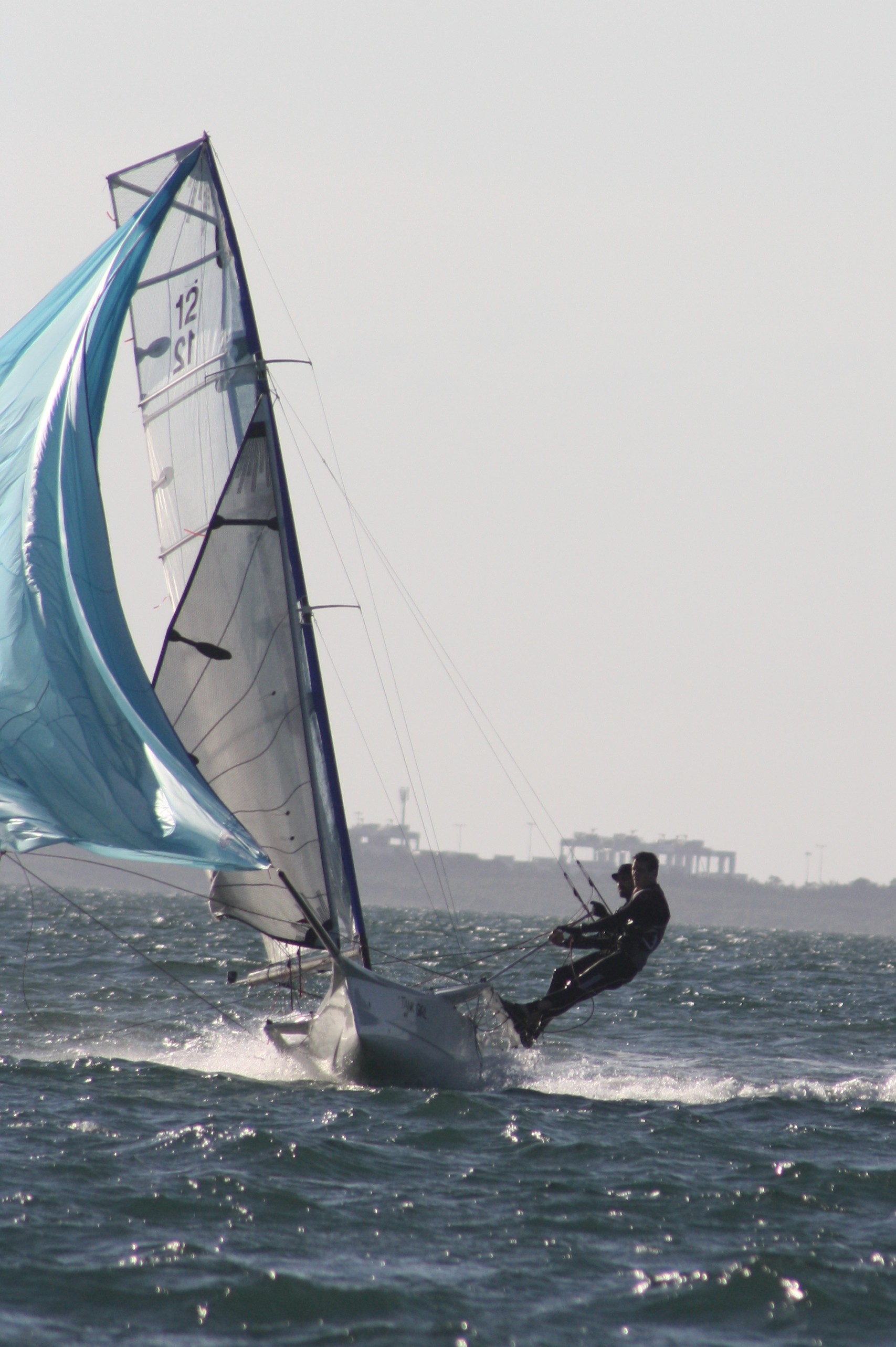 The flags went up and it was game on.. We were all there but you could tell our distance time skills were somewhat rusty, with Terry being the only one to nail the start.. PB were on the chase with Ghetto and Tank girl close behind.. Tank girl and PB tacked first with Ghetto and Squiddy heading a bit further left.. It paid, and when we got to the top mark Ghetto and Squid both did the sneaky tack on the top mark to take the two top placings.. It was all very close though and you could throw a blanket over all four of us..!! Ghetto did a cracker of a set and took off.. Squid and PB were locked at the horns in a do or die battle for second.. PB had the inside lane and took them on the corner.. Tank girl also managed to push their way past and at the drop it was Ghetto Sled, PB, Tank Girl and Squid.. With an unfortunate bullet mid drop PB stuck it up in to the breeze before they had rounded the mark .. This let Tank Girl and the slippery Squid through.. It wasn’t long before Squiddy and Tank Girl tacked off to attack Richo and the Ghetto boys covered.. This left the right hand side open for PB.. We hit the corner and the breeze had built.. We were inside out and loving every second of it..!! By the top it was still Ghetto then Tank girl with PB hot on their heels.. Squid were lacking height in the new pressure (which we later worked out was probably due to their rig tension being about half of what they wanted it to be..) and PB were able to capitalise.. The next run was pretty standard with no position changes.. Up the final work Tank girl once again attacked Ghetto and this time they forced the error.. Ghetto sled hit the piss on their tack and this allowed Tank girl to slide past to reach the top mark in 1st place.. PB weren’t quite able to pass them, but it was all very close..!! We rounded to top mark and sent it to the finish line.. It felt awesome to be blasting down the bay again.. There really is nothing quite like it..!! Tank Girl took the win (even if it was in Bradbury style) to clinch the inaugural Talk it up Cup..!! As we flopped around after the finish there were ear to ear grins all round..!! There were also some pretty bloody tired bodies very much looking forward to the second race..!! Brendo and Joel were on the water by now and with it blowing a solid 15kts, their big rig was looking pretty big..!! 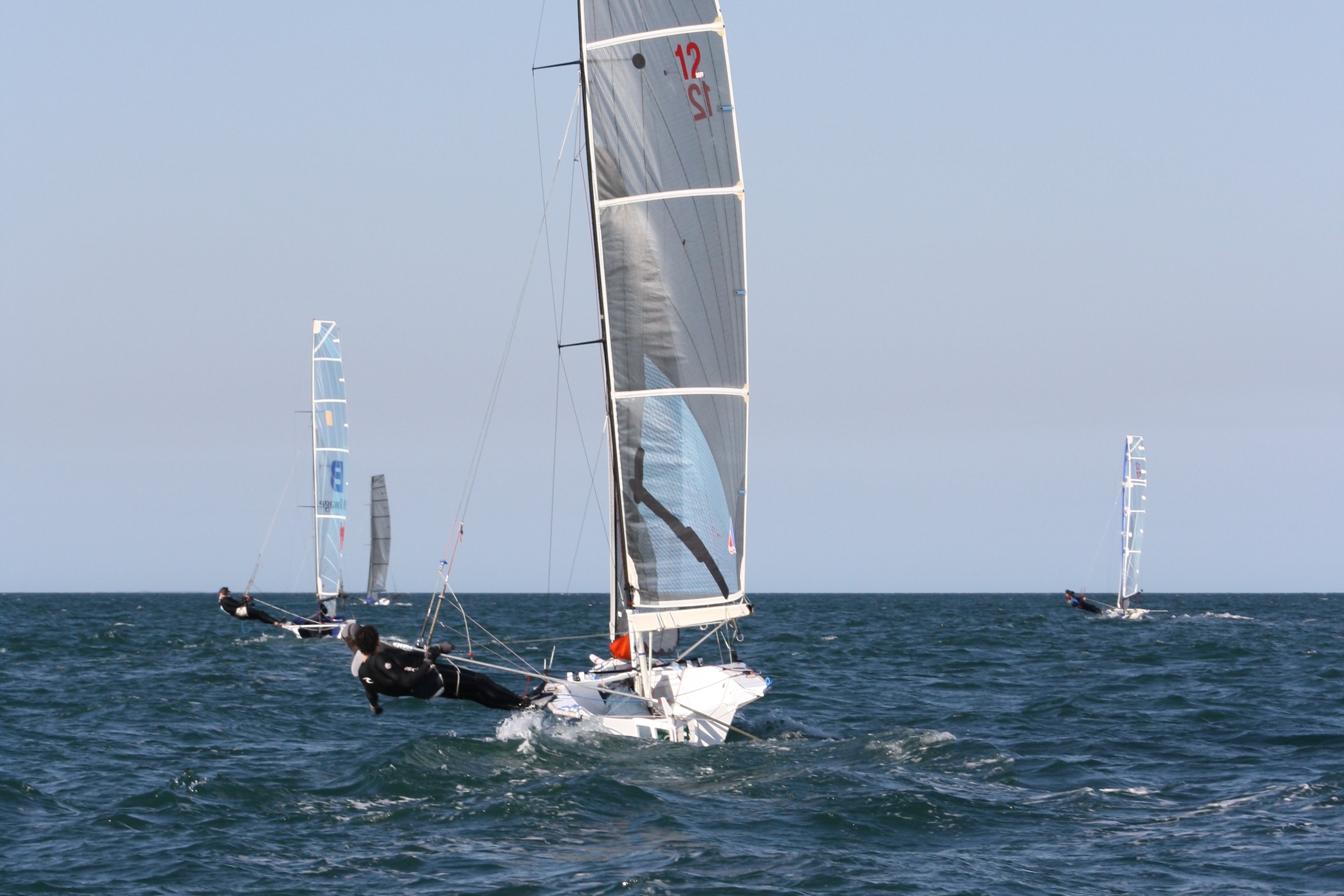 We got underway for the second race with PB and Allwood sails hitting the line first.. Tank Girl had some pretty good height and at the first corner she was able to tack inside and on top of PB.. They were first around the top with PB squeezing out Ghetto for second.. PB did a good set and had gapped Ghetto by the “wingman” mark.. Squid put up the kite and blew out a terminal on their fancy carbon bobstay.. It was a disappointing exit for the boys but that’s 12 foot skiff racing for you.!! At the bottom it was Tank girl 1st, PB 2nd and Ghetto 3rd.. It became very obvious that match fitness was starting to play a big part in the race as no crew really attacked and it was a bit of a soldiers course.. We did an entire lap in that same order and it wasn’t until the last tack of the last windward that anything exciting happened.. PB tacked in some breeze and went in.. Richo and Benny cheered and called out GAME OVER as they passed us.. Karma’s a bitch and they didn’t lay the top mark.. They had to tack and during this pressure tack they boys put it in too.. We scooted past them again to take the second place.. 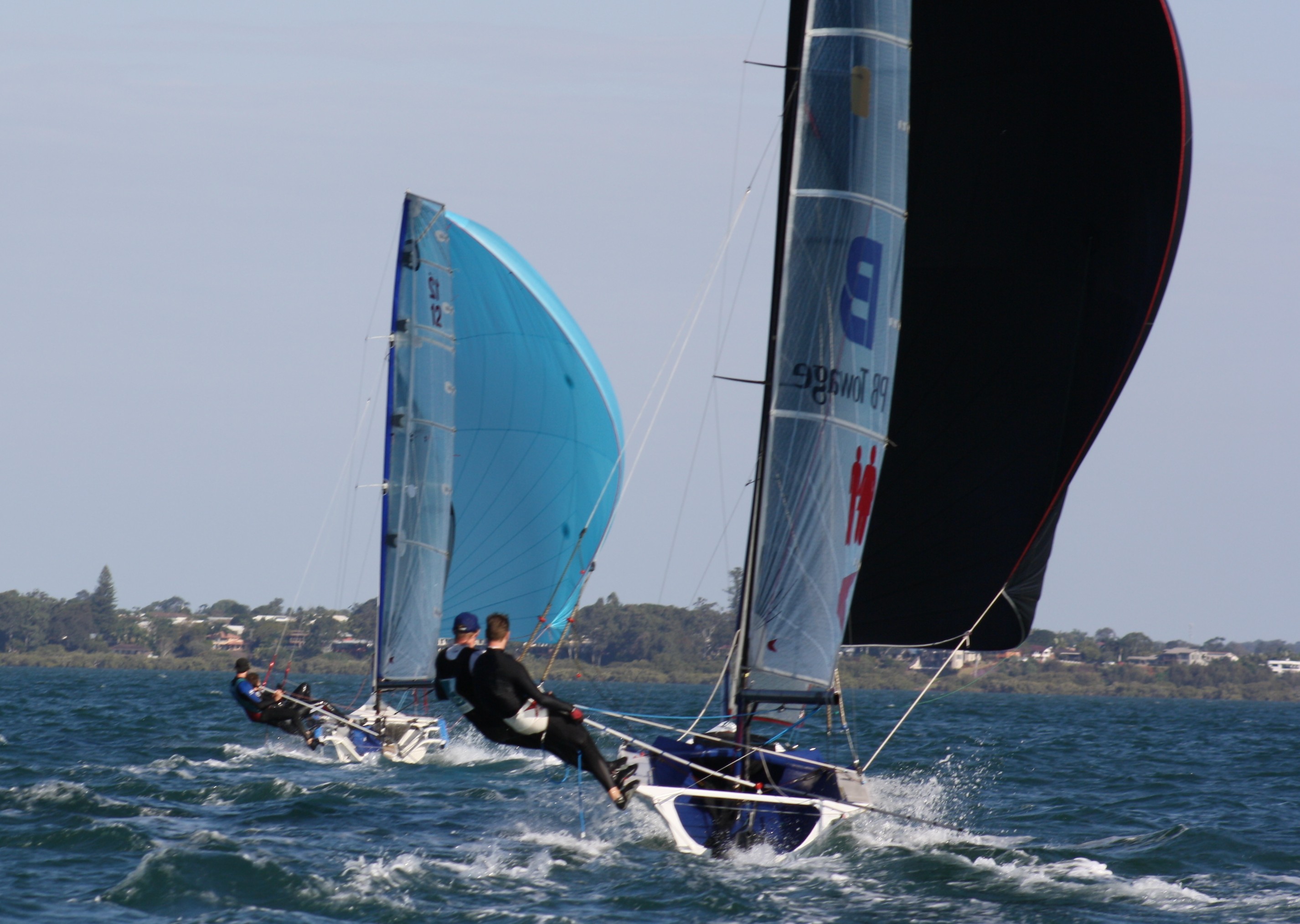 It was all very exciting..!! Full congratulations go to Benny and Craig on Tank Girl.. They out sailed everyone and were the deserved winners..!! I’m sure there were some sore bodies on Sunday.. I know I was a bit stiff but it was totally worth it.. Every time I stood up I was reminded of the amazing day we’d just had.. On a person note, I was very happy with our performance on PB.. It was the first time John and I had sailed together on the boat and we were right up there throwing it at the boys. We have a lot to improve on, but hey.. We have the whole season ahead of us..!! I’m sure all the boats shook of a fair bit of rust and there will be less and less mistakes in the coming weeks.. GAME ON..!!

Post racing, the ramp was alive with chatter..!! It’s awesome to be back at the boat park and I can’t wait for next week..!! I’ve already checked out the long range forecast and I’m not going to lie.. It looks AMAZING.!! 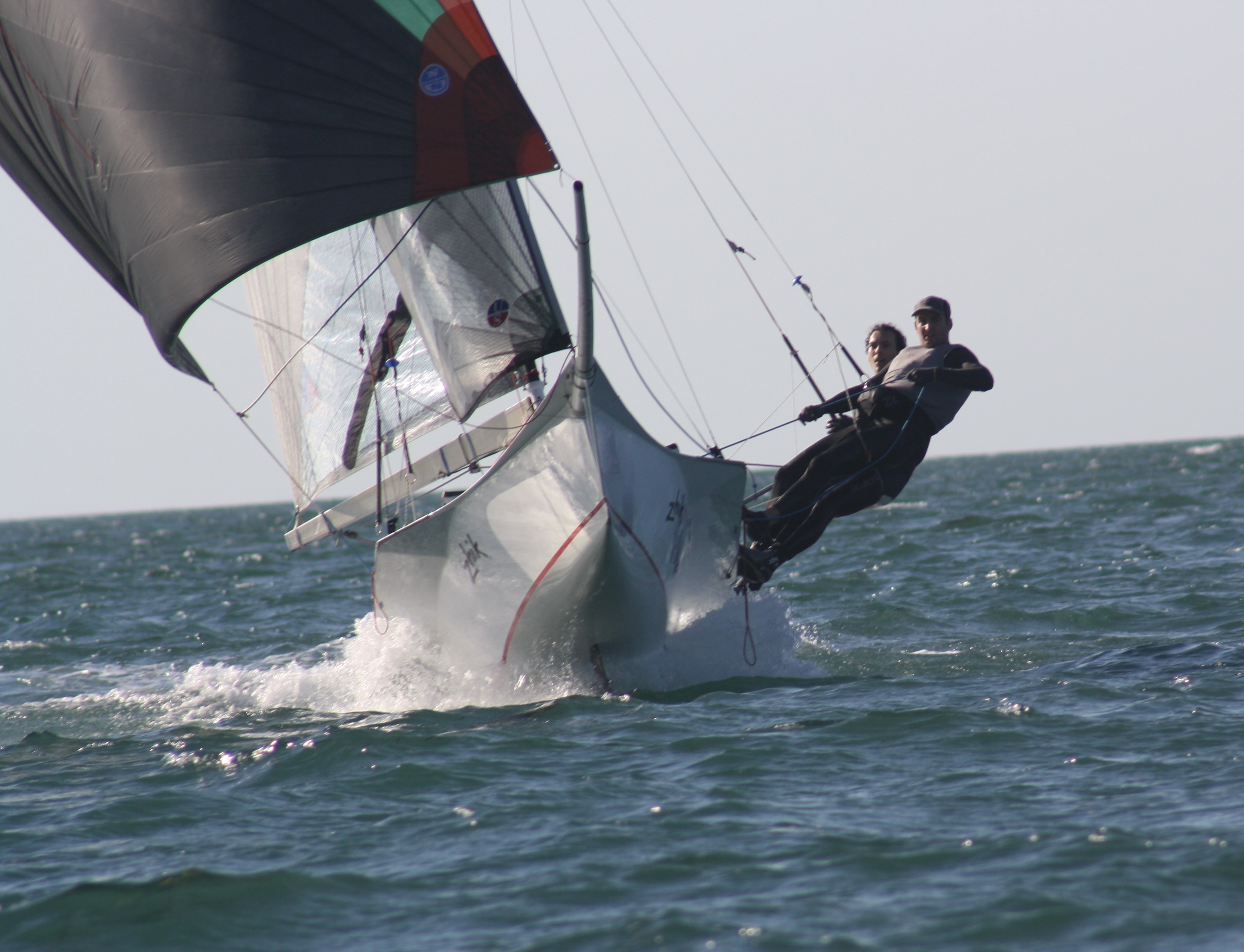