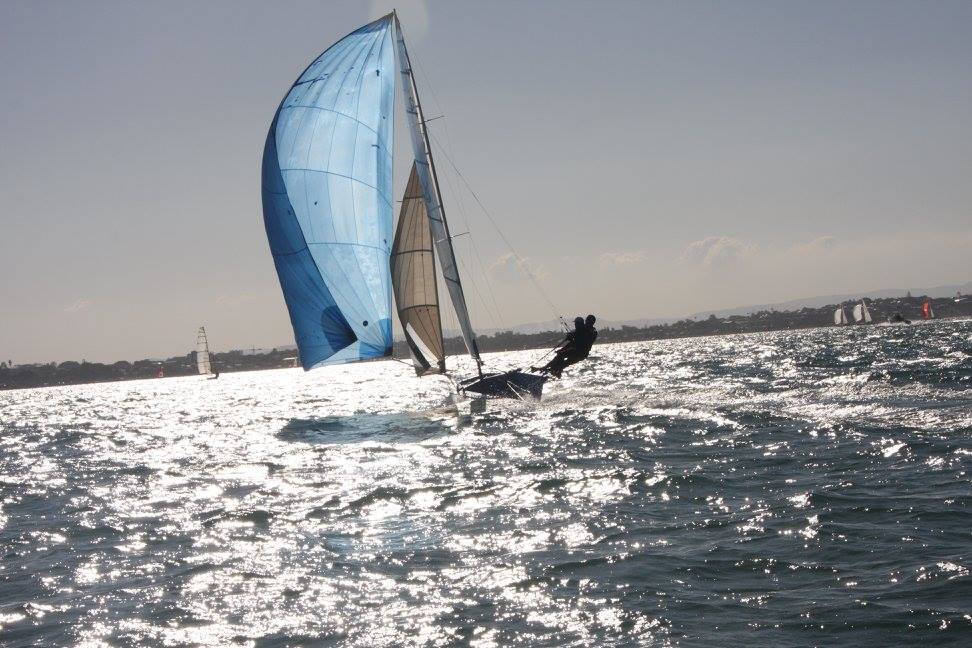 Saturday saw the first two heats of the QLD State titles and let me just say… What a ride..!!!! The online banter started early in the week as we rode the 7 day forecast rollercoaster.. With predictions changing daily it was going to be anyone’s guess what we would see on the bay.. Bottom line however, was that it was guns on the table and game on..!!!

We arrived at the club, it was a stormy Saturday morning.. The heavens had opened and the rain had sucked all the breeze.. All that anticipation.. All that smack talk during the week looked like it was for nothing as the talk around the park was for a possible “code flag sausage..”

Fortunately the rain eased before any crazy decisions were made and a soft Northerly started to grace us with its presence…. We were going sailing..!! Only issue was the two super cells heading our way.. The race committee thought we’d put it all on red and have a crack so the rigging lawn games began… Which rig.?? 3rd  to be safe with the 15-20kts forecast..?? 2nd because it’s really really hard to plug in 3rd when it’s not even 10kts yet…?? Big because it’s under 10kts and you have big kahoonas for when the super cells arrives..??

The fleet looked to the old and wise for advice… Paulo made the call for second and everybody agreed.. Everyone except Paulo’s crew who plugged in big..!! We’d been tricked..!! That sly red head threw the bait and we all took it…

It wasn’t until we all stood the boats up and saw that Giddy up had an extremely large second rig… However with the storm clouds gathering and storm chasers arriving with their cameras, I for one wasn’t too concerned I had the smaller sails on board…

We slowly made our way out to the start line managing one string.. We racked up and after all the pre-race build up, it was time to walk the walk out “ON THE WATER”… 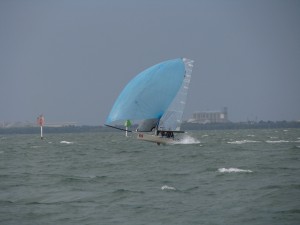 A clear start with every boat on the line was a fantastic indication that it was going to be a close race.. Joel on Skiff Ropes tacked first with Wingman next to go.. However at the top mark it was the Donkey on the Edge who rounded first, followed closely by Giddy up, Tank Girl , Wingman, Skiff Ropes and Squid.. Tank Girl gybed early.. Donkey, Giddy up and Wingman headed to the corner.. Wingman started to roll Giddy up and they gybed off before we could pass them.. Donkey gybed at the corner and just managed to cross Wingman on port (with a little help).. At the bottom it was Donkey who rounded first with Wingman hot on their heels.. A little way back was Giddy and Skiff Ropes and Tank Girl.. Tank girl  tacked off early and looked like they were throwing in the towel and headed back to the club.. I looked back and chuckled to myself thinking he was in deep doo da and going backwards down the fleet in a hurry.. By the time we’d worked our way North and we tacked for the lay, that’s when we spotted in the distance some white water coming off the bow of Tank girl.. Benny had spotted a shift and some more wind coming down the bay and had just laid the smack down on the entire fleet..!!! He was high and fast and gapped all of us.. Paulo started making his move too with the additional puff and at the top he was in clear second. Skiff Ropes was 3rd Wingman next with Donkey and Squid not far away.. Tank Girl held on to lead around the bottom mark with Giddy up now closing the gap.. Wingman had found a passing lane around Skiff Ropes and was 3rd..

With the extra breeze Giddy up with their big rig was able to pull two strings and the difference was incredible.. They smoked past Tank Girl like she was standing still.. We rounded the top with Giddy up first, Tank Girl second and Wingman third.. Skiff Ropes, Donkey and Squid were all close behind however there were no more passing lanes between them and the finish and that’s how the first heat ended.. Paulo’s plan had come together.. His deception onshore, his decision to go big even with the super cells surrounding us had paid off for Big O. Well done.. Well played.

However……. The story does not end there…..

As we waited for the course to change after the wind shift and let the 5o5’s to do their start thing (numerous recalls etc….) the Northerly breeze had built.. There was a storm cell to the North with lightening in the distance… A cell to the South with lightening in the distance.. The wind was whipping up the waves and by the time we had our start it was a delightful 15-20kts..!!! Sucks to be you if you’re carrying big rig..!!! 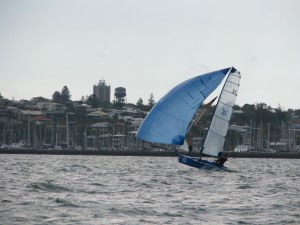 We started poorly.. I mean that sincerely as there were only two boats remotely near the line..!! Giddy up and Donkey went screaming off the line and the rest of us followed 5 seconds later.. Donkey tacked first.. Wingman and Tank Girl had plenty of pace and managed to tack inside Giddy up (who subsequently had a little splash tack).. Around the top in first was Donkey on The Edge.. Followed by Tank Girl, Wingman, Skiff Ropes and Squid.. Donkey lost a stay on their bow pole so the kite came down in a hurry.. Tank Girl led Wingman around the bottom but it was close.. We headed North and for the first time ever, Wingman had height and speed on Tankers..!! Tank girl tacked for the lay first.. Tacked is probably not the best way to describe what we saw.. It was more they in to the breeze, went backwards for  bit and then kept heading back out the original tack.. Wingman called out So Long Suckers and tacked for the top mark.. Up went the kite we scooted towards the bottom mark.. Tank Girl was now feeling the heat from Giddy up who was all about the power moves at this stage.. They rounded in second and third with Squiddy in 4th.. Around the bottom Wingman had held the lead and Tankers had managed to shake off the Giddy up a little bit.. The lumpy seas must have been fun for that big rig Paulo..!! It was pretty much a procession of survival for the last lap with little to report, however Wingman did almost choke on the second last gybe of the day after they had to avoid skewering a 5o5 from behind.. Further, Wingman loves it a fresh second rig and it showed, as she rounded first. Tankers pulled the kite halfway up then commenced prawning, this was not looking good as the boat had stalled and was almost parked, at this point rather than do the usual lean to leeward and slow capsize the boat leaned to windward and the bow lifted, really weird, but enough for the kite to pop clear of the ocean and the hoist completed.  It was the sort of action movie scene where our hero should have ended, but with a slight twist of the laws of physics, thermodynamics, a bit of “be the ball nan nan nan naaa” and a healthy amount of slow motion, they survived… Sheet on go.

We waited for a little while after the race to see if they were going to try for a 3rd race however the storms were looking ominous and the rum was calling so the race committee sent us home..

With such tight racing and some epic 2nd rig rides,  all crews were buzzing when we hit the ramp.. Paulo’s ploy for big rig had got us in the first race but had come undone in the second… The table for the title is super tight after the first two heats with Wingman, Giddy up and Tank Girl all on equal points..!!

Already the lads are looking at this weekends forecast and it’s looking juicy! The QLD fleet are loving the racing at the moment and we can’t wait to get over to Auckland in January..!! 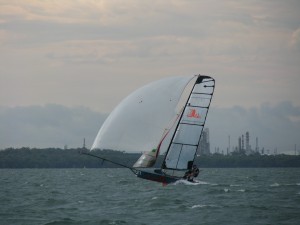 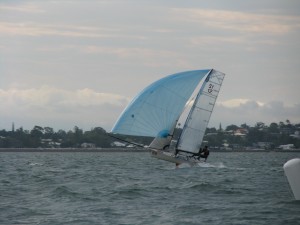