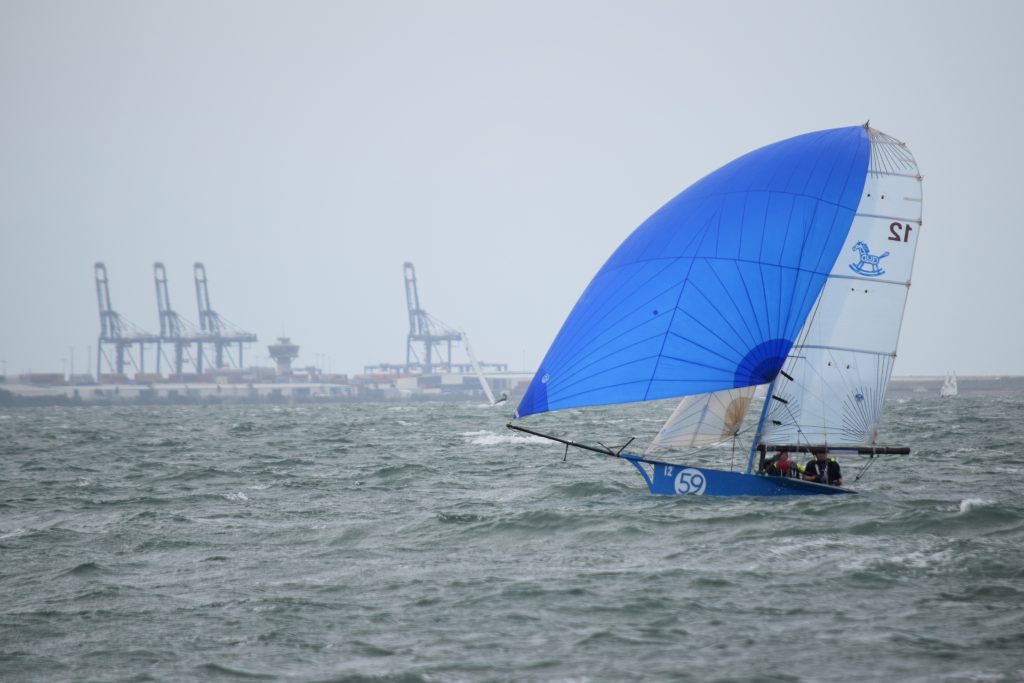 Not so much a race report as a summary of the day’s antics.

Giddy Up arrives at the rigging lawn hoping to find a crew to Shanghai.  Not five minutes later and without speaking to anyone, no one, not even the sandwich lady, a text message is received; Alex heard I required a crew and he can be on the lawn in 25 minutes. Crew sorted.  Tank Girl arrives with the tin lids in tow and only a 2nd rig on the pony float.  They won’t be leaving the beach.

Forecast 15-20.  Various sailors returning from a morning sail were all reporting less than 10 knots.  Pffft it’ll be 15 to 20, 3rd rig.  The ramp chatter with the 49er did get as far as predicting difficulty bearing away and submarine-ing.

Sailing out of the harbour and the wind was close to 20knots.  Within the harbour we passed one hobie cat that had already run into the mooring pontoons.  Just outside the harbour and another two hobies were dropping main sails and damaging rudders.  The 49er was already capsized.

I estimate 20+ knots at start time – NE in direction, tide had just started to run out.  Weave our way through the fleet of VX’s and a 29er.  As a side note the starter actually displayed a 12’skiff class flag.

Two attempts to bear away (no capsize) and we were first around the windward mark.  Up goes kite, bit lumpy, ask Alex to keep the kite a little chocked while we sorted ourselves out. Sorted? Yes – good – ease the kite… a bit more…a bit more and BAMM everything on the boat was making noise as we jumped clean over the second wave.  Warp factor 5.  Survived the unco-gybe.  BAMM down to the bottom mark gate. No tactics, round the easier one.  There is the 49er on its side.  Went to the right side of the course during the upwind.  Mainsail was flagging for most of the work.  I guess closer to 25 knots by now.  Three attempts to bear away at the top mark (no capsize).  Alex was a bit light and the kite wasn’t setting properly so Paulo had to get on trapeze also. KABAMM, it’s time to gybe already, KABAMM it’s time to drop the kite as we are heading nowhere near the finish line.

Decided that that was enough fun for the day.  Advised the RC we were going home and put up the kite for one more ride.  Through the lumpy, bumpy stuff at the outer end of the leads and into the nice rollers doing manic speed.  Got to beach, unrigged, put boat on trailer then watched the 49er return to the beach without a mainsail.