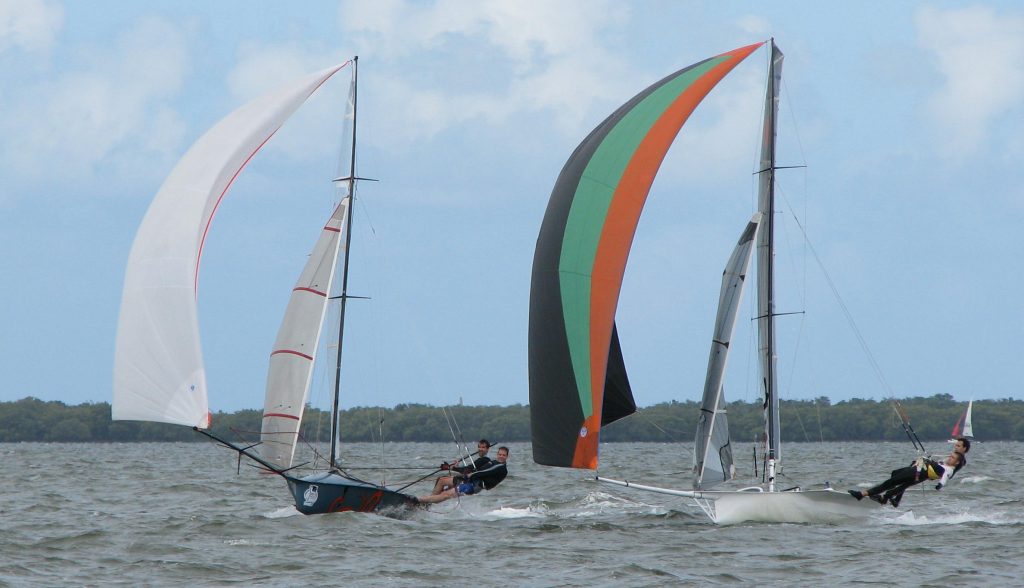 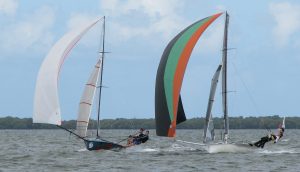 They’re calling it Super Skiff Saturday, and for good reason..!!

With 5 twelves and 5 eighteens on the startline, it’s the biggest skiff fleet Brisbane has seen in a long time… The standard has been set and the bar is being raised every week..!!The return of Squid meant that there was much anticipation and friendly banter during the lead up to racing.. The forecast looked good and all crew were at full strength.When we arrived at the park there was a lovely 15kt breeze right across the bay.. The tide was ripping and there were a number of white caps out there.. This got the boys fairly amped as we all know how much fun a good second rig day with a few ramps can be.. Onboard PB we were especially excited as Tristan had tweaked our second rig back in November, and we’d been gagging to throw her in ever since..!! The rig choice was simple, or so we thought, 2nd rig or bust… Spiesy however decided to throw in 4th rig.. Now Mr Spies is no fool.. He’s been around the traps a while, and to be honest he made us all second guess ourselves for a split second or two… What did he know that we didn’t..?? Turns out he was just hoping for an easy day out there with Angus… I’m not sure that’s how it works though.. When is sailing a 12 ever easy..!!All five of us were on the water and at the start on time.. I know what you all think I’m full of it, but it’s true… The hooter went and all 5 of us were on the line and at full pace.. Game on..!! The start boat was clearly the place to be, so we were all fairly bunched… ASM were closest to the boat end.. Then Squid, PB, Old yella and the Ghetto Sled were groovin low.. Old Yella were unfortunate being sandwiched between two skinny boats and got spat out the back quicker than Paris Hilton can get her gear off.. PB then had room to low groove it down on top of Ghetto and put their nose ahead of the Squidgee.. ASM were one wiring chubby style and were never really in the hunt.. Old Yella and Ghetto tacked off once they had been eaten up.. Squid and PB continued out to the left… Squid tacked first and PB tacked shortly after.. Coming in to the cross over with Ghetto and Old Yella looked very interesting.. For a big moment I though Old yella had us all..!! Right looked good, but with bigger wind came bigger holes and the boys got stuck in them.. Squid sailed off the map and PB tacked on the lay line to be first around the top.. Kite went up in a flash and before you could say Skinny boats rule, we were hammering full speed down to the bottom mark.. Squid came around next then Old yella and Ghetto Sled.. There was a quick splash tack onboard Ghetto, and as we have all learnt the hard way, Terry and his Humble steer Old Yella loves to punish a mistake…

It was tough to spot the bottom mark flag but we managed to nail the gybe angle and blasted down to the mark.. Squid were sailing on their own in second place and the real battle was for third.. Old Yella had the legs to beat Ghetto to the bottom mark but the wind eased ever so slightly and the Ghetto Sled hit the go button.. Not far up the work and Old Yella was back in 4th.. ASM were battling with 4th rig… Unfortunately it was not a day for slow and steady to win the race… Back to the pointy end and heading back to the top mark we went right and hit the corner.. Another good hoist and the skinny boat scooted back downhill to the finish.. Just to make things a bit trickier for us, the yellow start boat was off rescuing an 18 so we really had to search for the line… We took a punt thinking that if we were early we could just gybe back in.. After all, we had a couple of minutes up our sleeve.. (Oh yes.. I went there Benny..)

We finished in that same order and after all that it was a pretty comfy race.. A good hit out by all.

The second race only had 4 starters with the retirement of ASM between races.. The breeze had eased a little but we were still able to pull two strings.. With 7 seconds to go PB thought it was time to power up.. We were early and had a daring dance down the line in front of the fleet.. It was not a fast option as was pointed out to me many many times after the race… However sometimes that stuff happens and you have to dig your way out.. We put the foot down but couldn’t really get an advantage over the Squid.. We hit the corner and Squid covered us.. We tried to low groove our way out, but they had our measure.. Hmm…  Ghetto and Challenge were hot on our heels too..!! Squid rounded the top first with PB close behind.. Ghetto was next with Old Yella two boat lengths behind.. Unfortunately the skipper on Old yella got a little bit excited mixing it up with the skinny boats and took a tumble trying to get out the back of the boat.. You’ll find him at goodtime this week buying some new booties..

So the time had come to gybe.. Trisso and I talked about our game plan.. Nail the gybe on top of Squid and we would be back in it… Well we gybed on top of them, it was not pretty, but it was pretty effective.. We were towed below the bottom mark… The woof hull was able to go a bit higher than us but we were both too low for the mark.. This was our chance… We knew we could drop quicker than them so we just hung in there  and rode their wake… The drop came and we passed them on the inside… Game over. Further back Ghetto and Old Yella were chasing hard.. The drop in pressure hurt Old Yella more than the other boats though.. No Terry I’m not calling you fat… You’re just well rounded..!!

PB were able to extend their lead a bit on the next lap and finished ahead.. Ghetto Sled were the big movers and shakers on the next lap.. They were not far behind, and with a small knot in the tack line on Squid they found themselves well in touch.. Squid went around the top for the last time in second place.. Ghetto were close behind, and Old Yella were once again ready to pounce on any mistakes made. Squid gybed a little later than they probably should have and the boys on Ghetto capitalised.. They managed to roll Squid with 100m to go making it a skinny boat 1,2 finish..!!! The photo sequence of the roll will be on the net shortly I’m sure.. Well done Ben and Richard to get past them.. Looking at the photo’s you were hungrier and were rewarded for your efforts..

All in all it was a sensational day out there.. Nothing like a comfy second rig to get the fleet pumping..!! It was a pretty odd chop out there by the end of the day too with all the pleasure craft.. At times we felt

like a cork bobbing in Sydney Harbour… It was WEIRD..!!! But good practice for the nationals at Easter….

Looking forward to next week already..

See you there..!!
Skinnyman