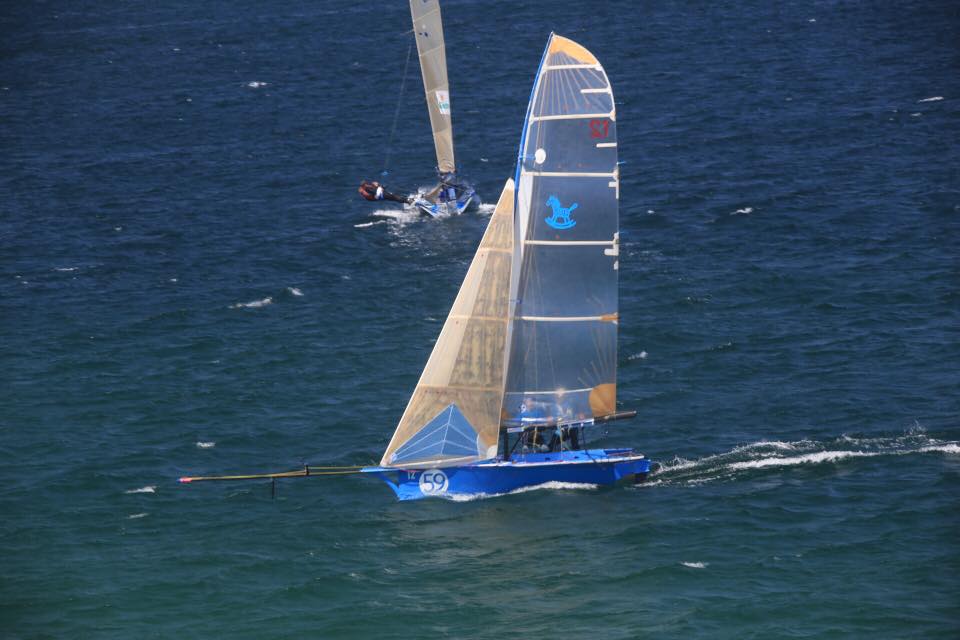 Recapping on Saturday 2/2/19.  The water was murky and uncomfortably warm and the skies overcast and Giddy Up was the only starter. They had the bay to themselves and a cracking ride in 20knots with the 2nd rig dialled in, catching the Etchell fleet with 1.5 legs of the race to go each time.

Fast forward to Saturday 9/2/19; it had rained during the week, all the turbidity had gone from the water as had the temperature. The forecast was predicted to about 10 knots from the ENE. Bang on the money.  The Wingman appeared on the lawn with only big rig on the trailer.

Along with Wingman, rigging on the lawn was 12 footers; Tank Girl and Giddy Up and taking prime position nearest the ramp was 18 footer, Hull#2, being sailed by Dave, Scoobs (along for his first go on a skiff that is not one design) and regular forward hand Elliott.

We launched the 18 first. They ploughed the road as such, making the journey for the following 12s much easier.  Out on the bay the race course was located between the end of the channel and the middle of Green Island and the tide was full.  Flat water magic.

Race 1 and we were off the start line with VX’s and Elliot6 training boats. Tank Girl pushed hard left, Giddy Up remained middle and Wingman was slightly left of middle. Hull#2 missed the start as they were off co-ordinating the team work.  On the 12’s it was a perfect big rig ride. Lie back on trapeze and let the boat do the work.  Up the centre worked the best and Giddy Up rounded with a comfortable margin as Tank Girl and Wingman rounded together.  A bit of race management did come into play at the first bottom gate, all the Etchells had gone for the right mark (obviously the wind had shifted to the north just a little bit) but with so much traffic, Giddy Up opted for the left mark, sailed close hauled for 100m or so before tacking and heading back to the left side. With the Etchells cleared out, both Wingman and Tank Girl had a choice on rounding and went one each way.  Up the next work slightly left was favoured, but not too much.  At the next top mark Giddy Up had maintained the lead, possible increasing a bit, while Tank Girl rounded just in front of Wingman.  Part way down the run and the breeze had shifted back to the east.  Tank Girl gybed on the front of the shift and was headed straight for the finish line in a lovely gust. Wing man gybed early and got a good run on over to the far side of the gust, then gybed back into the breeze and then had an issue with an port gybe etchell that resulted in the Wingman politely waiting while the etchell while the etchell finished their cucumber sandwiches. Giddy Up did not get the shift until after she had gybed for the finish and with the associated gust was now sailing low of the finish line.  The drag race was on. Tank Girl had speed and a favourable angle, Giddy Up was sailing climbing high with less boat speed. It was getting close, if Giddy Up had to drop the kite to make the finish, Tank Girl would easily roll them…. AAAnnnndddd the wind clocked back towards the north giving Giddy Up enough respite to be able to clear the finish boat and cross the line first.  With the shift Tank Girl was now headed outside the finish line and gybed to finish.  The exciting bit was left for the wingman who had to sail through the fleet of etchells only to come across the elliot6 training boats.  From where I sat it was comedy, the look on Skinny’s face indicated it was no laughing matter.  The steering on the training boats is erratic at the best of times (if somewhat predictable), but when you put a sexy looking 12foot skiff moving at speed with the big kite on into their view finder then they are like a rabbit in a headlight, with all the rabbits around the edges darting off in all directions. A harrowing experience, but the Wingman made it through without any scratches.

Race 2 and BennyG and PaulO had swapped boats and the 18footer was also on the start line.  Clean start all around and Wingman found themselves leading the 12s at the first mark.  The 18 had cleared out and were comfortably in front.  PaulO had obviously adapted to the fab’tabulous contraption that is the Tank Girl quicker than BennyG had de-evolved onto the classic layout of the Giddy Up.  Tank Girl second and Giddy Up third. A bit of gybe for gybe between Wingman and Tank Girl and the two arrive at the bottom gate with the whole of the Etchell and elliot6 training boat fleets.  Let’s do this the easy way and approach the left mark from the starboard side, call water (and starboard for those who didn’t quite understand), late kite drop, immediate gybe onto port and round the mark in a seaman like manner.  Tank Girl and Wingman executed this manoeuvre with aplomb. The judges scored them 9.5’s for style and 9.8’s for synchronicity, it was all happy tears and glitter and air kisses at the camera.  The two split tacks and Tank Girl got the favouring shift and put some distance on Wingman.  Giddy Up had now sorted the teamwork and was closing fast. But it was too little too late, at the top mark Tank Girl hoisted first, Wingman second and Giddy Up third and that’s how it remained.  The 18footer crossed the finish comfortably in front of everyone.

Heading for home the 18footer dropped their kite before sailing down the channel.  Tank girl kept the kite up and caught then passed the 18.  Inside the harbour there were about 37 lasers and, 11 flying 11s plus the 18’ plus the 12’s all headed for the same ramp and into the mix came a foiling moth at speed while a 60foot motor launch was headed for the open seas.  The moth crashed as expected.  The 18 proceeded to plough the road and the 12s cleverly followed in their wake. Simple when everyone plays their part.

So the boat swap brings up an interesting series of questions: Is PaulO so good that he could sail on and win races on any boat?  Or, is Tank Girl such an exceptional boat that anyone could steer her to victory? And if the latter is the case, why doesn’t she win more races?

Marvelous day all up.