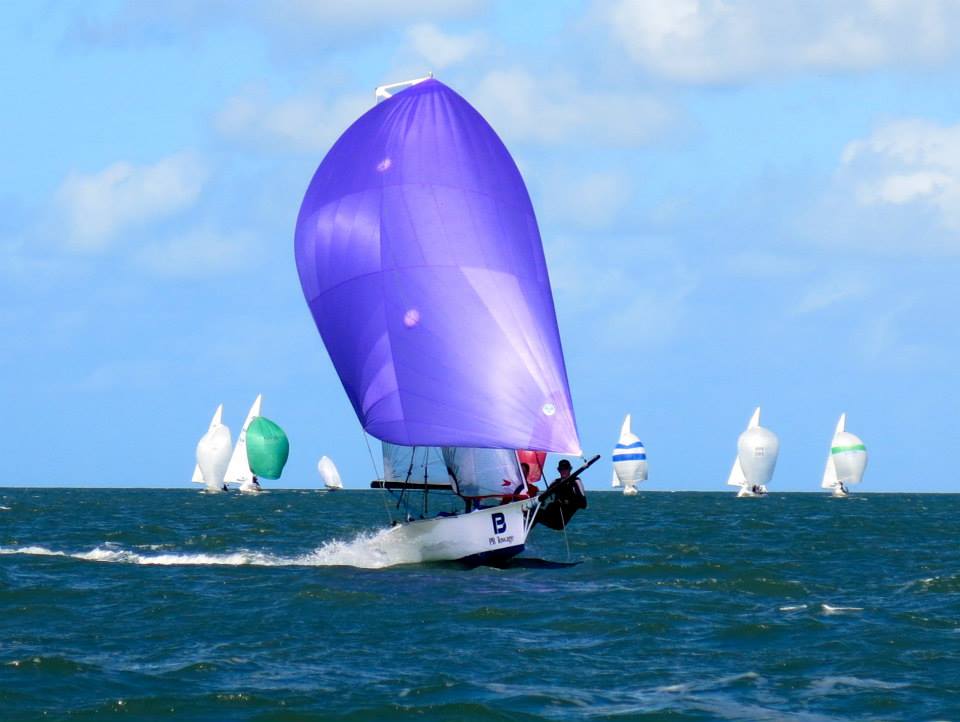 This week’s race report is dedicated to Dodge down in Sydney.. It was he who requested the breeze, and it was us who benefitted from it..!!

The forecast was spot on all week.. Solid 3rd rig..!! With the 18’s away in Sydney, the 12’s had the rigging lawn to ourselves.. Terry had a very unfortunate traffic incident on the drive down, ending up with his big rig mast wrapped around a telegraph pole.. Lucky it was a 3rd rig day..!!

All five skiffs threw in 3rd and we knew it was the right call once we hit the leads.. Blue skies, 29 degrees and bang on middle of the rig range.. Couldn’t have asked for a better day..!!

We all headed to the start line for the first two sprint races.. One lap each on a half size course, the starts were going to be critical..!! The gun went and all 5 of us were there.. Allwood got the jump early with the Wingman and Squid tacking off early.. Allwood and Tank Girl hit the corner and around the top it was fairly congested with Allwood rounding first with Tank Girl and Wingman right on top of her.. Wingman rolled Tank Girl on the hoist, Leaving them swimming with the fishes and were chasing down Allwood..!! We gybed first and were slightly underlaying the finish.. Damn..!! Allwood were coming in hot and we went to gybe through the line but failed and aborted.. We drifted over the line low and slow taking the gun by 1 second.. Intense..!! Squid were 3rd, Tank Girl 4th and Pennyliss 5th.

Race two saw Allwood and Wingman locked in a heated battle on the start line.. Joel and Brendan showed their class by absolutely smoking us.. I was parked up with nowhere to go until they let me.. Total control.. I hated it.. When I was finally able to power up they had accelerated ahead and had me swamped between them and Tank Girl.. UGLY..!! We tacked off and again were hunting from behind.. Tank girl tacked off soon to cover and Allwood hit the corner.. Coming in to the lay Allwood had a handy little lead but somehow reverse mined while tacking for the lay..!! Wingman and Tank Girl tacked together with Wingman a little to windward.. Allwood were smack bang in the middle of the lay line and Tank Girl were snookered..!! With their backs up against a wall Tank Girl had no option but to play dirty.. The evil doctor reached out and uncleated The Wingman’s leeward jib sheet opening the door for Tank Girl to round the top mark 1st.. The Wingman hoisted the kite with anger and smoked it past Tank Girl to take the win.. Squid were once again ever consistent in 3rd.. Allwood headed to the bar… to nurse a suspected broken rib from hitting the gunnel during a reverse mine attempt…!!! .

Race 3 was two laps of the big course.. The start was close with The Wingman hitting the pin end, Squid in the middle, Tank Girl and Pennyliss battling it out at the boat end.. The Wingman and Squid hit the corner with the old boys showing some serious toe..!! We just could not shake them and when we tacked Terry and Wayno went too.. Tank Girl had tacked early and were playing the flat water to the West.. Things were going to be interesting at the top.. Squid had ridiculous height and speed and came up on to The Wingman’s line.. I don’t know where Terry found that gear, but they were sailing like men possessed..!! Fat, Flat and Fast..!! Coming in to the top both Squid and Wingman crossed Tank Girl who looked a little low on the lay.. We tacked over and the Tanker were indeed low.. They were slowly grinding up to make the mark and their hard work paid off by squeezing around in first.. Squid were next with The Mighty Wingman 3rd.. Only 6 seconds separated 1st and 3rd according to the footage and it sure felt like it out there.. All three boats had good sets and Squid were laying down the law to Tankers.. The Wingman found a nice low groove and steadily made up some ground.. Tank Girl managed to get a great puff and shot off down along Green.. This was a pretty awesome ride and all three of us overlayed the gybe.. Tank Girl were leading The Wingman (we cut the corner on Squiddy) When our kite sheet let go..!! We quickly ditched the kite and John set about climbing around the bow to tie it all back up.. It was a pretty gnarly 2 sail with him on the bow let me tell you..!! Fortunately we had all overlayed the mark and although we let the Tankers get away a bit we were able to hold out the Squid.. Up the next beat Tank Girl went right again and hit the corner.. The Wingman were holding all the aces with both height and speed and we slowly ground our way back in to the game.. When we got to the corner Tank Girl crossed, but not by a lot.. We thought they were a bit early so put a bit more in the bank before tacking.. This paid up big as an Easterly shift came through and not only were we now pinching for the mark, but Terry was smoking in on Port..!! Tank Girl had to tack to get to the top and The Mighty Wingman once again rounded the top mark in 1st place.. Tank Girl had a downhill run in with the “Etchell of Inevitability” so lost 2nd place to the Squid, always making life difficult..

A great ride home and The Wingman took the gun 84 seconds ahead of Squid with Tank Girl another 159 seconds behind them.

Awesome breeze, awesome boats, awesome racing..!! We should probably also give a shout out to our new fleet of kite surfers, You guys looked great out there and we hope to see you again next week..!!