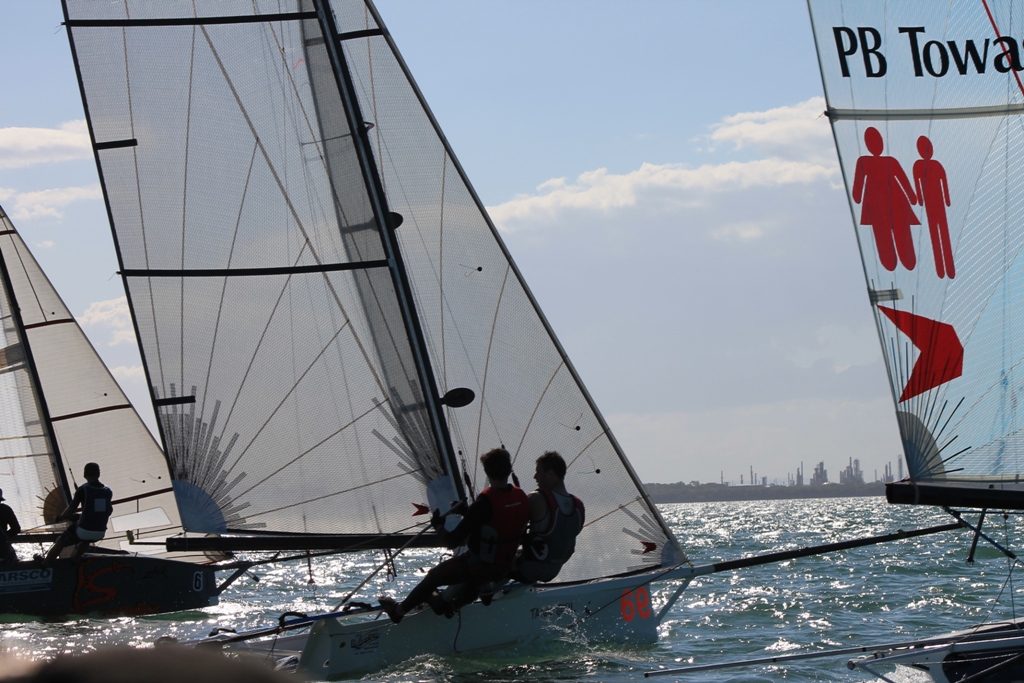 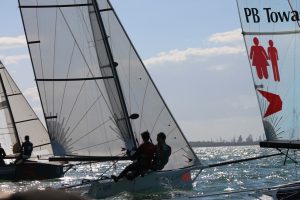 Waking up to a picture perfect day the crews headed to the club with much anticipation.. We’d been battered and bruised with 3/4th rigs for much of the second half of the season and a 30 degree 10-15kt forecast was just what the doctor ordered..

The fleet were split with around 12kts blowing at rigging time with the big boys throwing in big and the lighter crews opting for 2nd..

We hit the water and all crews were pleasantly surprised at the perfect conditions.. On The Wingman we had put in the 2nd rig and were happy to find we were powered up with two strings.. GAME ON..!!

Race 1 was a sprint race with all 6 skiffs getting right in to it at the boat end.. The Wingman had the upper hand with Tank girl and Squid both being held up high with nowhere to go.. Tank girl tried some amazing tea-bagging spider monkey manoeuvre and after seeing the video I have no idea how on earth they kept that boat upright.. The wingman finally pulled away and we were off..!!

The big rigged Tank Girl showed immediate pace off the line by rolling over the top of Squid.. We could hear the roar of their bow wave on our hip but John and I dared not turn around to look at them.. Tankers tacked off first leaving The Wingman and Squiddy heading left.. The breeze was probably 10-12kts and it was clear the Tankers had the advantage.. The Wingman tacked about 30seconds later not wanting Tank Girl to get too far out of our sights.. We got a lovely little left hander and oh my, it was game on Benny..!! Coming in to the cross and Benny seemed to have overlayed so John and I cut the corner and made up some more ground to round right on top of each other.. During the week there was much banter about hoists and it was game time..!! Craig and John went for it and if I was to score them, I’d call it a tie considering the rig differences.. Things were close..!! But the Tankers had the big kite and were able to suck low.. The breeze built a bit but it was too little too late… Skiff ropes were around the top next ahead of Squid, Pennyliss and The Cougar.. We finished in that order with Tankers getting their well-deserved 15 second win..

Race 2 was shaping up a little better with the breeze building a little and the 2nd rigs now looking the goods.. With 2mins to go we had some gear failure on The Wingman and we were hurriedly lashing things together when the start gun sounded.. I believe Tankers got the start again but Squid looked to be right on their heels..!! We finally hit the line be it almost a minute late, and it was catch up time.. Run rabbit run..!! We headed left because the fleet seemed to have gone right.. Thanks to another lovely little left hander we tacked pretty much on to the lay and with the good ship Squiddy in our sights.. Pow pow..!! We were easing sheet, reaching for the cunno and feeling pretty chuffed about our rig choice right about now.. Around the top Tank Girl had held tough and were first.. Squid were second and The Wingman 3rd..!! Kites went up and the skiffs were off..!! Tank Girl were the mega low groovers with their big kite and seemed untouchable.. Squid were a squeeze high and The Wingman was able to find a sneaky low mode which saw the gap shorten.. Both skiffs gybed together and The Wingman had the inside lane.. We were both high for the finish line but The Wingman gybed on to Starboard and got through Squid as they dumped on top.. Close stuff and great practice for the Nationals..!! Crossing the line Tank Girl once again got the gun with The Wingman and Squid filling out the podium. Skiff ropes and Pennyliss followed with The Cougar busting out of its sail and retiring..

Race 3 was the long one.. The breeze was steady at the 12kt mark.. The Wingman won the start this time with Tankers low grooving it to get out of trouble.. Squiddy were down there somewhere too but we all just watched Tank Girl walk away.. We kept our height and when the Tank Girl tacked we were right on their hammer.. Benny you still owe me that beer for avoiding you by the way… We continued on for a bit and again tacked a little later.. We went up to the top and Tank Girl crossed us with a little bit more room but not as much as we expected as the breeze was now 10ish kts and there were holes appearing… We tacked for the lay and out of nowhere Squid were on a flyer..!!! Tank Girl rounded first and Squid tacked right on the mark.. Unfortunately the wind shifted again and they couldn’t lay..!!! We couldn’t either so both skiffs tacked again and rounded on top of each other.. Tank Girl were having their own dramas with Dr Chicken arms ripping through a 40mm cheek block while hoisting the kite.. It went up, but it wasn’t quick.. The Wingman again found a lower groove than Squid and slipped inside them on the gybe.. We were chasing Tank Girl but the Breeze seemed to be fading… Not cool..!! Around the bottom Tank Girl lead with The Wingman in second and Squid 3rd.. The Wingman Tacked off early and Tank Girl covered.. We tried to get them in to a tacking duel but they pussied out.. I know Richard would have been up for the challenge..!! We played the shifts up the middle as the breeze was fading and big shifts and holes were appearing.. Tank Girl used their sail area to great advantage and sailed to the left hand corner.. We probably did 10 tacks on that leg and coming in to the top it all seemed worth it as we’d made up some precious ground on Tank Girl.. Woot woot..!! That was until we tacked on to the lay at the top mark which was tucked up inside Green Island and the breeze went in to single figures.. The Tank Girl sailed off with ease and we were left one stringing and hoping for a miracle.. We rounded a fair way behind Tankers and to his credit Craig had been able to hoist that big kite again without a pulley.. We chased them downhill and saw them gybe quite early.. There’s the split..!! We could see pressure coming and we were just waiting for it to reach us.. We gybed ahead of it on the lay and we started getting a bit giggly as that miracle we’d hoped for was about to thrust us to victory.!! Alas The breeze just sat on our transom.. It was so close we could almost reach out and touch it, but it was so far it never reached us.. Benny crossed our bow and finished 30 seconds ahead.. Of course we gybed through the finish and that’s when the breeze came.. We had a great ride up the leads as a consolation..

Well done to Tankers, you boys showed a clean pair of heels all day and deserved all three bullets.. Your nuts were bigger than ours and it paid.