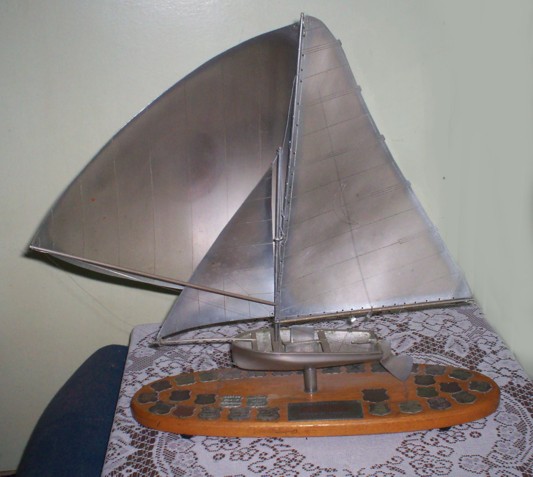 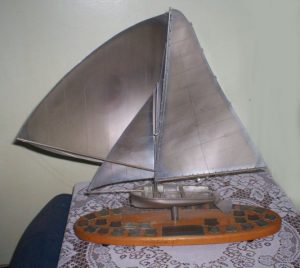 astest handicapped boat on the bay. The weather was grey and the wind felt like it was dying by the minute. Ghetto stuck with their 3rd rig, whilst PB, Squid and Tankers opted to sail up range 2nd. The banter started on the lawn and ended about halfway up the first work when Tank Girl crossed the fleet. You could throw Skinny’s G-String over all 4 boats. Guest newbie skipper and 29er dude Josh Franklin was steering the PB Towage and looked the goods in the flat water under King Island. PB first round the top, then Tank Girl, Ghetto Sled and Squid. PB hit the corner and Josh learned about gybing a 12 in overcooked 2nd rig and a few lumps. Over they went. Tank Girl got their kite up, got rolled by Ghetto, then laid down for a well earned rest…. Ghetto gybed early chasing a line of breeze and flat water and got to the bottom first. The next windward was uneventful, with PB making up some lost ground and Squid fighting to keep up with the speedy Towager. Ghetto was on the way to the finish with the kite up when an unbalanced gybe saw crew Crossy leap over the side. He decided to tangle his foot in the kite sheet, so the skiff couldn’t go on to the finish, and after what seemed an eternity trying to get the boat flat and Crossy back in the boat, they flopped over. The keen eyes on PB lit up when they saw the orange kite hit the water, but the endorphin rush must have made them black out because they sent it down the mine hard about 300m behind the sled. Terry and Wayne were having kite flopping issues at the top mark and Tankers dropped well back. Ghetto righted first and crossed the line with a large enough margin to take the handicap win and the beloved Ghetto Squid Trophy.!! 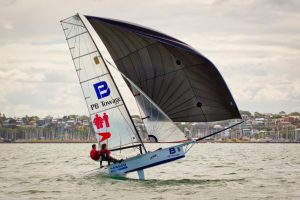 Race 2 started normally with all skiffs looking fast, then disaster struck.! A rain squall and over 20kts came across and created havoc. Ghetto tried to tack first and splashed around for ever. PB got through and sailed high above the mark from the 30 degree wind shift. Tank Girl footed hard and Squid followed suit. PB rookie skipper Josh must have thought he was on his 29er as a 2 string bearaway to get down to the mark in over 20kts without taking a step backwards on the gunwhale resulted in “the biggest mine they’ve ever done”. Tank Girl’s Ben and Craig watched as first the ton and then the jockey went flying round the forestay. Tankers needn’t have worried themselves as they soon found the water with a classic self-tacker on too tight splash tack. Squid was also having bear away issues, so Ghetto made some ground. The “run” turned into a 2 sail reach with PB making it first, then Squid with some awkward-looking dancing on the back tank by Terry. Ghetto closed the gap and passed Squid shortly afterwards, revelling in the solid 3rd rig. Tank Girl learned a thing or 2 about their new hull, with the foredeck getting a washdown for 90% of the reach. PB sailed away towards the top mark in the dying post squall breeze. The wind continued to shift around and despite Ghetto pulling clear of Squid, they rounded the final mark simultaneously. PB was halfway to the finish line and Tank Girl was still working up the beat. The “drag race” to the finish line with both crew to leeward with the kite up was as thrilling as the first 3 quarters of an NBA game. Ghetto held on for 2nd by a few lengths and Tankers brought up the rear 10 minutes later. A slow and painful death of what was overall a great day on the bay.