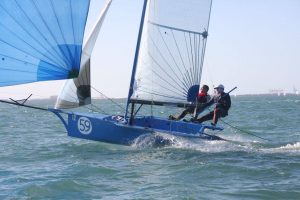 The forecast was for big rig, the obvious choice was big rig and the fleet put in…their biggest rigs.

Four starters racked up; Paulo and Tapo in ‘Giddy Up’ – big rig, Benno and Seano in ‘Tank Girl’ – big rig, Skinnyo and Jono on ‘The wingman’ – big rig and Joeleo and Franchesco on ‘skiffropes’ biggish second rig.   😉  .

The start line manoeuvres between Giddy Up and Tank Girl indicated that this was to be a tactical race.  The wind was a stable 8-10 knots, perfect for big rig.  Off the line Wingman and Skiff ropes were the first to tack onto port while Tank girl kept Giddy up from tacking before the lay line, Giddy up alternating between squeezing high and footing away trying to create some separation between the two boats.  Eventually Paulo and Tapo sat in the boat waiting for Tankers to pass or tack. After the tack, the sheets eased faster angle allowed Giddy up to roll Tankers and tack first for the top mark rounding. 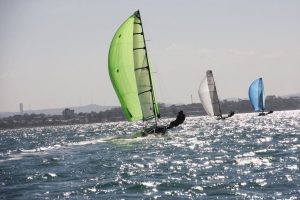 The Wingman earlier choosing to hang to the right lost out as the shifts and current were not favourable.  Skiff ropes were suffering with 2nd rig and rounded close behind in fourth. The spinnaker leg was a case of who could sail deep and fast, Giddy up just in front of Tank girl.  Tank girl’s only option was to try and roll Giddy Up, by the time they got to the overtaking position it was time to gybe and this left them behind once again.  Tapo’s 12’ skiff experience to this point had not included dropping the big kite, he thought it would be no different to dropping the 4th kite which he had done the previous weekend.  About half way through the drop the words;  “fffaaarrrrr-out when will this end” were heard.  This is where Tank Girl got their nose in front.  Wingman was next but not quite close enough to cause any trouble. 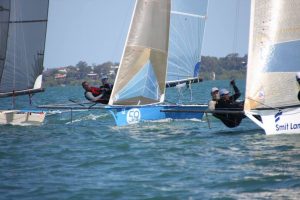 Not prepared to follow the leader up the next work Giddy up was first to tack and head left, Tank Girl Covered and were getting the better with a slightly different wind angle that allowed them to climb and get about 75m of separation. Giddy up tacked, Tank girl followed suit and were about 75m away and directly in front of Giddy up… And this is where the Moreton Bay mystery swell  and a slight wind shift came into play. Tank girl didn’t get it, Giddy Up did.  Giddy up sailed high and fast, Tank Girl not quite as fast. Tacking at the lay line,  Giddy up was 75m directly in front of Tank Girl.  Up went kites and Tank girl followed in the wake of Giddy Up.  The Wingman, meanwhile, had closed the gap and were almost close enough to be of concern to the lead pair. Skiffropes were hanging in there but were suffering in the lighter wind.  Up front both boats gybed together and with the wind swinging just enough, gave Tank Girl a favourable line to the mark.  Giddy up, to leeward, had to sail deep to stay out of Tankers disturbed air, this kept her well low of the mark. Eventually the wind eased a bit, Giddy up had to sail higher to maintain pace and this put them into Tank Girls disturbed air.. 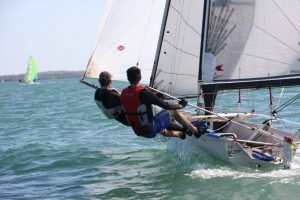 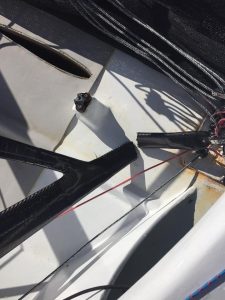 Race two saw 10 to 12 knots and the usual Giddy Up/ Tank Girl jostle on the start line. Skiff ropes kept out of it and got a clean start.  More wind equals more speed on Giddy up and just as they were about to roll Tank Girl…. tacked and went to the favoured right side of the course.  Around the top mark it was Giddy up with a comfortable lead over Skiffropes, who were enjoying the building breeze, then Tank Girl in third. Up go the kites and it was a procession towards the bottom mark, until the gybe when something always happens to Tank Girl when the pressure is on.

Until next time, may the wind always fill your jib.