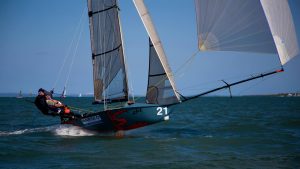 Another great turnout in Brisbane with the weather and the skiffs getting acquainted in style. Club champ points were up for grabs and it was a ding dong battle at the front with Tank Girl and Ghetto Sled match racing around 3 laps on the Waterloo Bay course. 10-15kts was forecast and big rigs went in, despite the outgoing tide and steep chop.

Newly-minted Brisbanite Paul O’Malley-Jones rocked onto the Squid for some fat boat lovin’ and showed some of his former speed to be in the running up the first work of each race. The opening race was abandoned after a timing error was made while a raft of canoes floated through the start line with 2mins to go. Ghetto and Pennyliss took off on time and were looking good until a kite set swim sent them all back to the start line for a redo. 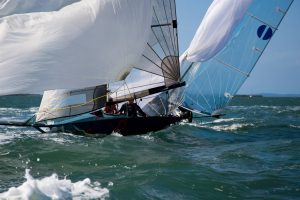 The “real” start was a jostling affair with the short beat to the top mark seeing Tank Girl sneak into the lead with Ghetto close behind. The Wingman was next followed by the Black Pearl (Squid) and The Flying Dutchman (Havoc), who dialled down, faced off and fires cannons. The experienced hands on Squid came through, while the Havoc was sunk. Carbon doubloons (rigging) were lost at sea and Havoc had to retire after another lap. 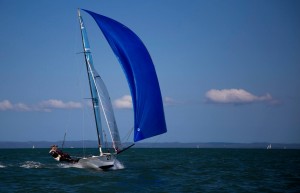 Ghetto and Tankers were battling hard for 2.5 laps with Ghetto edging in front downhill, then getting overtaken uphill. The last run to the finish had them round the mark together, Ghetto inside overlapped. Unfortunately, the finish layline was ‘mislayed’ and both boats had to drop kites for a sharp 2 sail back to the line. Tankers had the edge and took the win, ending the Sled’s undefeated status. Ghetto limped over, just in front of the flying Wingmen. Squid followed after a swim while Wayno did some triathlon swim leg training and that was all she wrote, with 3 casualties from rigging and crew failures. 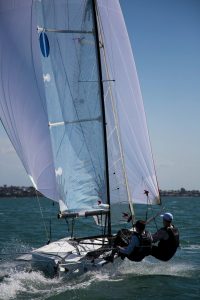 The second race turned the heat up from the get go and Ghetto sailed in a new gear to punch out to the lead. Tankers were close enough to slap a tight cover on and The Wingman and Squid following within striking distance for much of the race. All was looking good for the Sled with a handy 50m lead going into the final mark, but an unbalanced kite set brought it all undone and gifted the Tankers their second win of the day, Bradbury style. I decided it was worth swimming across to the rum line to see what fittings I could rip off as the Tankers fly past, but that turned into a cheeky high 5 from the grinning Guymer. Back on the boat and the Sled had to settle for 2nd, narrowly beating the wing men again.

A challenging mid-to-top of big rig day, that was an enjoyable battle once again 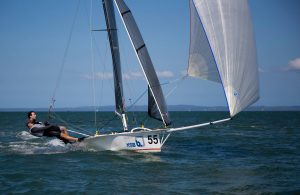 I’ll get you next time, Gadget