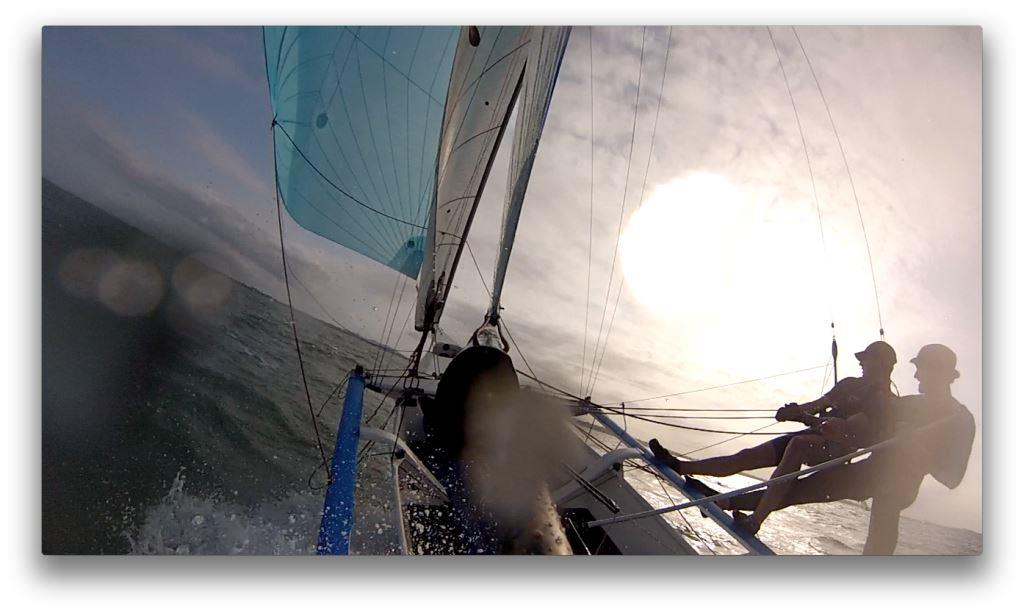 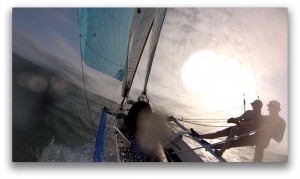 Tankers down a run. Ben smiling

Penthouse to doghouse on a challenging Northeaster.

Weather forecasts are always wrong. So when the BOM says it will be 15-25 NE in its Friday forecast and then 15-20 NE on Saturday morning, you’d expect at least 15 knots at the start line. Anyway… 2nd rigs went in as the wind was feeling a big light on. Ghetto, Tankers and the Squid were lining up on the lawn for what should have been a sweet overcooked, flat water ride. As Ghetto hit the water, it was feeling a little soft, but heading out the leads a nice 2-string windward with potential to build was OK. Then the breeze arsed out…. 1 string… Tankers and Squid hobbled by the incoming tide… Ghetto gets to the start line with minutes to spare, but Tankers and Squid are nowhere to be seen. Ghetto wins the start..!! Pin end on port. Chugging slowly up the course in the now pretty sick Easterly.

At the top mark, 20 mins later, an extra soft section of the course under Green Island, Ghetto rounds first by half a leg and teabag capsizes in to windward because there is not enough breeze to sit on the gunnel. Righting a skinny boat with no wind is not easiest thing to do. Once that was sorted Ghetto BLASTED down to the bottom and the rest of the race was a bit of a drag. 1hr 20mins… Win by 6mins to Tank Girl then Squid. The wind had started to fill on the run to the finish..!!!!

Race 2: The wind was now a steady 15kts and had swung a little North. Game on. Ghetto once again hit the pin end on port with Squid following close behind. Tankers must have initially missed the north shift, because they started mid line on starboard. Ghetto and Squid blasted out to the right, drag racing a couple of gin palaces to not get run over on their way to Peel Island for… a few gins. Tankers split left and when we all headed back to the middle 3/4 up the course they had a 200 metre lead. WTF..!! Further north shifting paid for the Tank Girls and they were smashing along in the starting-to-get-lumpy seas and solid breeze.

Round the first mark Tankers were up and gone and Ghetto, with a last minute knot in the main sheet couldn’t ease through the bear away and dived through a double up. The chop was still coming from the east , but was being supplemented by the same from the north, creating a bit of an obstacle for the run. Squid, with fill-in crew Rilke De Vos, rounded smartly just as Ghetto got up and going. Tankers was near the bottom mark as it was now a straight run between the marks. 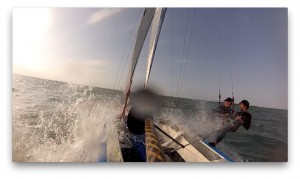 The second lap went by without incident, Ghetto and Squid seemingly gaining on Tank Girl and they must have eased off the throttle. However, the wind was now gusting 20, and the chop had tripled up, making the sailing… fun but challenging. Another splash-tack for Ghetto and Squid was right there. A splash pulling the 100L of water plus the kite up saw them slide past. Killer ride to the finish on the ear, Rilke yahooing and screaming, and that was that. Tankers wins by 6mins, Terry and Rilke safe as houses 2nd and the death or glory crew on Ghetto succumbing to a fast death.

2 sail home was also a bit “challenging” at the angle of death. Tankers mined near the leads and Squid drove through a few beefy ones, Rilke smiling like a madman. Ghetto going Volvo70 style with all the ropes on the floor getting sucked out the back by green water.!!

Good times, need to see a few more boats on-the-water to make a graveyard on days like that.