After the crazy rides we had last week, the boys were pretty pumped for the weekend.. Unfortunately Hughie was keeping his cards close to his chest and the forecast was for a pretty lame day of ENE big rig.. The Tank Girls Benny and Craig were happy because the good doctor had to work on Saturday so the lame forecast made it easier for them to justify missing a day on the bay.. HA..!!

Fortunately as the morning rolled on so did the breeze..!! It steadily built and built until it was no longer big rig! It continued to build and by lunchtime it was a delightful 15kts and stayed there.. 2nd rig..!! Yeeha.!!

The four 12’s threw in 2nd rig and were actually getting a bit excited.. Was it going to keep building..?? 3rd rig..?? The Pennyliss boys took the gamble and pulled out 2nd and put the little mast on the boat.. Not a bad move for their first time sailing together..

Ghetto hit the water first followed by The Wingman.. Squid and Pennyliss were held up by some tardy 18’s.. 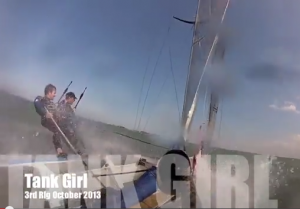 The start was 1400 and the gun went at 1400.. Shame the Squid and Pennyliss boys were still coming out of the harbour at that time.. Ghetto and Wingman were there though and the match race was on… Richo and Crossy won the start by a few seconds.. Sorry John, totally my fault, will nail it next time.. They were heading off on Starboard tack but on board The Wingman, we found a new groove the emperor would be proud of.. (Yes I went there, and yes I’m proud of it!) We were going higher and faster and when we got to the corner Ghetto tacked first.. The Wingman was well inside so the decision to tack on them was easy to make.. We went in to the tack with plenty of pace and came out with none.. Oops..!! Ghetto managed to sail out from under us and then squeeze up on top of us..!! What the hell..!! It was the complete opposite to the previous tack with Ghetto having all the height and delight.. We got to the top mark with Ghetto tacking on the lay line inside us.. We rounded within 4 or 5 seconds of each other and the pressure hoist was a walk in the park for both boats.. Within 3 boat lengths of the top mark both boats had their kites up and were sending it South towards the bottom mark.. There wasn’t much in it and when we got to the corner, Richard gybed first.. John and I waited a couple of seconds before gybing hoping to come in that little bit hotter.. Alas both of us got a gust and were now heading well below the mark.. Ha..!! The rides were intense but great fun..!! We got to the bottom and John and I decided to ditch it first and hopefully cut the corner.. Inside Richard.. We did just that and called buoy room on the Ghetto Sled.. Unfortunately Richard again found that Port tack high mode and sailed out from under us..!! We sailed along closely for a bit with John and I just trying to hang in.. But we knew our efforts were futile and as a gesture of appreciation I gave Richard a quick tap tap tap on the life jacket with my bow pole and then aborted, pulling back and low grooving to get out of their wind shadow. We decided that these boys had an edge on us on port tack so figured we’d lure them on to Starboard.. We tacked and they followed.. I love it when a plan comes together… We tacked again and they once again covered.. TACKING DUEL..!!! We did this for a while and The Wingman was back in the lead..!! Woohoo..!!! Unfortunately we were now a fair way North and there was a long port tack to get us up to the top mark.. Ghetto capitalised and we rounded the top mark almost exactly the same way as the first lap..!! Grr..!!!

Kites were up as was the chop.. Wind against tide on the bay is awesome..!!! We bounced our way downhill chasing Richard and Benny like the cats they are.. For those of you that have raced 12’s here in Brisbane, you may not be surprised to hear this next bit.. The RQYS etchells were finishing their race and of course their finish line was right in the middle of our course.. Ghetto headed straight in to the eye of the storm while on board The Wingman we decided the gust we were in was good enough to stick with so we gybed before getting too involved in the etchell fleet.. We nailed the gybe and shot off down the course.. The time came again to gybe for the mark and we gybed again in that same gust.. GAME ON..!! We were right on the lay and screaming in hot.. We yelled at Ghetto again and did a perfect gybe, drop, dump on their sorry asses.. The Wingman was BACK IN THE GAME..!! That was until Ghetto did their now very annoying port tack glory ride.. They came up over us again and man it was annoying..!! Tacking duel. Take two..!!! We tacked, they tacked, we tacked, they tacked.. The Wingman was again in front..!! Well so we thought… Richard and Benny were sailing off on a shocker of a knock and so John and I tacked to extend our lead.. Unfortunately that knock Richard was sailing into was a 20 degree wind shift and with it came 3-4kts..!! The Wingman was on the wrong side of the new breeze and Ghetto slammed the door in our face..!! They rounded the top mark with the biggest lead of the day.. When we got to the top (20secs behind) it was an 18ft skiff graveyard so we couldn’t even put our kite up straight away to chase them down.. BUGGER..!! The reach to the finish line was tight but makeable.. What a ride..!! What a race..!! What a day..!!! We crossed the finish line with massive grins and big congratulations to the Ghetto boys.. They sailed mistake free and the dogfight was awesome to be a part of..!!

With the new breeze set in the second start was in top end 2nd rig.. The course hadn’t changed so a port end start was the call on board The Wingman.. With 20 seconds to go we went for a hot bear away to hit the line with max pace.. Unfortunately a shaft appeared right in front of us and the nose dug in.. We almost saved it but ended up flopping on our side.. Watching Squid and Ghetto power over the line from our c’board was pretty messed up but we got her back up and decided to chase them down.. With the wind the direction it was there were no tacks, just straight to the top mark.. Ghetto rounded first.. We caught Squiddy and went around in second but a fair way of the pace.. John and I decided we’d had enough and just went for a ball-tearer of a ride.. We went straight past the bottom mark, through the finish line and to the bar.. Terry must have had a pretty awesome ride too, except his came at a cost.. His shiny black pole is now two shiny black poles… SENT and BENT.. Not cool man..

So this weekend the skiffs are on tour..!! We’re going to flash mob Bribie Island and show they guys up there what we do and what we’re about.. Having never sailed in the passage, I am pretty excited.. Should be a good show for the locals and here’s hoping we get some breeze because I’m told there are some serious ramps about if the tides right.. BRING IT.!!!