What a weekend of skiffing..!!! 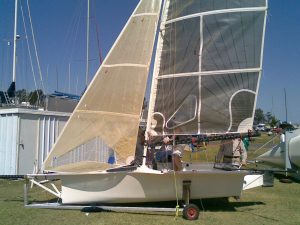 PB Towage on its launch day back in '07

Saturday was a day of champagne sailing.. !

With only four 12’s on the water, there was plenty of space out there.. Funny how with the whole bay to use, you could throw a blanket over us the whole time..

Race 1 was delayed, but Squidgee still missed the start.. I shouldn’t be critical, Trisso and I were at the start line and missed the gun too.. Really have to get that starting watch STAT! Richard and Ben on Ghetto Sled shot off low grooving the hell out of it.. They were remarkably quick considering they only had 3rd rig in.. PB stayed high and were able to cover Ghetto at the corner.. The Flying Animals were next up the course and Squid back in the distance were trying to cross that start line… At the top mark it was PB followed closely by Ghetto and then Flying Animals.. Squid were still trying to cross the start line… The breeze had a few holes in it but wasn’t too bad.. The puffs gave us some good flat water speed downhill and with the bigger 2nd rig kite, Tristan and I on PB were able to go lower than Ghetto and gapped them by the bottom mark.. The course length was spot on and the gate was a cracker! The drop was uneventful, as was the rest of the race.. PB won with Ghetto in second… Squid managed to pip the Flying Animals by the finish which rounded out the podium.. Like I said, it was magical conditions out there..

Towards the end of the first race the wind came in a tiny bit.. Good news for the 3rd rig bandits on Ghetto..!!

The start of the second race was well and truly won by Squid.. They hit the line with pace and were about 15 degrees higher than anyone else out there.. Both Ghetto and PB gave them a solid 10m head start too.. Gotta get those starts cranking lads.. Shocking.!!

PB and Ghetto went low and super fast while Squid climbed their way to the heavens.. PB managed to squeeze up over Ghetto and when Ghetto tacked, PB covered.. Squid was the next target.. At the top mark it was anarchy.. PB coming in on Starboard.. Squigee squeezing in on port.. A flying 18 footer coming in screaming get out of the way..!! It was all happening..!! I lost my back foot coming in to the bear away.. How we managed to stay up is beyond me.. I ended up sailing back to back with Tristan..!!! We got it together only to see the 18 come over the top of Squid.. We went above them both for the old set and forget..

Ghetto were close behind and also had to pinch high to get around the mess.. Lucky they were only carrying 3rd rig.. Squid were seriously tea bagged, I don’t know how they didn’t swim..!!

PB headed off on starboard, Squid threw in an early gybe to try and get the inside line on us.. Ghetto were sailing hard to keep on our heels.. The cross at the gate went PB’s way and we sent it hard down to the bottom mark.. The breeze had come in a bit and we had a few good little squirts with the kite up..

PB rounded first with Squid close behind.. PB lost any ground we had made on their opposition when I picked the wrong line for the last gybe and had to go low and slow to get around the bottom mark.. Damn! Oh well.. makes for some close racing..!! Squid were again on their high groove and PB shot ahead in super speed mode.. We waited and waited for the others to tack off but they followed right to the corner.. Ghetto tried something different and went left.. Good call I’d say.. They managed to pick up the Squid by the top mark..!! Back downhill and PB again gave themselves a bit of breathing space with a pretty quick set.. Squid took back their spot in second place by the bottom and again Ghetto was third.. PB covered Squid out to the right again and Ghetto went left.. Again it paid and they over took Squid.. Again… PB set the kite for home and it was in that same order for the finish.. PB, Ghetto and Squid..

It was a gorgeous day out there.. Perfect racing conditions.. We just need a few more boats on the water..!!

Looking forward to or next race..!! 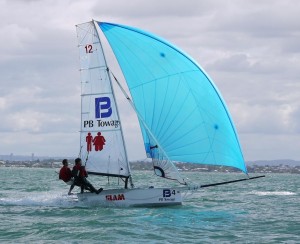