It’s been a year since the Brisbane 18 footers tragically lost one of our own out on the race course..  To honour our mate Casper, we held a small on water ceremony before the start on Saturday. A wreath was laid on the start line and the skiffs reflected with a minutes silence..

The first race started in a delightful 15kt southerly.. Ghetto Sled and The Wingman had new combinations on board with B-mad pulling Richards gear, and Jono stepping off the 9er to co-pilot the wingman.. Both skiffs took the conservative approach and were rocking 3rd rig.. Squid, with super sub Paulo, we’re having none of that bottom end rubbish and had plugged in Terry’s brand new 2nd rig.. It’s becoming quite the tradition that owners miss out on the first sail with their new threads.. Terry has injured his shoulder and will be sidelined for a few weeks.. Shame bro, your fancy new sail looked wicked on the water..!!

So back to the racing….. The three of us 12’s were joined by a couple of 18’s and the start line was spot on.. Ghetto got the jump but both Wingman and Squiddy were hot on their heels.. Ghetto tacked first and headed right for some tide love.. The Wingman and Squid pounded out to the left.. Coming in to the top Ghetto had rights over Wingman and Squid so we ducked them and rounded in that order.. However a slick hoist saw the Wingman snatch the lead from Ghetto soon after.. The three skiffs smoked downhill however the Wingman had a brain fart and saw the wing mark so decided to try and pinch up to it.. Ghetto laughed as they slipped up the inside and took the lead back.. Ghetto and The Wingman gybed together but under laid the bottom mark.. Squiddy kept on charging and gybed to come in hot.. Things were getting interesting..!! Ghetto got a nice puff to scoot clear ahead of The Wingman and rounded the bottom mark in first.. The Wingman managed to squeeze in front of Squid but there were only inches in it.. Heading back to the top Ghetto tacked off to some pressure on the left.. Squid and The Wingman went right hoping the tide would be on our side.. The tide was strong, the breeze not so much.. The 2nd rigged Squid were able to climb up inside the Wingman and by the time we tacked they had a nice little lead.. Ghetto had enjoyed the breeze on the left and managed to stretch their lead a few boat lengths.. In the dying breeze on the right side Squiddy capitalised and sailed higher and faster than the crouching Wingman.. At the top Ghetto lead Squiddy but not by much.. The Wingman was next but were struggling still for pressure.. Did I mention the breeze had dropped to 10kts gusting 15..?? Well it had, and as young Joshie would say, 3rd was a bad life choice.. After the last run we thought a quick two sail reach might be useful to clear the wing mark.. Both Ghetto and Squid were squeezing high to get around the wing mark.. We had a crack but the breeze was lame so we ended up over shooting the wing mark by a mile and giving the other lads a nice lead.. Around the bottom Ghetto had managed to hold off Squid and we rounded in that order.. Ghetto tacked off early to find the pressure they needed to keep Squid at bay.. Squid followed them to the left leaving the Wingman to have a crack at the right.. It didn’t help the cause and The Wingman was 1 stringing for a while.. The gap got bigger…. Ghetto and Squid were having a blast on the left with Squid throwing everything they had at them.. Ghetto rounded the top for the last time in first with Squid charging in 2nd.. Ghetto set the Orange kite and managed to stay between Squiddy and the finish to get the gun.. The Wingman followed on to finish in 3rd..

Between races the breeze looked to be dropping further much to the disliking of those fools with 3rd rigs in.. However with a minute to go a line of breeze came down the course and by the gun we had a nice 12-15kts.. Still not great for 3rd rigs but we were powered up enough to be 2 stringing.. The Wingman hit the line with pace and won the start.. Ghetto and Squid continued their battle from the previous race and gave the Wingman some breathing space.. Ghetto and Squid tacked off first with The Wingman hitting hard left with the 18’s.. At the top The Wingman had a handy lead over Squid who was followed closely by Ghetto Sled.. The Wingman sailed straight in to a hole and we watched as the other two made big gains.. Around the bottom it was tight with the Wingman still in front, with Squid still holding out Ghetto.. The Wingman found a line to tack on and headed left.. Squid was flying high and tried a sneaky lee bow on The Wingman.. Things were pretty tense as the breeze had dropped a couple of knots and The Wingman was semi crouching.. A line of breeze eventually came and that was enough to get the little 3rd rig powered up again and The Wingman shot out over the top leaving Squiddy to suck on our wake.. Ghetto followed the fleet and around the top we kept that same order.. All skiffs made it easily to the wing and gybed in roughly the same spot.. The ride to the bottom was the best of the day with all three skiffs lined up and the puffy breeze hitting each of us individually and towing us 30 degrees every time.. We rounded the bottom in that order and the final windward leg was a carbon copy of the previous, well it was for The Wingman and Squiddy… The two leaders went right for the first 3rd and then headed across to the left on a line of pressure.. Ghetto kept sailing hard right.. At the top The Wingman had slightly extended on the fleet but the big movers were Ghetto who must have been sailing fast as they picked up Squid to get around the top in 2nd.. Ghetto held off a late charge from the Squid boys on the run to the finish to secure second place.. All in all it was super tight racing on a special day for the boys.. It’s a shame there weren’t more skiffs out for the occasion but sometimes it’s about quality not quantity.. Yes that was directed at you Benny G..

I’d personally like to thank the Brisbane 18footers club for the day.. I would have enjoyed it more with second rig in, but at the end of the day it was a fantastic way to honour our mate Casper. Good to see a couple of 18’s on the water too.. Although Joshie, we’d like to see Havoc to be back on the start line next week.. 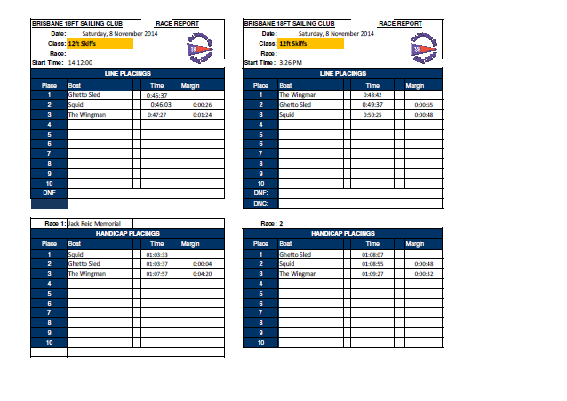