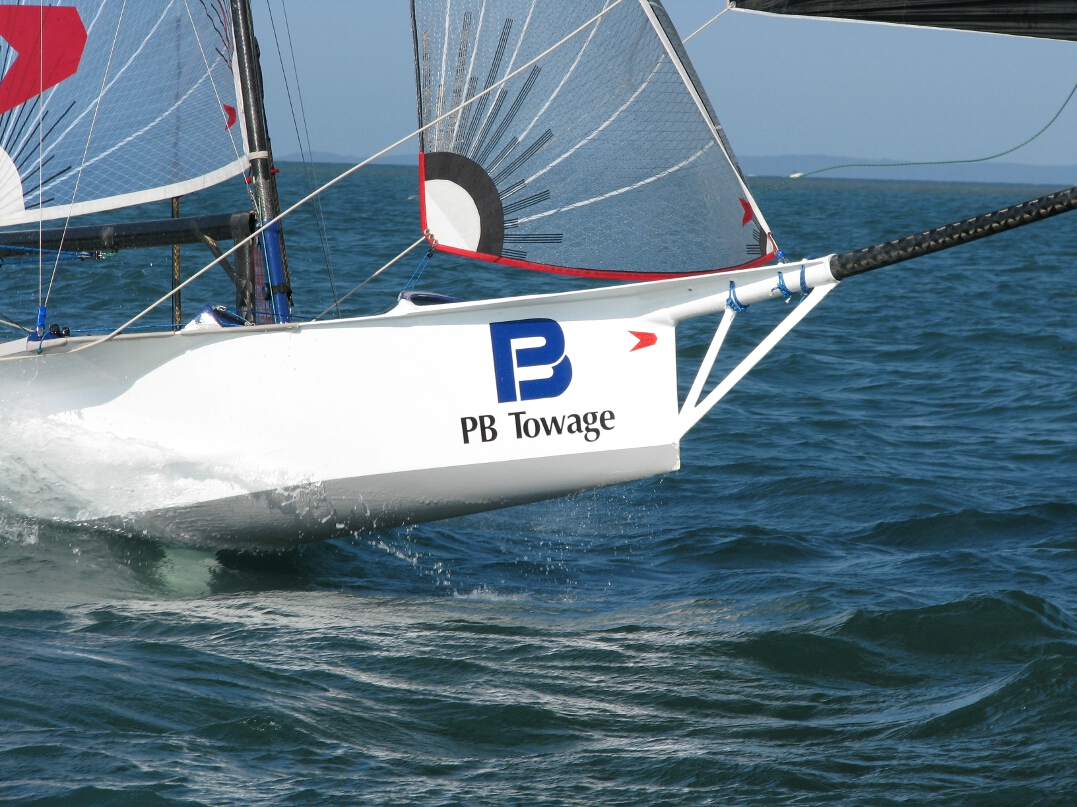 Have you all recovered from that epic day on the bay.??

Well wasn’t it another amazing weekend for those of us ON THE WATER..!! Perfect blue skies.. 27 degrees and a solid 15kts from the North.. Wouldn’t be dead for quids..!!!

The rigging lawn was chockers.. With five 12’s on their side, and four 18’s, it is starting to look like a real skiff club..!!

The 12’s were split down the middle rig wise.. With a 15-20kt forecast Ghetto Sled and ASM went for a safety conscious 3rd rig day, while the cowboys onboard PB and Squid opted for a top end second rig..!! The tide was coming in like crazy so it was pretty flat out there.. Speedy speedy..!!

The first race was delayed for tardy starters.. We eventually got underway and it was Squid who got the gun.. Ghetto Sled once again did their port hand bandit thing but it didn’t really pay.. Squid and PB headed left straight away to get out of the tide.. Both boats were showing good speed to windward and there was not much in it…. With the wind in our hair, plenty of height and speed, spirits were high on PB.. Until that horrible sound of carbon scraping the ocean floor was heard.. We were on the bottom..!!! Squid quickly tacked off but we were stuck fast… DAMN..!! Our new Bushido c’board is a little bit longer, and I can tell you it did not just kiss the bottom, they made out like 16 year olds at a school dance..!!

We finally managed to tack her around and sail off the bank but we had been pushed back to 4th place.. Lucky for us, the starting committee set a marathon course and by the top mark we had found ourselves in second place behind Squid.. ASM and Ghetto Sled were not far behind.. Both of these boats spent time up the middle of the course, and found themselves pushing tide..

So the kites went up and Squidgee were looking famous..!! First race of the season for them and they were first to the top mark.. Woowoo..!! They gybed early so as not to run aground.. PB followed suit.. The ride was fast and the boats were flying.. The boys on Squid were having way too much fun and missed the next lay line by a mile.. PB cut inside them and sailed straight to the bottom mark.. Squid had to drop the kite to get back to the mark.. UNRUCKY..!!

So it was PB leading for the next lap.. Squidgee in second and then Grove not far behind… Trouble aboard ASM had them two sailing to the bottom mark from a long way out.. UH OH… Fortunately for them, Ghetto had a slow drop.. When I say slow, I mean the kite came down faster than the retrieval line was being pulled and the kite went under the boat… Splash…..

PB showed their class by sailing a solid second lap without hiccup to take the win by 1min 27 seconds over Squid.. ASM was next and Ghetto Sled brought up the rear. A quick debrief after the race, and the course was shortened.

The breeze kicked in a knot or two and the boats carrying 3rd rigs were looking quick… A little bit of controversy as to whether ASM were over at the start, but as there was no individual recall issued, we can only go by the starters call.. Sorry Benny..

ASM got the gun and headed left.. They had plenty of pace and were looking pretty. Could this be the 3rd rig race they were banking on..?? Ghetto did their signature port start ducking the fleet.. PB and ASM headed North.. PB had good height and by the first tack ASM had to duck us.. PB tacked not long after.. Ghetto and Squid were having a duel of their own up the inside of us.. ASM were looking fast until they stopped for a quick tea bagging.. Not sure if someone pissed in their wetsuit and needed to rinse off, or if there was a communication breakdown.. Couldn’t tell from where we were.. Either way it was enough to give PB some breathing space and we were first around the top.. ASM were not far away though.. Squidgee was next followed by Ghetto Sled. The drag race down to the bottom mark favoured the 2nd rigs, but ASM showed a super clean pair of heels and held on to us.. PB rounded quickly and kept a relatively close cover on ASM.. Squid and Ghetto were chasing but the gap was too much.. Around the top for the final time and it was PB, ASM, Squid then Ghetto… The wind was up and the fleet flew down towards the finish… Things were looking solid for PB.. We went through the final gybe with no problems and were scooting straight for the finish line.. Just another day at the office.. Or so we thought… That’s when we got hit by a black one… Suddenly we were heading 15 degrees below the finish line.. Bugger me..!!! ASM had gybed a bit earlier and were charging straight at it…. We had to do a quick drop and two sail to the finish… There is no more anxious feeling than two sailing to the finish line when over your shoulder you can see the second placed boat hurtling down towards you at full noise… PB managed to scrape through with the victory making it 4 from 4 for the season, but only by 36 seconds.. ASM were 1min 4 seconds ahead of Squid and Ghetto were a couple of minutes behind them..

The exhausted crews hit the beach and shared war stories over a beer.. What an awesome day on the water.

With the cherub QLD state titles being held next weekend, we’re looking for more starters.. It’s a good opportunity for us to show those youngsters which skiff class they should all move in to.. Allwood Sails and Challenge came close to starting this week with both skippers coming down to the park on Saturday for a look.. The weather is getting warmer and the racing is already scorching hot.. Get excited boys and girls..!! Come out and play..!!