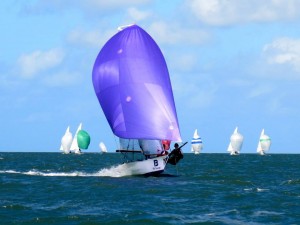 What a day, and what a turn out it was for the Jack Reid Memorial..!!

The Christmas break is officially over with 6 skiffs challenging for the coveted trophy. We decided we would make it a best of 3 sprint races and it was game on from the first gun..!! Everybody put in 3rd rig except Brendan and Joel as they are racing rakes and figured they needed the extra rag to keep up..

Race 1 saw all six skiffs hit the start line with plenty of pace, The Wingman had the boat end narrowly missing the bouncing outboard.. John had kittens but I had it all under control.. We headed left with The Wingman pinning Squid and Ghetto. Squid was hot out of the block with The Stig making a cameo on the helm while Terry was strutting his stuff at Rocky Horror.. They tacked first and ducked the fleet. Ghetto tacked next with The Wingman covering. Coming in to the top mark and Ghetto tacked for the lay. The Wingman did a sneaky leebow to round first. Allwood started late after swimming for the old trapeze lines and had lost their way and headed for the 18’s mark.. Oops..!! Squid were right on our tail and Pennyliss following them. Ghetto made their move and performed a perfect hoist and roll.. The Wingman were left to eat their wake..!! Coming in to the gybe and it was our turn to hit back. We gybed on top of Ghetto and slammed them back in to second place. Squiddy was coming up fast too and Richard and Benny did well to hold their spot. The Wingman went straight through the finish to take race 1. 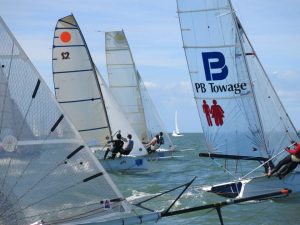 Race 2 was looking a little shifty.. The breeze had shifted East a little and with the massive tides we wanted to head right.. The port hand bandit move was just too tempting for The Wingman.. Again all 6 boats were on the line and charging.. The Wingman got through Squid but unfortunately for us we just weren’t going to make it past a flying Ghetto Sled or Allwood Sails.. Big duck was in order but we were heading right as planned and confidence was brimming from both skipper and crew.. Allwood, Ghetto, Squid and Pennyliss went left and that made it a little bit lonely out on the right.. Especially when the breeze got a little lighter.. However when we got to the top it was Allwood around first followed closely by Ghetto and The Wingman. Pennyliss and Squid battled it out for 4th and BMad and Bronson on The Cougar made their way up there too. As we skipped our way down to the corner John and I noticed a lovely little Southerly puff coming our way.. We gybed first and sent her straight for the finish.. Ghetto and Allwood were a little slow on the uptake and kept on charging.. By the time they gybed it was too late and they had to ditch their kites to make the finish line.. Squid came home strong and again Pennyliss were right in it. 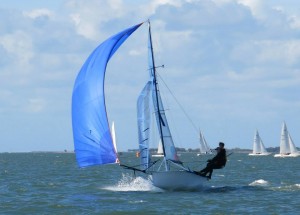 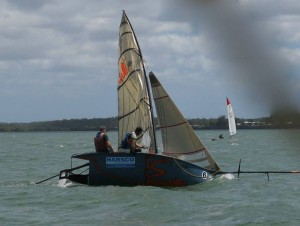 The 3rd and final race was going to be a two lap screamer using the 18’s marks. Once again all of us were on the line with pace and looking good.. Ghetto got a little rolled by The Wingman and they tacked off first. The Wingman wanted to go right too so covered them. Allwood, Pennyliss and Squid headed left.. Game on ladies.!! Unfortunately for us the breeze dropped 5kts.. On the left side of the course Brendan and Joel dropped it down a gear and took off.. On the right Ghetto tacked on the lay and The Wingman covered.. We were down to one string and things were looking grim.. At the top it was Allwood Sails followed by clear air.. Pennyliss were flying in on port but The Wingman was in no mood to go easy on the rookies.. They tried the old leebow but alas they were too low and slow so we rolled over the top to round in second place. Ghetto Sled were next around and when the kites went up they gybed first.. Another split.. The Wingman thought we were in ok pressure and out of the tide so continued.. Allwood had blitzed the field and pulled up stumps after one lap. For the rest of us however, we had another lap to go! Coming in to the bottom mark Ghetto had caught up.. They rounded just ahead of The Wingman and the final beat was setting up to be a classic match race between the two sister ships. Ghetto finally had some clear air and the crew loved it..!! The Wingman tried to free up a little to get through them but the lads on Ghetto were not having a bar of it..!! They found their groove and stuck in it. We buzzed the laser fleet as we worked our way back up to the top but Richard and Crossy had the goods and rounded first. The Wingman watched as the orange kite went up and they took off.. The only thing that was going to safe us was a big wind shift or if Ghetto choked.. We hoisted the kite and watched their every move.. It wasn’t until their final gybe 50m from the finish that we saw any hint a mistake.. They almost tea bagged and then did a pretty funky gybe which I’m led to believe involved gybing with a foot..!! Our hearts started racing but the boys were able to save it and take the win.. Pennyliss sailed a good race to take the handicap and Jack Reid trophy.. their first as a new team.!! 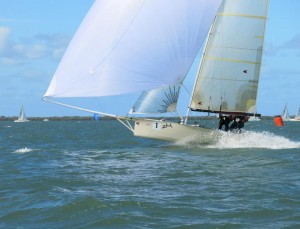 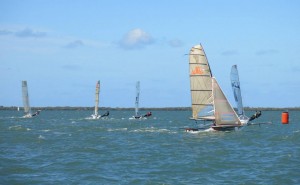 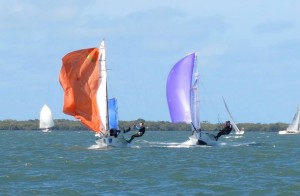 A fantastic day on the water and the 12’s racing now being incredibly close..!! There seems to be nothing in it between the boats, and everyone is embracing the competitive spirit..!! Looking forward to the return of Tank Girl in the next couple of weeks.. Another skiff to beat..!!