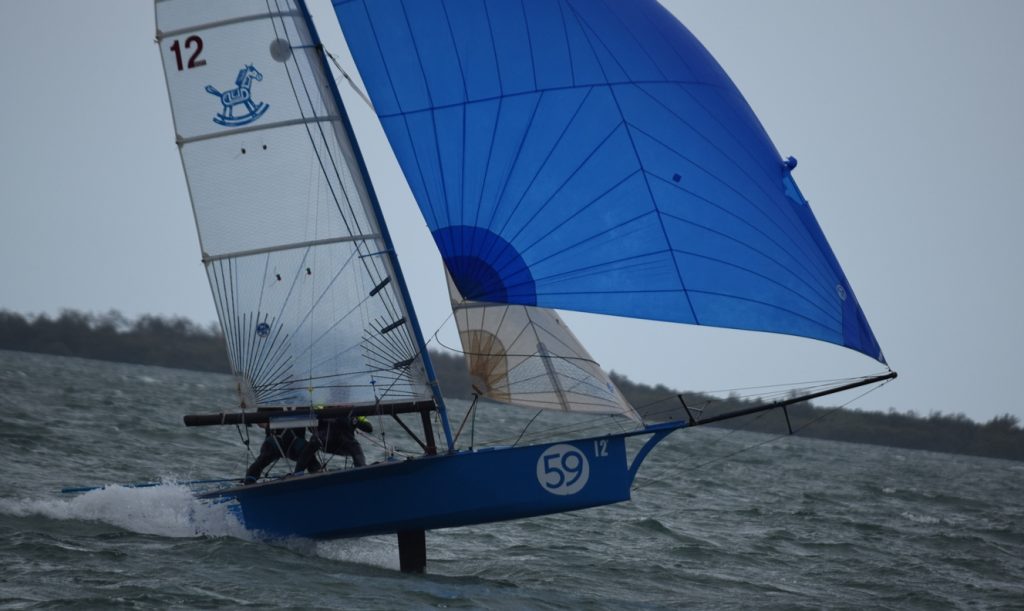 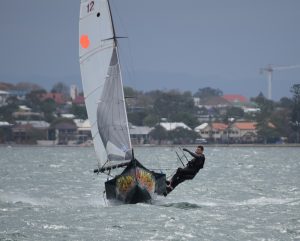 Ghetto rounding up at the bottom mark

The forecast was good at 18 to 22 knots northerly with outgoing tide…maybe a bit lumpy.

The start line saw Giddy Up, The Wingman, Tank Girl, C-Tech, SkiffRopes, Donkey on the Edge and the very cherub looking Icky Thump lining up in 20knots.  As is usually the case arising around University and High school exam time, five of the boats had ring in crews.  Baptism of Fire – quickly extinguished by a face full of spray.  Racing up the first beat was close with the first four rounding the top mark together. C-tech, Giddy-UP, Tankers Wingman donkey and finally Icky Thump who appeared to have forgotten one trapeze harness.

The downwind was fast and furious, and the gybe in the lumpiest bit of the bay, as usual.  The big mover was Wingman who with depth and speed got through to round the bottom mark first. C-Tech capsized in the gybe/drop and Giddy up avoided the crash to round second.  Back in the fleet Tank Girl and Skiffropes were sorting out the coordination issues of new crew combinations, Donkey were wondering what that loud bang was before retiring with a broken backstay and the Icky Thump kept at it. 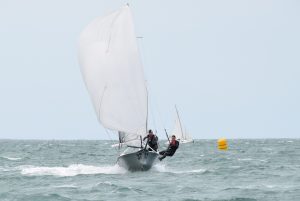 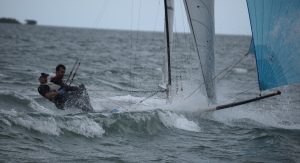 Ben and Shaun in the power boat wake

During the intermission, the breeze increased to 22-25knots. Whoop whoop says the 4th rigs, I’m not scared says the 3rd rig.  The start line was very busy, the sort of busy where you ease the main and the skipper two boats over gets hit in the head by a boom.  Off we all go and the fleet splits, half left, half right with the end result being every one arrives at the top mark together.  Tank Girl is first to get the kite up (crew with 9’er experience knows how to hoist fast) and off they go surrounded in spray, C-tech next and still quick when one string, Wingman on their hip and having to sail higher than optimal so as not to run into C-tech, Giddy Up not two boat lengths back and Skiffropes charging with her new Kite but still a little uncoordinated.  At the gybe Tankers crashed, at the drop Wingman and Giddy Up both capsized in unrelated incidences and somewhere down that run Skiffropes also had a quick splash.  This left C-tech leading… the rookie…looking down the barrel of their first race win.  All they had to do was stay upright for one and a half more laps.  On the next lap the fleet did bunch up again.  On the windward leg C-tech went left when the better option was right, which was where the rest of the fleet went. Giddy Up was moving quick but not as comfortably as Tank Girl and Wingman with their 4th rigs.  These three rounded the windward mark together just behind C-tech who had suffered while going left.  Another charging run to the bottom mark and the first to fall away was Tank Girl with another capsize.  Up the last work C-tech loosely covered the fleet as best they could. Giddy Up hung to the right in the flatter water, Wingman gambled on heading up the middle and Tank Girl and Skiffropes also headed right. At the top mark C-tech was comfortably in the lead, Giddy Up had benefitted from Wingman going the non-preferred side.  The maiden win for C-Tech was imminent until the last gybe where it all fell apart.  They had picked the gybe spot perfectly as Giddy Up used them as the mark to gybe around and take the bullet.  C-Tech recovered for second.  Then Wingman, Tank Girl, Skiff ropes and finally Icky Thump who had obviously suffered without a second trapeze harness.

Next week- State titles. Guns on the table.