Forecast was for more than we could see on the water.

Ghetto sled turned up with only 3rd rig expecting a big blow, Tank Girl turned up without a big rig not expecting a drifter, Squid, Skiffropes, Donkey on the Edge and Giddy Up all had the full range of rigs.  Squids fill in crew, Tim the kiwi, was mesmerised by technology and just had to try and touch the pretty patterns visible in a spinning fan and was a late withdrawal as the hospital beckoned.

Using his influence, Ghetto Sled instructed the B.O.M. to post some decent wind at the airport.  17 to 19kn appeared on the smart devises and everyone put in third rig.

Once we were out of the lee of the break water and into the open air it was obvious that 2nd rig would have been better, big rig even better again.

The Start line was positioned on the lumpiest part of the bay and all five racked up. Giddy up almost capsizes to windward as they cross the line, Skiff ropes got buried and Donkey, Ghetto and Tanks all had clean starts.  Ghetto and Tanks got their stuff sorted quickest and were able to get clear of the rest by the first mark, it looked they were going to have a dingdong battle.  Giddy Up, Donkey and Skiffropes were close enough to each other to be having a race within a race.

Upwind the big decision was which bit of the bay to sail in.  Hang to the east and have to deal with chop and other classes but have slightly more constant wind and pushing less tide.  Head right and have less wind, flat water and push more tide.  Either way worked to varying degrees at different times.  Down wind was similar but the other way around for benefits/dis-benefits.  For a while Ghetto was in front, went the right way (wrong way) once too often and Tanks was able to get in front and stay there. 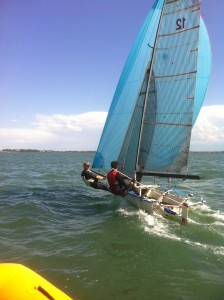 After concertinaing all day the boat 3, 4 and 5 all came together half way up the last work, it was a drag race in slowmo.  At the top mark skiff ropes tacked first and rounded third after skipper Joel jumped out of the boat, he simply climbed in the back as the boat bobbed past.  Donkey had the inside to bare away first, Giddy up bared away second and gybed around the mark. Skiff ropes politely waited their turn.  Three boats within 5 seconds.  Up go the kites, Skiff ropes and Donkey heading to the choppy water and less tide, Giddy up heading to flat water and more tide.  Gybes happen and halfway down to the finish all three boats come back together, Giddy up gybes to cover Donkey and it’s a battle of who can get the most out of nothing. All three gybe for the finish at the same time.  Donkey is in the right spot and takes it by a second over Giddy up with Skiff ropes two seconds back.

Between the two races the wind begins to build, as does the storm clouds and lightning storms.  All boats got away clean, the wind was not steady and was still patchy as the clouds sucked in the wind. Around the top mark up goes kites, at the bottom mark down come kites and there is the race committee boat, go home kids the storm is on its way.

In true 12’ skiff form everyone on the way home sail past the channel and put the kites up for one last ride home. Best ride of the day.  At least the wind finally hit 20knots…

Some photos from Terry and Angus.

Laurie’s crew landed on his leg, while leaning on the vang cleat… 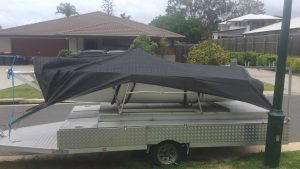