Well we’d been warned about a frothing 4th rig all week and come Saturday the excitement had built to uncontrollable levels..!!

The Southerly had hit, we could feel the cool change (it’s been a thousand degrees in Brisbane for weeks now) and we knew the breeze would be on.. We rocked on down to the club for the Jean Reid Memorial and it was a little bit eerie.. There were clouds, it was chilly (25 degrees), and there wasn’t a lot of puff.. It was probably only 12-15kts at lunchtime.. The readings around the traps showed that the breeze was on but it didn’t seem like it from the beach.. When it came it came in waves.. The breeze would fill in for 20mins and then die off a bit.. We all decided to throw in 4th anyway and I’m kinda glad we did..!!

The start was very ordinary with some confusion as to when we were actually starting.. However the flags went down (possibly a minute early) and we were off..!! Allwood were the only ones on time and they shot off.. It was very different to last weekend with a full tide.. It was nice and flat.. The breeze was in the low 20’s and all the skiffs were charging.. Ghetto tacked off first leaving The Wingman to hunt down Allwood.. Squid were a bit further behind as was CST (now called Skiff Ropes?) and Pennyliss.. Half way up the beat the wind was shifting and there were huge holes.. One particular hole tea bagged Allwood and they were swimming with the fishes. The Wingman tacked off as they could see Ghetto absolutely spanking the fleet out on the right hand side.. When we crossed at the top mark, Ghetto had a handy lead and was looking comfortable with their little gear up as usual. They set their kite and rocketed downhill like only a twelve in 20kts can.. We set our no.3 kite and took off after them.. We were clawing our way back slowly but surely.. We both got through the gybe and shot off for the bottom mark.. A hot little gust came through and towed us way below the mark.. The additional speed and direction change proved too much for Ghetto and they had a little spill.. The Wingman took over the lead and two sailed back over to the mark.. We had a slender lead up the next beat as Ghetto had their foot planted on that accelerator.. Ghetto tacked off to find some more breeze to the East, but we hung in on the flat right hand side.. About halfway up, the breeze kicked hard.. It was now gusting high 20s and we were in survival mode.. Pennyliss were showing us they had supreme confidence, driving it like they stole it in the same killer puff that had 4th mains flogging on the boats going uphill. Through the corner gybe, they drop down a wave, the kite dipped into the next and it ripped the bowpole off the boat!!! Disappointed, the guys retrieved all the bits and continued around the course. We tacked on the lay and made our up to the top.. Ghetto hadn’t made any ground on us and they had a tack to come.. Phew! Getting closer to the top mark and a bullet almost flattened us.. No main, dumped jib and still on our ear.. John turned to me and asked if we were going the kite.. I laughed and said of course.. It’ll be safer than no kite..!! We rounded the top and up went the purple monster.. She made a loud crack as she filled and we felt the G’s as we took off towards the bottom mark.. 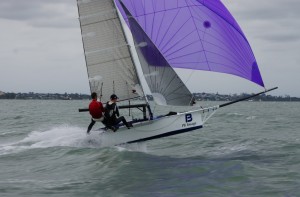 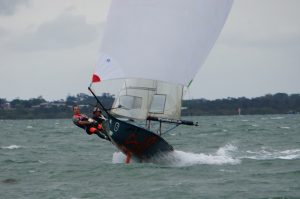 Ghetto rounded next and gybed early to try and make use of the flat water.. Well this was the ride of the day.. The rescue boat was trying to take pictures but struggled to keep up.. On board there was little chat just cuddles.. We had her absolutely flying and were holding on by our toenails.. We smashed the gybe and headed back across the bay to the bottom mark.. Ghetto had gone in to softer pressure Unrucky..!! The Wingman now had a commanding lead. The pressure eased up a bit up the next work as we navigated out way through the holes and shifts.. By holes I mean great big whoppers of things.. The wind would drop back to 15kts for about 5 seconds before hitting you at 25..!! It was hard work..!! We rounded the top again safely and sent her back down the bottom.. This ride seemed very casual compared to the last one.. Even though it was still in well over 20kts of breeze.. We hit the corner a little too casually and went swimming.. The race was on! We could see Ghetto steaming down towards us with that big paw printed kite.. We pulled in the kite and got her up as quickly as possible.. They still hadn’t caught us.. Yeeha!! Up went the kite again and with the now familiar crack! We were back in the game..!! We rounded just in front of them at the bottom for the final lap and after the 4 lap marathon race there was absolutely nothing in it between the leaders.. The Wingman kept a close eye on Ghetto and covered their every move.. We both tacked at the same time to try and make the lay.. Ghetto were grasping at straws but they had to try something.. We both made it around the top but Ghetto must have had to really pinch hard make it.. We set the kites for the last time and the pressure was on.. The Wingman took off in mediocre breeze and Ghetto had a puff.. They had us firmly in their sights and we gybed pretty close together.. The puff finally caught up to us after the gybe and towed us well below the finish line..!! I thought with their little 4th kite Ghetto had us.. But we held tight and dropped right where we had to.. Ghetto eventually had to drop too and we both two sailed across the finish line..

Epic day on the water and awesome racing in those conditions..!! I’ve said it a million times, but there is nothing like a 12ft skiff 4th rig kite ride.. It’s been 2 days and I’m still riding that high.!!

Squid were next across the line.. They had broken their tiller so great effort finishing.. The new guys on Skiff Ropes showed plenty of promise too getting around the track.. Not bad for it being the second time in the boat.. Joel and Brendan pulled out after the second lap.. They were having too much fun on the kite ride and just kept on going right down past the Wynnum banks..!!

I haven’t checked next week’s forecast but I’m already amped for it..!! Until then, SEND IT, DON’T BEND IT..!!

Videos from the QLD 12ft Skiffs