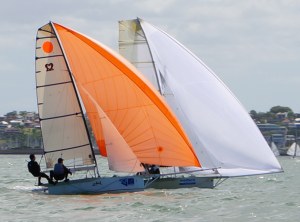 Another glamour day on Waterloo Bay and with the perpetual handicap bandits, Tank Girl and The Wingman absent, the race for most handicapped was on. 5 boats hit the water in the 10-15kt Easterly and the first sprint was a match race between Ghetto and Allwood. With Ghetto coming out on top by a small margin. By the 2nd sprint, all 5 boats were there and the start line was a little hectic. The shifty easterly took most by surprise with starboard tackers just getting around the pin. Allwood headed right and was leading midway up the beat… but a couple of extra tacks saw both Ghetto and Squid round just behind them. Allwood launched the big kite cleanly for the first time in recent memory and took off for an easy win. Ghetto had halyard-around-spreader-prawn-capsize issues, letting Squid through for an easy and distant 2nd. Newcomers Brad Madders and Bronson Light on the newly painted and renamed “Cougar” finished their first race with the kite up and the sheets around the luff. A few interesting round ups with both crew hanging off the trap rings ended with a splash and 5 minute retie. The Pennyliss boys called their race an “E” for effort, finishing but not convincingly.

The last race is the one that counts, and everyone got off the line together, EXCEPT GHETTO WHO PICKED THE PIN END ON PORT and got a 50m jump on the fleet. Allwood and Ghetto had a drag race up Lota creek with Ghetto maintaining the gap despite the bigger rig on Allwood. Squid broke away with fresher breeze up the left, and came back into it towards the top, slotting into 2nd before being overtaken shortly before the top mark. Ghetto held them off during a nerve-wrecking run with 2 big rig kites running fast and deep. They managed to maintain a slight lead at the bottom mark, when Allwood heard the bell at the club bar and headed in for a shower and beer. This left Squid to try to come back from a long way back and with the building afternoon breeze, Ghetto continued to power away for a convincing win. The handicap (and trophy) went to the sticky Squid.

The final run to the finish held the best rides and everyone sent it down the leads for a 12ft skiff show to those watching on Darling Point.

Another glamour day in Brisbane and with 2 more boats next weekend, the club championships will be a monumental showdown. A big shout out to Joel Aynscough for stepping up and buying CST Composites from Sydney on the weekend. Another great boat in Brisbane and plenty more fun than that little cherub. 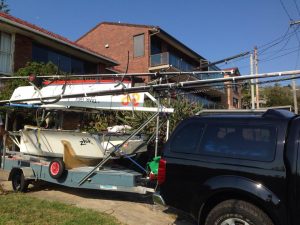