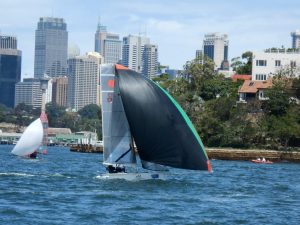 Tough weekend on the water, but a good experience and plenty of fun was had by all.

Saturdays race was described by local narcoleptic cherub sailor Ali as the worst day on the water in her career. It was an unsteady 2nd rig Southerly and the short windward-leeward (with starboard roundings of course) course had a 50m hole at the top mark and the bottom mark. Lucky there was no shackle keys on board, or both teams would have probably gouged their own eyes out. The start was OK and both the Ghetto and Tankers were crossing tacks with the front runners most of the way up the first beat. Adrienne Calahan was leading the charge with Cam on the CST. After 5x 150 degree tacks in the last 10 boat lengths, Tankers and Ghetto got around in the pack and set off to the bottom. Ghetto was hit by a gust when hooking up and then the “anti-gust” swallowed them up with a nasty teabag capsize. Ghetto didn’t see much else of the racing apart from when the leaders passed us on their way to the finish. The cherub that beat Tankers from the bottom mark to the top mark took the win on a day that would have been better spent on a laser… or at a stripclub. 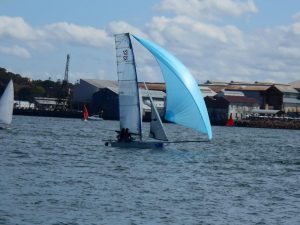 Saturday was shaping up to be a nice 2nd rig Easterly, but the early 15-20kts on the harbour softened just before race start and it was a tragic 0-12kts from then on. Tankers and Ghetto the only 2nd riggers, and did well to stick with the yocals with the big rigs. Once again some good starting and first works saw the QLD contingent fighting hard and looking the goods. As soon as the kites went up, the hard work of tacking and ghosting was lost. Staying in the best pressure was the only way to keep up, so extra tacks and gybes were completed. I estimate we did 200 tacks on the day. Disappointing result in the first race with Wolfie, Dodge and Barnyard beating both of us. However, Ghetto exacted revenge in the last race, pulling off a 7th with all 3 frenemies behind us.

Good to get some practice, but the best ride of the weekend was on the way back to the beach after racing. A 15kt “finger of god” gust came along and followed the sled along the run to the club. Quick derig was abandoned to make the most of the flat water speed ride.!! When discussing the ride with Jono Temple later he stated, “those rides are the only good thing about sailing here”. 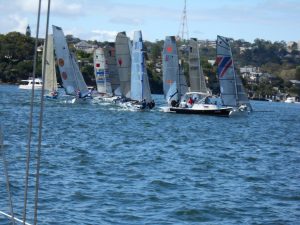 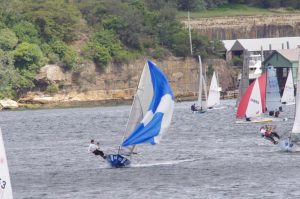 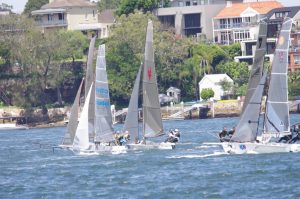