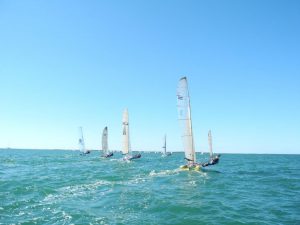 It was a cracker of a start to the season though..!! I’m not going to lie, my body was not prepared for it.. I was in all sorts yesterday.. I’d hate to have been a crew..

The forecast had changed from 20kts to a delightful 10-15kts.. It was going to be amazing..!! We got to the boat park and the water was like glass.. Our hearts sank as we all remembered last year’s big rig fest.. Surely not again.. We all plugged in the biggest gear we had.. Have I mentioned we had 6 boats..?? No..?? Oh well.. We had 6 skiffs on the lawn..!!

The breeze came in to a painful 5kts from the East and we hit the water.. On the way out to the start the breeze shifted a bit to the South and came in just enough to two string.. PERFECT..!!!!

We waited until all the skiffs go to the start line and before we knew it, we were in to the sequence.. It felt good to be back on the water, even if the wind was light and there were a million lasers bobbing around our course.. Somehow Trisso and I lost our starting watch over the winter months and that sure made for an interesting start.. I was counting down in my head and watched as all 6 of us hit the line together for the first time of the season..!! What a rush..!! Oh how I’d missed the feeling of roar power from our big rig, and the acceleration of our skinny Mathews hull.. Game on ladies..!! The champs were back in business..!!!

The Flying Animals won the start so a big congrats to Spaghetti Sal and young B-Mad.. Unfortunately they suffered for speed off the line as they only had a second rig… The mighty PB surged past in a speedy low groove. Ghetto and Squid were to windward and opened a can or whoop ass on the poor under powered Flying Animals… The quiet achiever Terry Ellis was up there too.. PB had gone low and was first to tack… Unfortunately our boat handling was not quite as slick as it used to be and after a slow tack we had to duck the first 3 boats. Around the top it was Ghetto, Squid, PB and Old Yella. Followed closely by Pennyliss and the Flying Animals.

The wind had swung South and it was to be a very tight reach to the gate.. Ghetto and Squid took an age to set their kites and PB did the old set, gybe, send..!! We were first to the gate by a mile.. We still had to drop the kite to sneak through the tight gate but once it was up again we took off and showed a clean pair of heels.. Old Yellow was next through the gate.. Huge congrats to the boys as they were the only ones to make it through the gate with the kite up.. Terry had the old girl on her ear and smoking..!! He rolled Squid at the gate and kept sending her hard to the bottom mark.. After being humiliated in front of the start boat Squid put up their kite and chased Terry and Wayno down.. They managed to catch and roll the old boys at the bottom mark.. Nice work lads..!! Gotta love the close QLD 12’s racing..!!

The course had changed a bit with the southerly kicking in so it was a relatively short port tack before the fleet flopped over to Starboard and laid the top mark.. Speed was the key and PB sure had plenty of it..!! We made it to the top mark and did a sneaky gybe and two sail reach around it… Once we could lay the gate we set the kite and drove her hard.. Squid were next around followed by Old Yella… We finished in that order with Pennyliss passing Ghetto to get the 4th and The Flying Animals brought up the rear.

What an excellent way to start the season… All boats looked somewhat rusty and big rig is certainly not the most forgiving of rigs….

One minute after the last boat crossed the line we were in to a sequence.. We didn’t change the course because the breeze had died out and was again out of the East.. The start was even tighter with Squid and PB getting quite close and personal pre-start.. BRING IT.!! Squid won the battle but PB was lightening out of the blocks. Squid had high mode cranking as the wind moved South and came in to a mighty 15kts… Unfortunately for Squid the wind change meant we all made the top mark on the one tack! It was a quick gybe at the top mark and a top end big rig two sail reach through the gate and to the bottom mark.. It was a wild welcome to the new season..!!! Our big sails caused many of us to hit the piss.. PB was first to the bottom mark by a fair way.. Squid was next.. PB sailed off course and allowed Squid to sneak up the inside and make up some time.. PB went around the top mark again leading the fleet.. We gybed and started sending it towards the gate.. Tristan took a half step forward and whoompa.. Bow down aft up, PB was wet wet wet.. Squidgee had a narrow miss with their rounding but made it through and passed PB.. It was a quick capsize for PB and we were back on the heels of Squid by the bottom mark.. This time we tried to do the sneaky inside line and tacked first.. Benny covered us and it was fat boat vs skinny boat for the drag to the top mark.. We pulled some meters in to them but it wasn’t enough as we couldn’t quite lay the top mark… We had to tack and duck them.. DAMN..!! Squid went around the top mark in 1st.. followed closely by PB.. Unfortunately our square top decided it was not up for the bear away and we mined her hard… I was quick to get on the board and when I looked up I saw Squid also on her side.. I yelled at Tristan to stop flirting with the dugongs and help get PB back up because Squid were in the piss… The race to get back up and to the finish line was on.. PB was up in a flash, and thanks to her modern self-draining cockpit, we were flying towards the finish line well before Benny and Craig were able to pull the plug out of their bath tub..

The ride home was amazing too.. There were many ramps, and our big kites sent us flying..!! 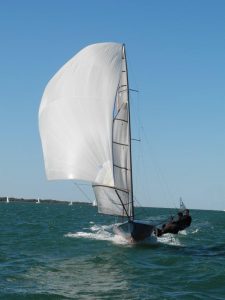 It was an awesome way to start the season.. 6 starters, 6 finishers.. Thrills and spills.. What more could anybody ask for..!!!

Unfortunately the ride home took a few casualties with both Squid and Old Yella entering the mine.. Benny didn’t leave the boat until she was completely vertical.. (a core sample was taken with the bow pole)

Terry has a few modifications to make on his bow as he sent it and bent it..!!

To our new Queenslanders, welcome..!! Elliott – 12’s rule, and you may not know it yet, but your life has changed forever.. There is no going back.. The rides just get bigger and better.. Wait until you get a black 4th rig kite ride.. It’s just the beginning.. Will – Welcome to QLD mate.. You won’t miss the Cove.. The rides are always BETTER ON THE BAY..!!

See you all next weekend..!!