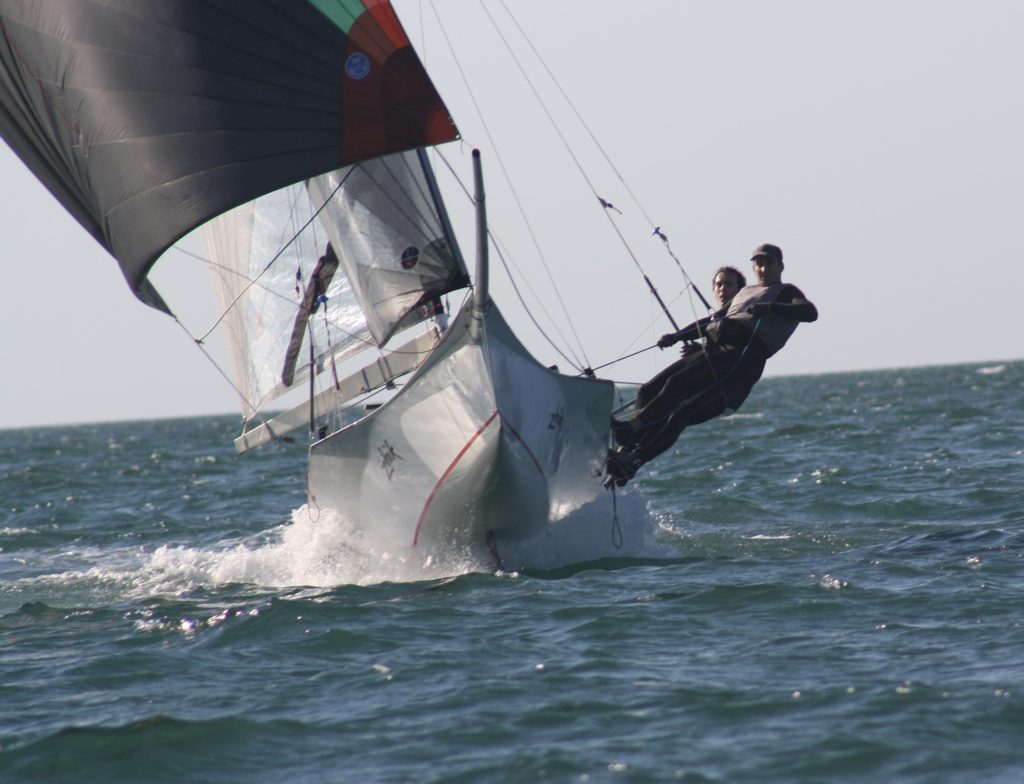 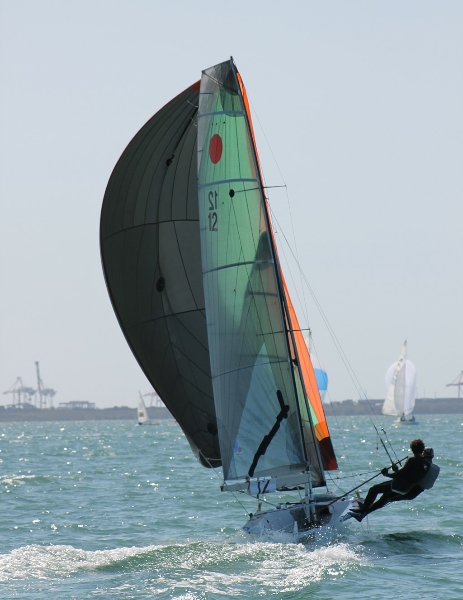 Ghetto Sled at home on the speedway..!!

With the Americas Cup being the hot topic at the moment, it was kind of exciting knowing that the numbers would be down on the weekend.. We knew there would only be the two 12’s on the race course and the match race smack talk started early.. The hype around the race was epic with both skippers still blurting verbal diarrhoea at one another as late as on the drive down to the club.. It was a last ditch attempt to get in to each other’s head.. It was a trophy race after all.. The coveted Patrons trophy was on offer, and neither skiff wanted the other crew to hold it high on presso night.. On board The Mighty Wingman (yep, that’s right.. She’s back..) we knew we had an advantage with Ghetto Sled being the scratch boat and the Patrons trophy being awarded to the handicap winner..

The breeze was light to moderate and sat on around 12kts.. Did somebody say delightful 2nd rig..?? Both boats tried to rig on top of each other still trying to gain the psychological advantage.. Nothing could split these two teams..

We both hit the water and sailed out together.. Both skiffs had a bit of time up their sleeves and wanted to refine a few boat handling manoeuvres so did a quick hot lap around the top mark..

We got in to the start sequence with the course set parallel to Green Island.. Then it happened, the wind swung East..!! It became apparent that port tack was the only option.. Both skiffs started at the pin end on port and hit the line with pace.. Unfortunately for The Wingman some “Jack”ass on an 18 with a main sail as big as a 35ft yacht sailed up on us and started soiling our breeze.. With nowhere to go (we were pretty much laying the top mark) we had to suck it and see.. The boys and Ghetto seemed to have the jump on us early, but the Wingman team were not about to throw in the towel that’s for sure.!! We rounded the mark about 20secs behind.. We were still in the hunt..!! Up went the kite and we got ready for the tight reach down to the gate.. Unfortunately Hughie had other ideas and we lost pressure.. We watched Ghetto and the 18’s sail on down to the start boat gate and do two quick gybes and smoke down towards the bottom mark.. We had nothing.. We were pointing 30 degrees higher and going slower.. We gybed down to the gate and and as we got there the pressure came back.. Perfect if you wanted to run low, but now we had to try and climb up to the bottom mark..!! We dropped the kite and two sailed up to the bottom.. Meanwhile Ghetto had a commanding lead and was already heading uphill..!! We kept our heads and just started sailing fun mode.. Our two sail gybe around the bottom mark was spot on and we had a pretty good line back up to the top mark.. Ghetto held their lead and around the top they were still playing with the 18’s..!! The Wingman was half a leg behind and heads were starting to drop.. Not even B-Mad’s handicap could help us from here..!! 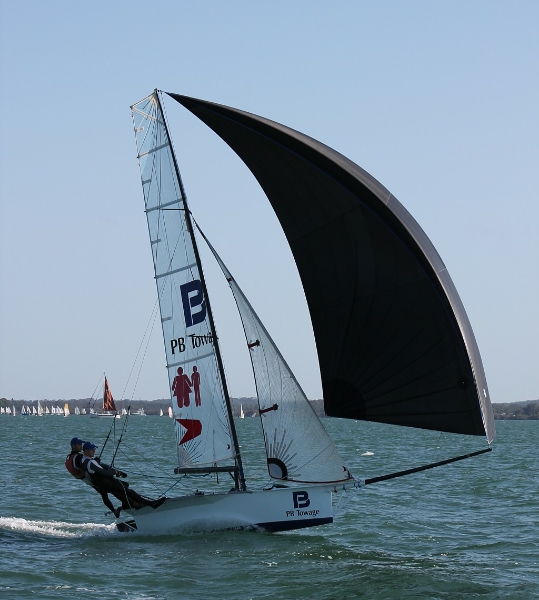 We rounded the top mark and squeezed high to lay the gate.. Ghetto had rounded the bottom mark already and probably had a 2-3min lead..!! The Wingman was getting whooped..!! We rounded the bottom mark for the final time and looked up the course at Ghetto.. They were headed for Lota creek.. What the..?? We were laying the top mark and gaining.. What breeze were Ghetto in..?? And WHY..?? Were they heading home..?? John jokingly said to me.. Look at their angle.. Spiesy would say “we’re still in it here..!!” The boys on Ghetto tacked and headed back towards the race track.. John was right.. We were back in the game..!! Who would have thought..!! We rounded under a minute behind them and it was a battle as to who could sail higher and lay the finish line..!! Ghetto had a bit on and got smacked below the lay.. They had to drop the kite and two sail.. Here we go.!! The Wingman was coming home strong..!! Benny on the bow of Ghetto did a great job on the pressure leeward drop and Ghetto were able to sneak home for line honours.. The race against the clock started.. The Wingman squeezed and squeezed and got through the finish line with the kite.. Was it enough to get home for the handicap win..?? We didn’t know at the time, and we still don’t know now.. Well done to the Ghetto boys for the bullet and feel free to sail to Lota anytime you want.

Race two was going to be fun, with such a close finish to race one, it was still anyone’s game..!!

The course wasn’t changed which surprised a few of us so again it was a port hand start to see who could lay the top mark best.. With the 18’s again causing a few issues (This time it was some crazy skinny dude with what looks like dacron sails..!!) The Wingman had to low groove it and they had Ghetto flying high to avoid the nasty air.. Who had the best VMG..?? Ghetto, and they rounded the top mark ahead.. It was close but not close enough.. Ghetto two sailed up a bit higher so they could lay the gate.. We cut the corner to try and make a gain but alas we just went a bit higher and slower and by the gate the gap hadn’t really changed.. Around the bottom mark and Ghetto were leading, The Wingman came in on starboard and with some pretty half-hearted Hollywood inspired screams, we made them avoid us and followed them around the mark without really putting any pressure on them.. Ghetto were killing the high groove and going fast.. It was great to see the boys finding their straight line form from last year.. Changing gears seamlessly they extended on the one tack beat.. With no passing lanes or Ghetto showing any weakness The Wingman were left to watch and wait for Ghetto’s signature choke on the final top mark tack.. Luckily for Ghetto they made it through the boat and even though it wasn’t pretty, it was pretty effective and the rounded the top in first place.. We followed them around but knew unless they broke something we had nothing to throw at them..

All in all it was a cracking day out there, with magic sailing conditions with the QLD sun shining and 31 degree temps.. You wouldn’t give it up for anything..!!

Already I’ve started going over the boat for some midweek tweaking.. Bring it on next week boys..!! The Wingman is back and ready to give this season a little tickle.!!