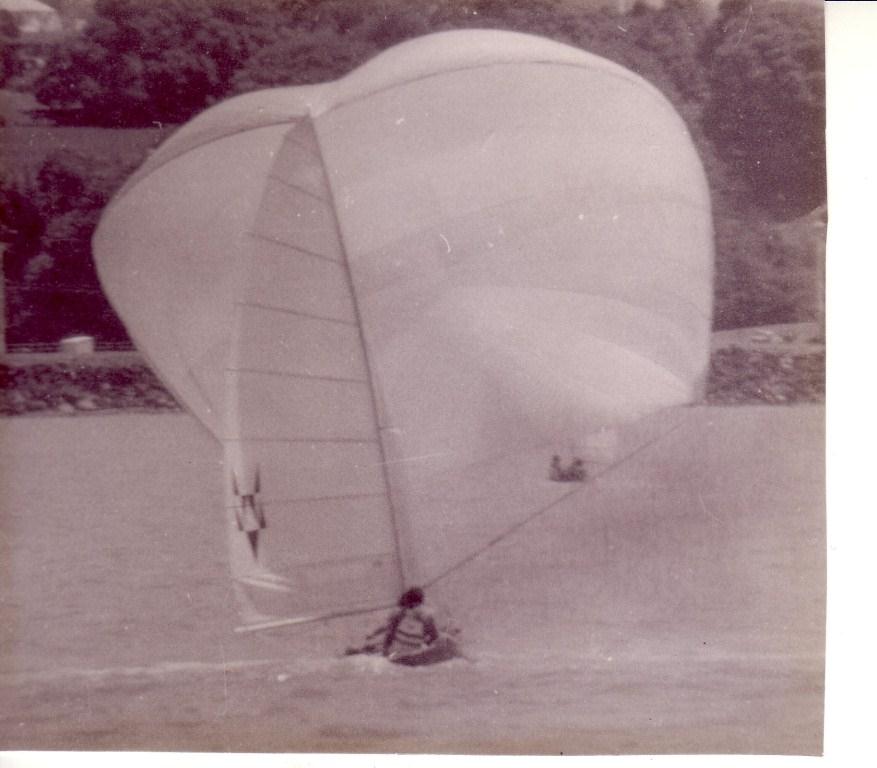 Is there anything more Ghetto than bullets..??

With the breeze being over 10kts, we didn’t really expect to see many 18’s on the lawn and by 12pm there was only the one.. Didn’t see much of them on the course either..

We stood around and discussed rig choices.. 2nd.. 3rd.. 2nd.. With the last few weeks sitting on the side, I was quite reluctant to go 3rd.. However Wayno made the call and the “I go, you go, we all go a go go” rule was applied.. It was 3rd rig..

PB was first to hit the water.. Tristan was off tugging that day, so Craig and I wanted to get a few tacks and gybes under our belt before the race started.. We headed out the leads and discovered quickly that the outgoing tide was really motoring and there were some sweet, sweet ramps for the downwind..!! Woot woot..!! We trucked out to the flatter water inside Green Island (not the one off Cairns) and did some tacking drills.. It was Craig’s first sail on PB and taking the main through a tack was quite foreign to him.. Our tacks were slow but we were getting through.. Each tack better than the last.. The breeze was a steady 18-20kts and before we knew it we were at the tip of Green discussing how to pull up the kite.. We let off the vang and cunno and went for broke.. Sniffy, sniffy, sniffy but safe.. Phew..!! Craig pulled up the new kite and PB took off..!!! The waves were big but our grins were bigger..!!! We sent her hard and she flew like the rocket ship she is.. I had to tell Craig to stop touching me inappropriately, and not to push me back any further.. We gybed and continued the send to the start boat.. Welcome to skinny boat sailing Craig..!! We were chuffed..!! What a sensational ride..!! The race hadn’t even started and our day had been made..!!

The other skiffs joined us out there and the breeze eased back slightly to a lovely 16-18 with 20kt puffs.. Perfect..!!

The start was a bit rough but we all seemed to be there together on the line.. Ghetto had the upper hand at this stage.. It was a nice drag race though.. Squid tacked off first.. Then PB.. The race to flatter water was on.. Ghetto and Pennyliss tacked soon after.. PB picked up Squid and looked to have the rest of the fleet covered.. The grins remained..

We tacked on the lay with Squid.. Ghetto tacked well inside us and with the tide running out so fast, timed it to perfection.. Both Squid and PB had to ease sheets to get back down to the mark.. Nice work Richo and Benny.. Sneaky sneaky..!! Ghetto went around first followed by PB.. Squid and Pennyliss followed (Pennyliss went for a last minute main sail change down to 4th before hitting the water.. Bandits..!!) With the kites up we sent it hard.. Well both fat boats did.. It pains me to say it, but both skinny boats were soft and single stringed it.. We followed each other to the gybe and then on to the bottom.. I don’t believe the order changed but we all had a sensational ride..!!

Around the bottom and it was Ghetto, PB, Pennyliss and Squid.. Game on..!! We all headed to the safety of Green Island.. The flat water was as valuable as a can of rum on the Barney Army.. We hit the corner and flew up to the top mark.. Awesome.

Ghetto rounded first closely followed by PB.. There was a little gap now to Pennyliss and Squid but the battle was still on..!! Ghetto gybed early to use the flat water.. PB went balls and all two stringing it through the chop.. We were rarely in the water, only gripping to the boat with our toe nails.. It was awesome..!!! We hit the gybe and knew we were a chance of knocking them off.. Craig and I jumped back out on the wire and prayed for the puff that would secure victory for us.. Unfortunately it was right there, but couldn’t catch up to us..!! We ended up in a “soft patch” and not even on the finish line lay anymore..!! The Ghetto Sled slipped past on Starboard on what looked to be a screamer..!! PB then got caught up in the RQ egg shells start, and had to thread the needle and gybe a couple of times to finish.. What a great race..!! So close and so fast..!!! Pennyliss were next across and Squid looked to be having a cracker of a ride..!!!

The second race was much like the first, except there was a mix up somewhere and Pennyliss started with the starters 20secs before us.. I never found out why.. I hope my start watch is working.. Ghetto, PB and Squid started together and PB tacked off first to get to the flat water.. Ghetto tacked too and we all headed to Green.. On board PB we broke the main sheet strop and around the top it was Ghetto followed by PB, Pennyliss and Squid.. Ghetto gybed, popped their kite and shot off.. PB two sailed while fixing the mainsheet, Pennyliss had some sort of kite issues as did Squid.. This was looking like being a Ghetto massacre..!!

PB finally got the kite up and with no hesitation we chose the lumpy two string send option..!! Yeeha..!!! We had a screaming ride to the bottom mark and had caught a fair bit back on Ghetto.. BIG GRINS..!!

Squid snapped a SS bolt which held their side stay, and almost lost their rig.. They limped home.. Shame Terry, the ride down the leads would have been amazeballs..!!

PB chased Ghetto to the flat water but splash tacked.. Pennyliss were hot on our heels and slipped past .. Bitches..!! We got it up quicker than Buddha on a road trip and were side by side with them in no time.. The Mathews MK1 vs Mathews Mk2 drag race was on..!! Lucky for us, the wind against tide accentuated the qualities of the skinny MK2 and we blew them out of the water..!! Woo woo..!! I’m sure the fact they also had a 4th rig main in had no impact on the result… We set the kites and sent it all the way home.. Craig and I had a good ride until some dumb ass fishermen freaked out and stopped right in front of us.. We were stomping down at full pace and they just stopped to let us pass.. We couldn’t go up, we couldn’t go down.. We just yelled at them until they moved out of the way.. It was close and somewhat exciting..!!

Once we crossed the finish line Craig and I did a glory ride through the Etchell fleet.. We got plenty of cheers from the lads as we leaped across their transoms.. We got to the gybe line of the leads but were having too much fun so just kept sending it down to King Island..!! We had a sporty two sail home keeping pace with the windsurfers..!! What a day..!!!

For those who missed it (Tristan included..) IT SUCKS TO BE YOU..!!

This weekend will be a bit different as we can’t race out of DPSS.. Keep posted as to where the races will be on Saturday..

Also the State Championships are coming up on the 15th..!! Get your good gear out and SEND IT DON’T BEND IT..!!