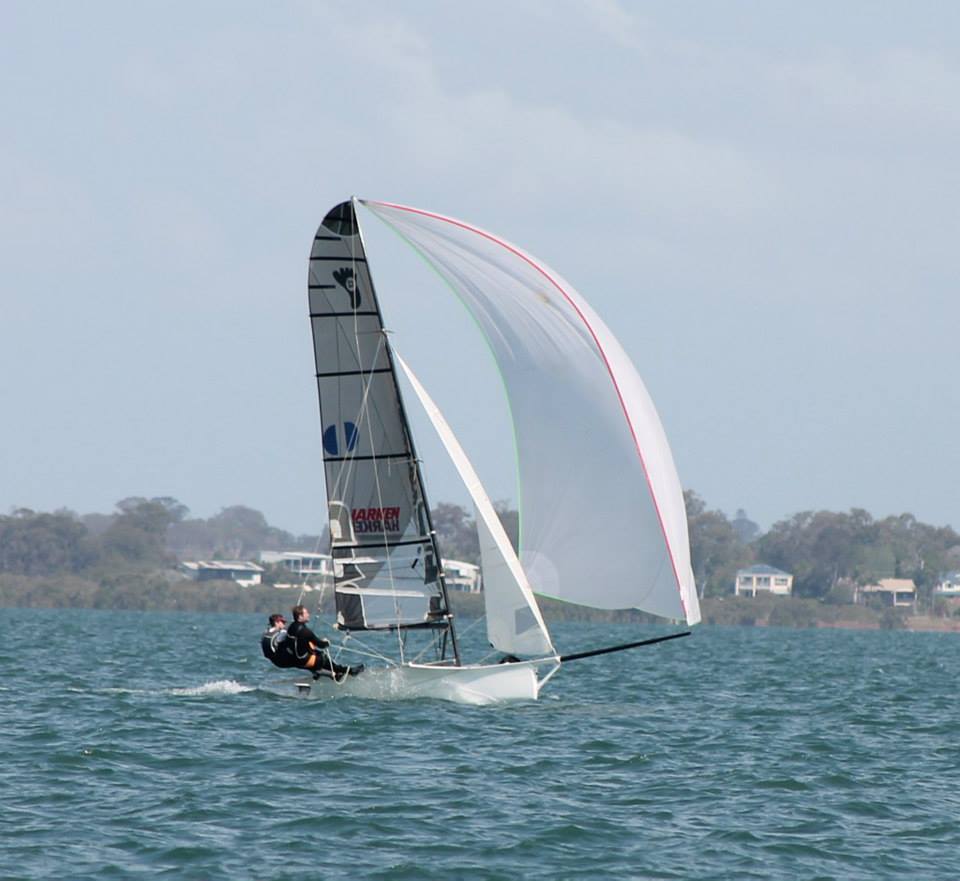 2nd rig at last in Brisbane.!!

Saturday the 29th saw a glamour 10-15kt southeasterly, threatening more, and 4 boats on the line. Numbers were low because Skinny broke his boom taking his mate for a ride in 25kts and Terry having shoulder issues. Broken bits everywhere from the 4th rig pounding we’ve been getting lately.

Race 1 started with Tankers, Ghetto, Havoc and Pennyliss matching up the first work. Tristan “the Ton” Hamilton was the guest gunner on the Tankers and after a bit of the first beat it looked like they should have gone BIG. But they were leading down the first run as Ghetto’s crew Ben decided to drop off his trapeze and Josh “overcooked” a gybe and swam for ages. Tankers had an unassailable lead. Except that Ghetto was firing and catching up fast, picking the shifts better and fully powered up. Despite having to drop and 2 sail to make the wing mark on run 2, Ghetto closed the gap. It was neck and neck coming up to the final top mark with Tankers just in front. Ghetto drove low and fast and clipped their stern when they gybed for the line. The wind had shifted and both skiffs had to gybe again to cross the line. Tankers went first and was heading for the closer pin… smart.. SMRT. Ghetto had to decide to dump on them and risk sucking high of the pin or cross in front and hope Tankers went too early. We waited and then a quick 25m drag to the line saw Tankers cross half a boat length in front.

Race 2 saw Tankers take the pin end on port and sail across the fleet… straight into a hole. Josh and replacement crew Laurie tacked early and fell into the same pit. Ghetto and Pennyliss went left and hit a line of pressure, tacking early and heading straight for the top mark. This paid and Ghetto had a 200m lead already over Pennyliss, more to the others and never looked back. Tankers struggled to maintain visual of Ghetto, except when we crossed on opposite legs. Havoc also didn’t light it up and was behind the Tank by some distance, with Pennyliss. The swell threading between Green and King Islands felt a bit like Sydney Harbour, and with all the powerboat traffic, it was a good practice race for those going to the Inters. Win to Ghetto by a solid margin. The puffy and shifty SE breese favoured those with luck.

The wind decided it had one last puff of life and the run home was the best of the day… leaping off power boat wash and sending it fast. Sucks to those who missed it.
Richard