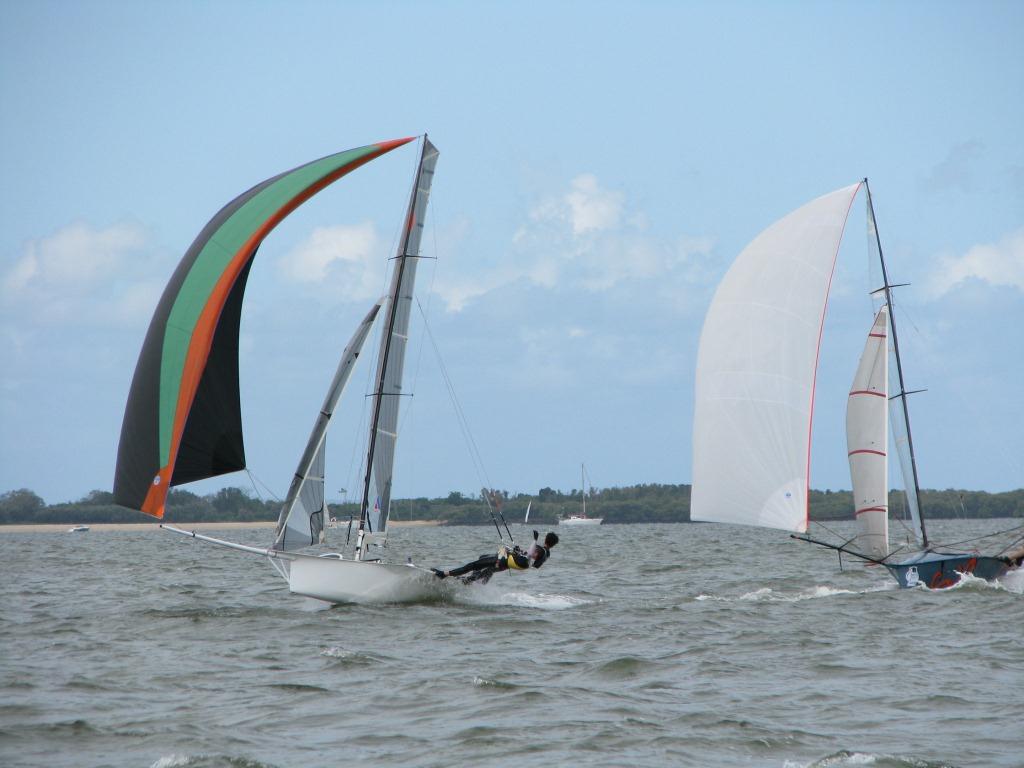 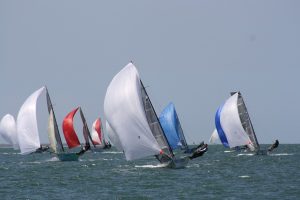 Skiffies in Brisbane awoke to a picture perfect QLD Summers morning.. The forecast was perfect, and the actual reading on the bay were a few knots stronger.. Crews were pretty excited and the morning text banter was fierce..!!

I will not admit to partaking in early wake up calls, as this may be seen as a form of sabotage.. I gave that game away a long time ago when a ratchet prank on poor Spaghetti Sal ended in a few tears and the loss of a fair bit of skin… I have one word.. Buddha. Sal got him back though.. He cut his finger open one day out racing, Andy and Sal advised him that pepper would help dry it up and stop the pain.. I don’t know how they sold that idea to him but the next thing I know is I’m derigging the boat alone because he was trying to rinse pepper out of his now extremely sore finger.. Clown.

So we got to the park and it was blowing a divine 15kts.. There were quite a few white caps about and the rig choices were split.. Well I went 3rd and everyone else went 2nd.. Words like soft, and flaccid were being used but without the ton on the boat I thought it would be safer to play the no swimming game with Elliott..

We hit the water with Terry and Richard launching first.. It was a very low tide and doing 167 tacks out of the channel definitely helped Elliott and I get a little coordination going.. Ha! Not really..

The start was ridiculous.. Ghetto hit the line with pace with PB following in their rubbish air.. Squid were behind us but in clear air.. The breeze was strong enough for our 3rd rig to have a bit of go and we hit low groove to get out of Ghetto’s dirty air.. We all tacked off to the right side of the course to make the most of the tide..

Ghetto rounded first with PB and the Squid close behind.. There was an altercation between Squid and PB resulting in the old boys on Squid swimming.. Basically what happened (there is video footage somewhere) was Squid were to windward and tried to roll PB.. During the hoist they were running square and bearing down on us and I called them up as their white kite was flapping above our heads.. I didn’t actually push them up, but the boys had to alter course and they capsized.. We managed to narrowly avoid their mast tip and continue downhill.. It must have been a very quick swim or the Squid boys were fired up for some Skinnyman revenge because they came flying down that run and rounded about 30 seconds behind us..!!

Ghetto had a handy lead at this stage but some interesting tactics saw them battling with less wind out to the left.. PB headed right and crossed them by a fair margin to round the top mark in 1st place..!! We scooted downhill for the final time but with their big black 2nd rig kite Ghetto easily slipped through on the inside line.. Nothing beats horsepower on a sausage course and PB were toast. Richard and Benny on Ghetto took the win with PB 2nd and a final charge from Squid third.. Great racing by all and it really was anyone’s game..

The second race started as badly as the first for us on PB with Squid this time winning the start and Ghetto trying for the port tack bandit option..!! PB were sucking squids dirty air for a few seconds until we once again hit low groove and shot out.. The breeze had come in a couple of knots and our 3rd rig was firing! We all once again tacked off to hit the right corner. Ghetto hit it first but PB had the inside line.. PB rounded the top in 1st place but again the smaller kite cost us.. We were 3rd by the bottom.!! Ghetto managed to sail straight past us opening up a great lead.. Squid passed us but were still within striking distance.. Ghetto played a few shifts up the middle and unlike their last race, they opened up a tremendous lead.. Squid and PB battled it out up the right hand side and with the breeze fading PB were found wanting.. The Squid boys seemed to toy with the PB rocket ship just staying that little bit ahead.. Letting us catch up before opening up the after burners again.. Somewhat frustrating might you say..!!

Around the top mark for the final time it was Ghetto, then open space.. Followed by Squid and PB.. Squid gybed early and for us on PB we decided to have a crack and send it out through the breakers (the tide had changed and it was getting a bit lumpy heading towards Green Island).. We had some good puff and decided to gybe in it.. We saw Terry and Wayno in a soft patch and I’m not going to lie, my heart started thumping louder than Benny’s bed head.. We were in with a chance here..!! Alas the breeze softened for us too and we were forced to climb up to try and fill our little purple 3rd rig kite.. Squid took off again and took the 2nd place.. With PB in 3rd..

All in all there was some great racing with battles on every leg.. It’s not long now until the launch of Benny’s new weapon.. She was post cured on the weekend with a splash of colour scheduled for the very near future.. Exciting times for the boys..!! I can’t wait to line up against them..!!

Until next week keep the big black stick pointed skywards and SEND IT, DON’T BEND IT..!! 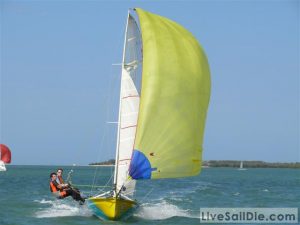