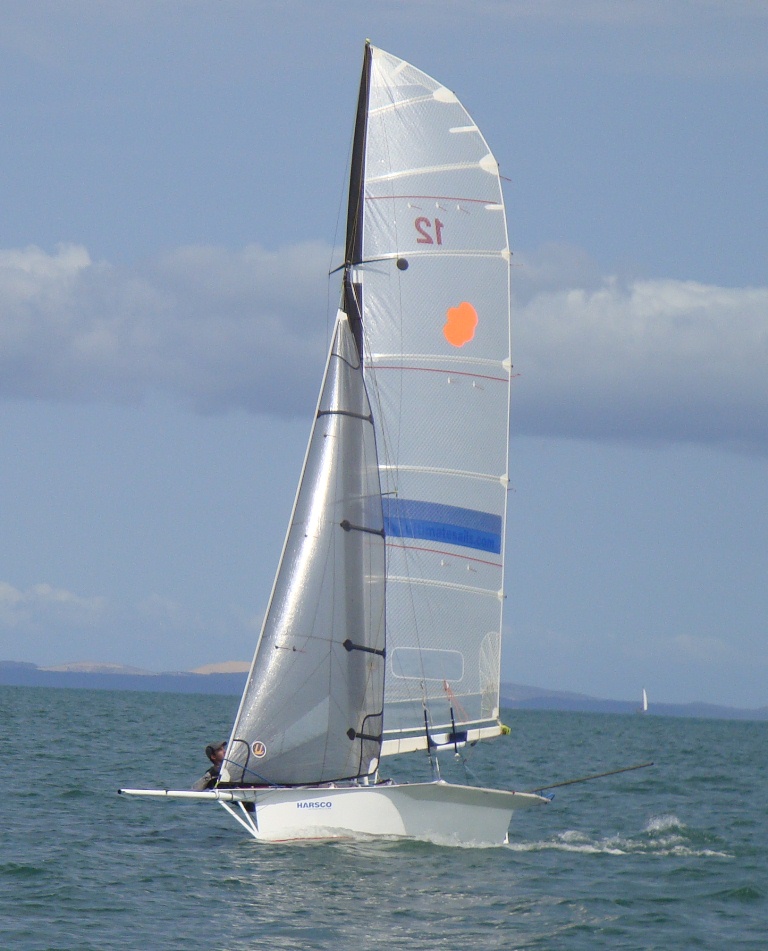 The rigging lawn was packed..!! Or so I’m told.. One thing is for sure though.. There was little debate about the rig selection..!! After the last few weeks of hiking like a laser loser, big rig was going in even if there were 4ft waves on the ramp..!! Well that was for everyone except Pennyliss, who obviously wanted to try out their bright new 2nd kite.. The breeze was lighter than Benny’s left nut after it’s standard 2 minute Saturday morning workout.. 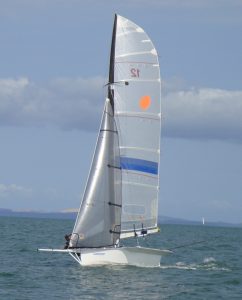 The first start had PB finally getting it right (yes we now have a starting watch..!!) and squeezing out Ghetto, with Terry in the Squid bugging out for clear air. PB went right towards some “breeze” and Ghetto picked the shifts up the left to round first.. They set the kite and zipped off to a comfortable lead by the bottom mark..

The next work was interesting with more holes than goals and made less sense than B-Mad after 2 cans of rum. Ghetto decided to back themselves and didn’t cover.. They got stuck in a few holes out to the left as PB played the island right hand shifts to perfection.. PB snuck into the lead at the top mark..!! It was very close.. Ghetto gybed out and caught a screamer that gave them a solid lead once again by the bottom.  No way they would make the same mistake this time, Ghetto covered PB to make sure of it. Only 17mins separated the 4 boats in the 1hr40min race.

The wind freshened between races to almost 10kts.. This was going to be a bit better..!! Out the front it sure heated up with a tight race all the way round. PB once again won the start but Ghetto had the legs to lead at the first mark.. Pennyliss had enough of sitting on the side, so went home early. Squid showed some good pace off the breeze and kept us looking over our shoulder all afternoon. With the shorter course, tacks and gybes were critical.. Ghetto put on a show by leading from the first work.. It was still very close though and on the downwind run to the gate PB looked to have busted through to the lead.. Ghetto had to pull off a mega gybe through the gate and in doing so tightened their grip on PB’s balls.. It was a case of safety first for the next lap with a tight cover being held on PB for the rest of the race.. PB threw everything at them, but there was no getting past the slick team onboard Ghetto Sled.. 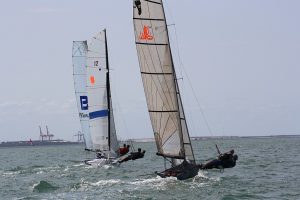 Squid came round the last windward mark in a puff of about 15kts and sent it hard all the way to the harbour. Ghetto and PB were cruising in when the extra breeze hit and it almost sent PB to the mine in flat water. There was spray everywhere and let me tell you, there were some words said onboard which can’t be published.. Ghetto watched the action, then gybed across looking for a ride. It was a case of power on just as a stink boat was coming out the leads and kicked up some interesting bow waves. Hold On..!! Was the call as they went straight over it at warp speed. A sweet jump and they were back on the flats. 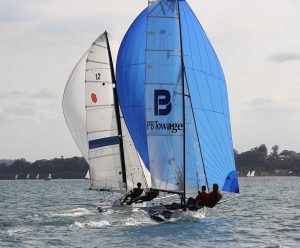 Overall a bad day to be behind and a glamour ride home..!! The close racing was invaluable to all crews in the lead up to the Interdominions.. The competition is really heating up and with a few more 12’s ready to rumble next week it’s going to be an all out QLD assault on the competition. For those who don’t follow our facebook page, congratulations are in order for Josh and Laurie, the proud new owners of the Mighty Flying Animals..!! She’s a noble steed.. 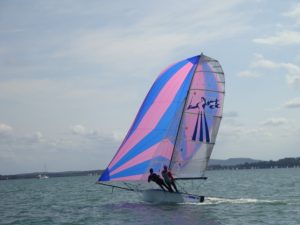