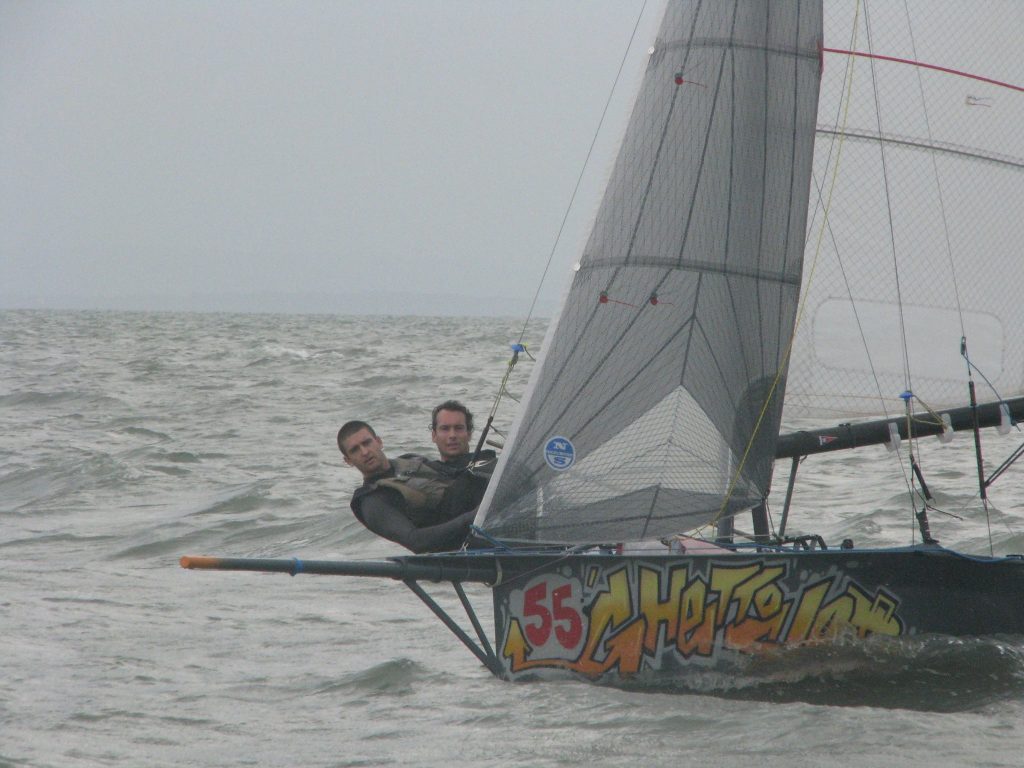 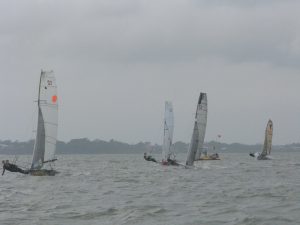 Forecast was 15-20, with ominous storm brewing in the west… There was much debate about rig choice, with only 10kts on the rigging lawn. 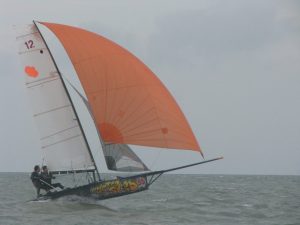 Pretty gusty on the way to the start line. Was thinking 4th would be the call if it built at all. But by the gun, it was more than manageable and Ghetto won the start and headed north, followed by The Wingman and Squid, joining us for the states. Tank Girl decided 4th rig was the call of the day and consequently missed the start by XX minutes. Ghetto round the top first with a little gap to Wingman. Last week, skinny had warp speed downhill and I knew we had to push hard to fend him off. The waves had calmed from last week’s 25kt NEer, with tide going the other way. So it was skinny, flat and fast, with a few deep troughs to keep us on our toes. Pretty epic rides as usual on Waterloo Bay in anything above 15knots. The Wingman closed in and rounded just behind Ghetto. Only 2 laps, as we were trying to fit 3 races for the day. Ghetto  covered The Wingman and powered upwind to extend their lead to 100m or so by the next top mark. There were periods of flogging mainsails followed by periods of block to block, which kept things interesting for the crews and vang operators alike.
The run to the finish was uneventful and Ghetto crossed first. The Wingman 2nd, Squid 3rd and Tankers 4th, wishing they’d had the balls to stick with 3rd rig. 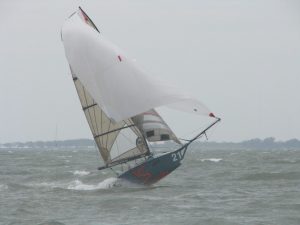 Race 2:
The wind eased and built repeatedly between races, so we weren’t sure what to do with the cunno. Everyone racked up but were tentative, Ghetto getting the best of the start, followed by Tankers and Wingman, both pushing each other along. Ghetto tacked and crossed, heading towards the Green Island layline. Some fresh puffs under the island made tacking difficult, so a quick throw caught Crossy half hooked up and over the side he went. The boat spun into irons as he held on, then tacked back, with crossy deciding to go underneath the hull. Dragged back on board, Ghetto got up to speed again, then tacked well overlaid. Still the chasers hadn’t caught us, but all 4 skiffs were sending it down the first run, with puffs and lulls driving us up and down. The layline moved (I hate it when it does that), so we were all overshot to blazes. Ghetto and Wingman got the closest and did some synchronized kite drops, before a 2 sail drag race to the bottom mark. Tankers, with the 4th gear, must have thought they could make it, but we saw them netting a few prawns near the bottom mark. Squid was behind, jumping waves and enjoying the competition. 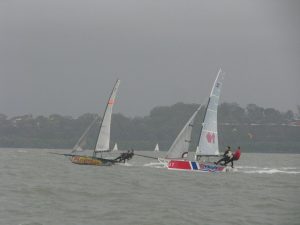 The Wingman led by 10m at the bottom mark and a few gestures were parlayed before Ghetto tacked off, hoping to start the duel. The wind was dying a slow storm-predicting death, and swinging a bit east. Ghetto had speed over the Wingman, but the wind shift allowed the wingas to hold the lead at the next cross. Tankers went east hard, hoping for a miracle, which looked on the cards as we bore away 30 degrees heading east. Unfortunately, with the breeze dying, Tankers didn’t have the horses to overtake, Ghetto drawing away from the Wingman by heading further east early. Barely 2 string by the top and final mark, a gybeset was on due to the wind shift. Ghetto had the best of the dying breeze to take the win, drifting across the line 1string. The Wingman also held onto 2nd, with Tankers having a slow speed capsize after then finish and Squid following close behind. 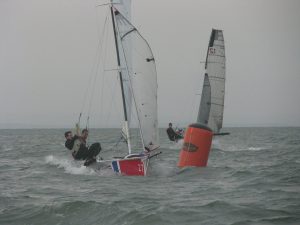 Kites stayed up as the black clouds were decending on Manly. Ghetto home in an easterly, Wingman in no breeze, Tank Girl and Squid having to tack into the westerly. All home and safe before the storm hit, some icy rain making de-rigging bareable after the 32 degree day. 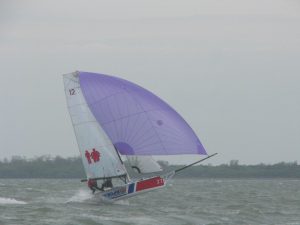 Next State titles races will be from Sandgate on the 3rd December.
Richard

4 years ago Centenary
See All Posts