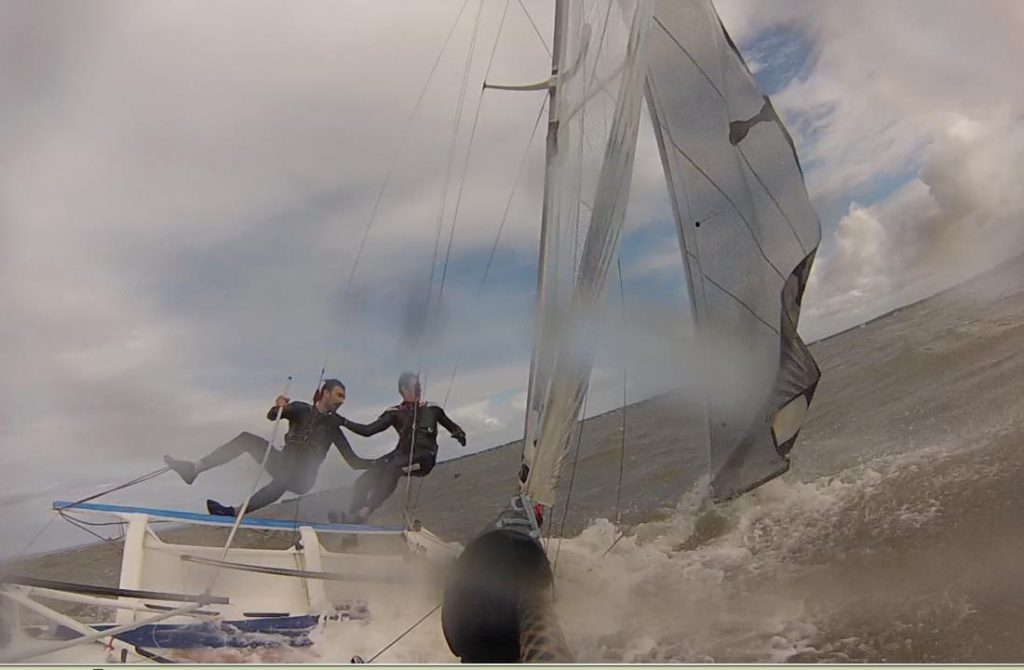 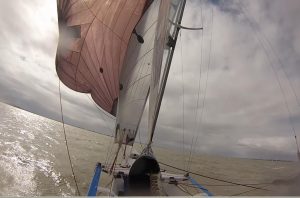 The wind was on and the skiff boys were pumped..!! Heats 3 and 4 of the QLD Championships were here and boy did the wind gods play the game..!!

The forecast was for 15-25kts and from the rigging lawn we could see the squalls coming.. Tank Girl started her engine putting in her second rig which is actually her big and third rig depending on the amount of wind out there..

For the rest of us the decision as to which rig to put in was not as easy, but when a squall came through flinging trailer lids against fences and blowing Tristan’s drying unmentionables around the park we threw in 3rd rig.. Well most of us did.. The old girl with the rookie skipper was put back on her trailer for safe keeping.. Meow..!!

So we hit the water and by now the breeze had eased a bit to a delightful 15kts.. The boys on Tank girl must have been stoked..!! However before we knew it the dark patches on the water got bigger and it was back to a solid 20kts.. Ideal for a delightful send down to the start line.. On board PB there were big smiles as Trisso hadn’t had a proper ride (on a 12) since the Inters..!! PB welcomed back the Ton with an incredible ride down to the start boat.. It was awesome..!! Sucks to be you B-Mad..!!

The fleet waited for the breeze to settle but Hughie had other plans.. He blew up and flattened the fleet..!! Ghetto Sled busted a tiller extension and PB did a pretty spectacular mine… Tank girl cut their losses and instead of trying to battle the breeze they just left her on her side and sat out the squall.. Once the seas had calmed down we got in to a sequence.. Squiddy nailed the start with Brendan on the mighty Allwood sails hot on their heels.. PB went for a conservative start and hit the line on Port ducking the fleet.. Benny and Craig on Tank Girl followed up the rear. Ghetto had gone in to get a replacement tiller extension and missed the start.. Unrucky..!!

The old boys on Squid showed a clean pair of heels and lead the whole way up the first beat with PB only just rounding with them at the top mark.. There were a few hot glances at one another but Terry gave me room and there was no need to raise my voice this time..

PB scooted downwind with Squid biting at our ankles.. Brendan and John were next with Tank girl having a few kite cleating issues..

We leaped through the gate at a hundred miles an hour and down to the bottom mark.. WooWoo.!!

The next work was a little lighter and we went left.. The Squid and Allwood hit the right corner but PB had their measure.. To be honest we only really went left so we could hang crap on the Tank Girl who were two sailing..

We rounded the top mark and sent it like we stole her..!! There was plenty of chop with the tide on its way in and the Southerly breeze pumping the way it was so we spent most of the time in the air.. Shame you packed the boat up B-Mad..

Ghetto was back out on the course now and came up to the top mark for the ride.. Squiddy was next with Allwood following with plenty on..

The gybe was next and I felt something weird going on with the tiller.. Tristan just thought I was a muppet, but I had difficulty holding a straight line when the breeze was on.. The next gybe was worse and we splashed.. Ghetto did the same thing right beside us.. It was only a quicky and before we knew it we had the little blue bag back up and were flying towards the bottom marks for the final time.. We rounded and headed back to the top and watched Squiddy coming down absolutely balls to the wall.. The breeze had kicked again and that little blue boat had some ridiculous pace.. Spray flying as high as the first set of spreaders..!! Benny and Craig had given up on the racing and when they rounded the top mark they hoisted the kite and tied her off.. They sent it down past St Helena..!! Epic ride boys..!!

PB got back up to the top and by now the breeze was insane.. We decided to nurse her down to the finish line and save ourselves for race two.. We took the gun with Squid in second..  Allwood pulled the pin and Tank Girl were somewhere near the Port of Brisbane..

The second race only had three starters as Tank Girl and Allwood called it quits.. (I have to mention Tank Girls power reach home.. That boat had some incredible pace..!!) Ghetto, PB and Squid lined up and were looking to take no prisoners.. It wasn’t long after Squid crossed the line that we were in to the sequence.. 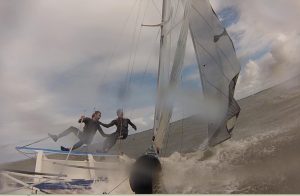 It was Ghetto this time getting the jump with Squiddy not far behind.. PB did the port duck start again and were ahead by the top mark.. There wasn’t much in it with Ghetto close behind.. Squidgee were also on song and the three skiffs motored towards the gybe line.. Ghetto gybed inside PB and rolled us like a dirty durry.. OUCH..!! We stayed in touch and rounded the bottom mark with our black pole inches from their transom.. We low grooved it and the breeze kicked a bit so we were able to shoot out under them and then climb back up on the other side.. SNAP..!!
The next run was tight with PB holding form through the gate and down to the bottom marks.. The breeze was on and we had to drop the kite to make the bottom.. We decided to take the Eastern mark to save us from doing a two sail gybe but upon closer inspection we discovered it was a long way off the track.. It was too late to reconsider and we rounded about the same time as Ghetto who took the close mark.. PB went out to seek tidal assistance and Ghetto went for the flatter water.. Hearts were in mouths as we waited for that cross.. It looked like Ghetto were going to just miss out this time so Richo tacked back.. Coming in to the lay and it looked like Ghetto were well over laid.. Yip yip..!! PB did a sneaky tack and was ahead again..!!! Unfortunately we were a few meters short of a comfy lay and we had to work our butts off to make the mark.. Ghetto Sled on the other hand cracked sheets and came screaming in to the mark to once again take the lead.. Ghetto rounded first with PB very close behind.. Kites up and away we went..!! Ghetto gybed first but PB held on for a few more seconds.. We wanted to come in HOT..!! The sprint to the line was on with Ghetto holding firm, that orange kite trying to pull Benny’s arms off.. Ghetto took the gun with PB a few seconds behind..
As often it happens the best ride of the day was after the finish.. It was a ball tearer.. Massive air and sooo much pace.. The waves got steeper indicating we were getting closer to the Wynnum mud flats so we ditched the kite and two sail power reached back in to the safety of the harbour..

What a day..!!! As I pulled the rudder off I realised we’d snapped our rudder pin and there was about 8mm of pin holding the bottom in.. We were very lucky our day didn’t end on the second lap of the first race…..

Next week we do it all again with the final two heats being sailed on Saturday..!!

Currently PB are leaders but with a drop Ghetto are on equal points.. GAME ON LADIES..!!!