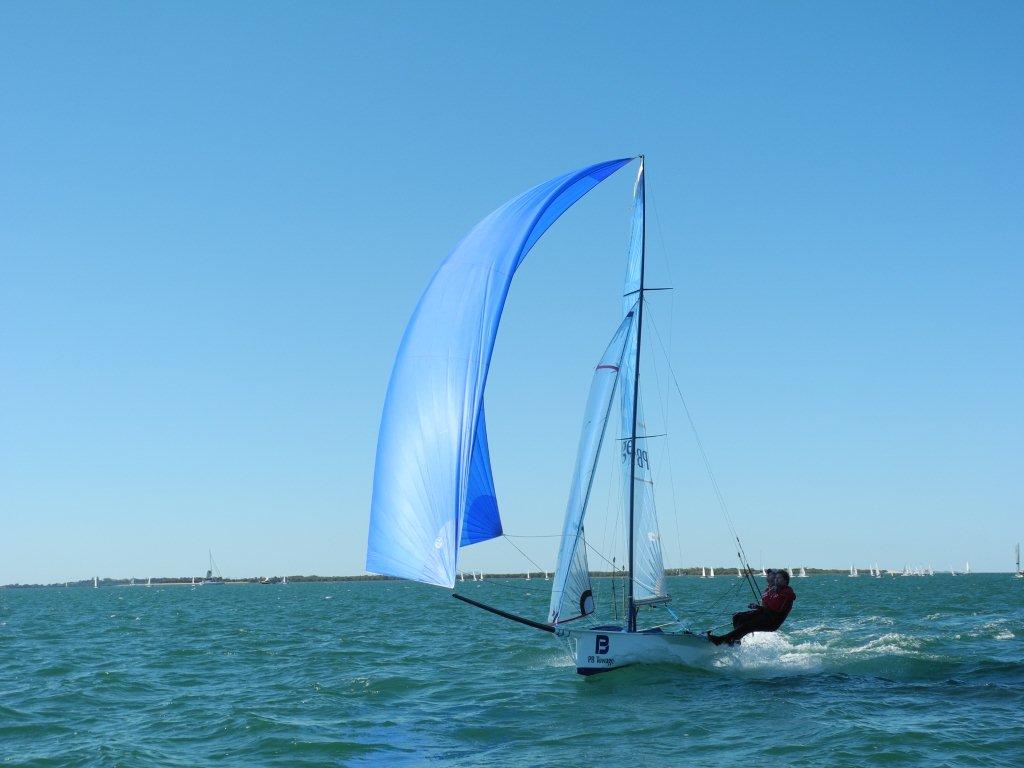 They are calling it Big Saturday and even typing this two days later hurts my forearms..!!

The scene was set for an epic day of racing.. The forecast was for 15-20kts out of the South with an incoming tide.. We all knew it was going to be lumpy but didn’t think it would be anything we couldn’t handle with our little 3rd rigs in the boat.. Not all of us put in 3rd. Tank Girl and Havoc went 4th as they had been out the previous day and probably had an idea of what was to come..

We hadn’t even got out of the harbour before we knew we’d made a slight miscalculation with the breeze… John and I were hit by a gust and it felt like a freight train! Main and jib ragging inside the harbour was a dead giveaway we were in for an interesting afternoon..

The racing was fun but the rides and crashes were the highlight of the day, so instead of giving a “Race Report”, this week we’re going to share some of the stories told over a cold rum when we got back to the beach..

Our most memorable moment was not a crash, but an almighty save..

The breeze was cranking, and from the moment the kite popped The Wingman just took off.. The ramps were epic and we were spending an awful lot of time in the air looking for landing zones.. We were coming in to the bottom mark hard and fast..  I was out the back hanging on tighter than B-Mads cougar with lock jaw.. We saw it early, we both knew it was not going end well.. It was about 3 waves ahead and I said casually to John.. Big bastard ahead.. It was big alright.. We leaned back but as we reached her there was just nothing more we could do.. The bow had nowhere to go but under.. John flew forward and smashed in to the side stay.. I was right behind him.. John bounced off the side stay and rugby tackled me backwards.. It seemed he was getting to the back of the bus no matter what..!! The bow came through the back of the wave Volvo 70 style but I was gone.. Hanging on to the tiller with my fingertips, facing backwards just skimming along the surface of the water.. I think anyone who’s driven a 12 knows this feeling of total desperation and helplessness.. John managed to keep the kite full and the boat upright for what seemed like an eternity.. The boat was still going bloody quick and bouncing over the crazy chop.. Suddenly I was slapped in the back by another almighty wave and before I knew it I was spun around and flying feet first through the air straight back at the gunwale.. I landed it and immediately called for a gybe drop. We had overshot the bottom mark, I had swallowed half the bay and we let the Ghetto boys sneak through us, but that didn’t bother us one bit.. We had just pulled off one of the greatest saves either of us had ever done and we didn’t even get the kite wet.. This was the first lap of the first race and our heart rates were already maxed out.. What an afternoon.! This is exactly the reason why we sail 12’s.

We were over at the start, so ducked behind and rounded the pin. Headed to shore and got angry, so boat was flying low and fast. We came in to the top mark behind Havoc, but just in front of Tank Girl, Squid and Wingman. Felt breezy, but anger was clouding judgement. I took a nice line through the bear away, with a little heel on, going pretty fast. The boom-mounted video shows Crossy, so he can’t have been back far enough. Hit some lumpy waves and drove it in to the mast step. Thought it would come out, so held on, then boat was 45deg and started coming back at me, Crossy gone and too late for me to hold onto anything. I landed a WWE full body slam on Crossy, his jaw must have caught my hip because he chipped his front tooth. I can’t recall a 2 sail mine with 3rd rig. Pulled the kite up and had a super epic ride to the bottom, now that the nerves had subsided, and only anger remained.

Not sure what happened… Brad went partying in tight pants and a green hat, then watched his mate get beaten up by a taxi driver before being chased on foot by the police… Typical BMad weekend.

Tank Girl had 12′ newbie Jono Anderson as fill in crew for the day.  I knew he’d sailed 18’s and 49ers before, but it was looking kinda fresh out there.  Fresh enough to leave your 18 or 49er safe at home, in any case.

At the briefing, John Chiplin our PRO proposes we do two three lap races.  With a gate.  With a gate?  Some quick arithmetic and I determine that if I can execute 14 perfect gybes on 10 perfect laylines in about 20 knots of breeze over about 2 hours of race time, on an outgoing tide with water up my nose and the sun in my eyes we’ll be fine.

After extensive deliberation, I concluded the chances of this happening were slim although Jono was brimming with enthusiasm.  My proposed ‘no gate’ solution was howled down as a ploy to give advantage to our never-tried crew combination.   Just as well our 4th rig goes nicely, we’d need all the help we could get.

So our start was rubbish, but I was happy enough to be cruising along and not OCS.  Top mark looked a little interesting.  Ghetto did a nice slow mo mine in front of us, leaving a boatlength gap to thread between the bouy.  The boom touched it but we made it and the kite was up.  A few seconds later, Havoc was upside down in front of us.. we gybed shortly after and.. that layline.. was well gone.

A couple more laps and 5 perfect gybes later and somehow we were in front.  Any gybe that’s not in the piss is perfect, right?  We got hit by a gust and towed… I’d better mention here I’d ‘forgotten’ to mention ye olde ‘1 wire’ safe downwind technique.   The bow swung about 20 degrees and the boat was going off like Richard’s French Terrier on your leg.. Jono yelled something like ‘this doesn’t feel safe’, his back foot desperately searching for a fruity.  ‘No, it’s not…’ as I tried to resist being pushed off the back of the boat.   Somehow we made it round and crossed the line without capsizing.  Nice.

Unfortunately the second race wasn’t so great..   Josh did a great job to take the win.  Ghetto Sled went home because ‘they were too sore’.  The wind and chop were that little bit worse and we flailed through some tacks and the gybes were getting messy.   Two sail home with a grin from ear to ear.