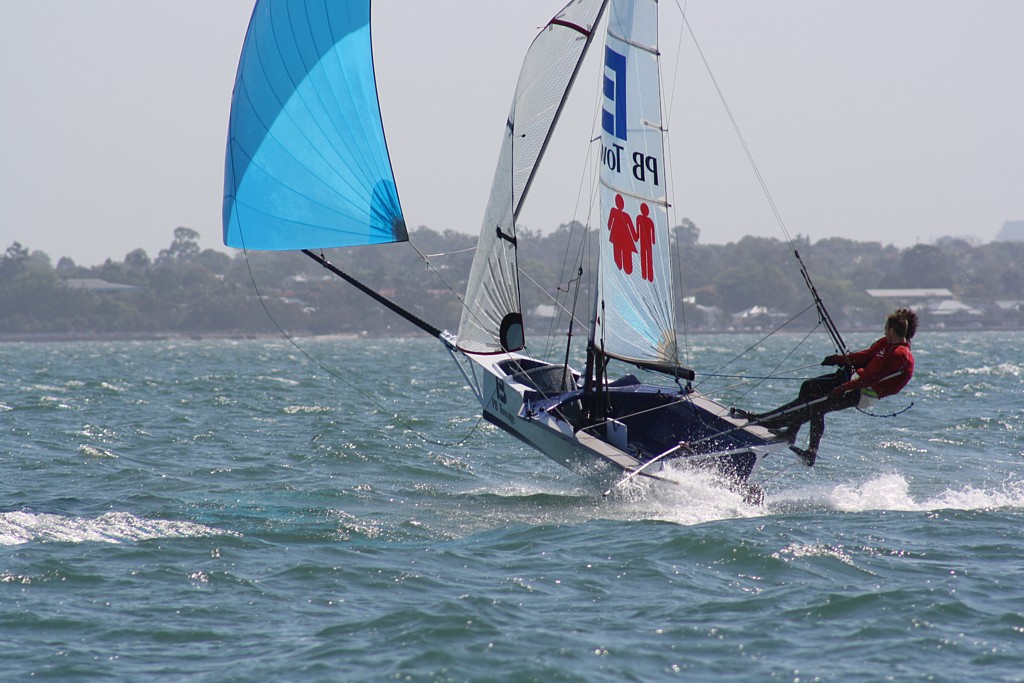 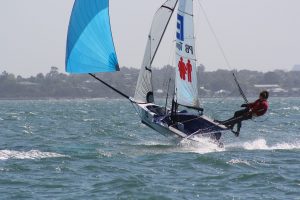 With the blood still pumping from last week’s rides, we were seriously excited about another weekend of 30 degrees, 20kts of breeze and an outgoing tide..!!

It was another timely reminder that there is no other class like a 12.. The thrills, the spills and the huge air..!! I can’t think of any words to describe the feeling. B-Mad help me out.. I heard you got a B in English…

The day started like any other Saturday.. The sun came up, I kissed Jen goodbye and headed to the club.. I was told long ago that chicks dig routine.. If it’s Saturday, you hook up the boat and head to the club.. Whether there’s racing that day or not, you never break the routine…

We arrived down at the club to a steady 20kts out of the North.. Yeeooww..!!

Numbers were down this week, I expect better from you lot, but PB and Old Yella were quick to slot in third rig and mentally prepare for the sweet, sweet rides that awaited us.. It was the usual team on PB but Old yella had an all-star cast including the new owner B-Mad and guest skipper Benny G.. The day was scorching so we knew the breeze wasn’t going to die.. If anything it would build and with the tide about to turn, we knew it would be lumpy..!!

We both headed to the start line with plenty of time.. We decided to do a little rabbit hunting so Old Yella started a few minutes before us.. Run rabbit run..!! The sea state was lumpy.. Really lumpy.. Text book Moreton Bay chop.. Driving to the top mark was tough.. Even the skinny boat was having trouble holding the groove.. The top mark was yonder.. I mean up near St Helena Island yonder..!! The waves got bigger and better between the islands and we copped a fair bit of white water over the bow.. It must have been even tougher on the fat boat as we’d caught Old Yella by the second tack..!!

Around the top and up went our little blue kite.. Locked and loaded (yep I even used the fruities) Tristan and I screamed downhill.. The ride was fast and the angle of the waves was delightful.. Magic moments..!! We found a flattish place to gybe and headed back towards the start boat.. This angle was messy.. We were going straight down the waves and there were quite a number of times we had to chicken out and slow the boat down because there was no doubt whether the next wave would spit or swallow.. We were a little high on the gate so another gybe was in order.. Trying to find a flat spot was impossible so I said a quick hail Mary and we bounced our way through the gybe.. We made it..!! Now to send it to the bottom mark.. At full noise and the right wave angle this was probably one of the best rides of the day.. We rounded the bottom mark and looked around to watch Old Yella doing her thing.. B-Mad and Benny looked like they were riding an angry bull out in Longreach the way that kite was bouncing about..!! We watched for a while before getting back on the job and racing back to the top mark.. This time we headed in to Green Island. The water was flat but the breeze was patchy… We sailed past the RQ Hobie top mark.. Then the Etchell’s top mark, before finally getting to our skiff top mark.. We rounded it without a drama and in no time at all we were both on the wire having a ball-tearer of a ride.. I was as far back as I could go and Tristan was leaning in to the gusts.. What a ride..!!!! We gybed a bit later this time and headed straight towards the gate.. Then we got towed… The waves were huge and the breeze was on. We had all sorts of trouble keeping the boat in the water.. Ahh, who am I kidding.. I was driving her sky high, trying to get the biggest air possible.. It was unreal..!!! I knew we were going to miss the gate and I started telling Tristan that we were going to have to drop the kite to make the gate.. He promptly told me to get out of town and that we were going to ride this baby to the bottom. Who am I to disagree with The Ton..??? We sent it harder and it was epic..!!! Old Yella had retired from the race as their main had come out of the track.. Shame because these rides were amazing..!! We had to gybe again.. Flat spot..?? Ha..!! We had to go and threw it in.. We bounced straight in to the next wave and the boat loaded up.. Splash.. Oh well, up she came and we were once again smokin’ to the bottom mark… With one lap to go and a few hungry 18’s loitering around us we decided to put in a big last effort.. We lost a bit of ground to them due to waterline length, but not as much as they would have liked :o) We navigated our way past an upside down 18 and were up the top for the final time, and knew this was to be our last ride of the day… ENJOY THE SEND..!!!!!!

We launched our way through the finish line to take the points.. What an incredible day on the water..

The ride home was as always, simply spectacular..!!!

We bounced our way past a couple of Hobies and were again reminded that 12 foot skiffs are by far the best fun you can have on the water..!!

Thank you to all the volunteers on Saturday.. It will be a day I’ll never forget..

I’m told we’ll have the full fleet back out there this weekend, GAME ON..!!