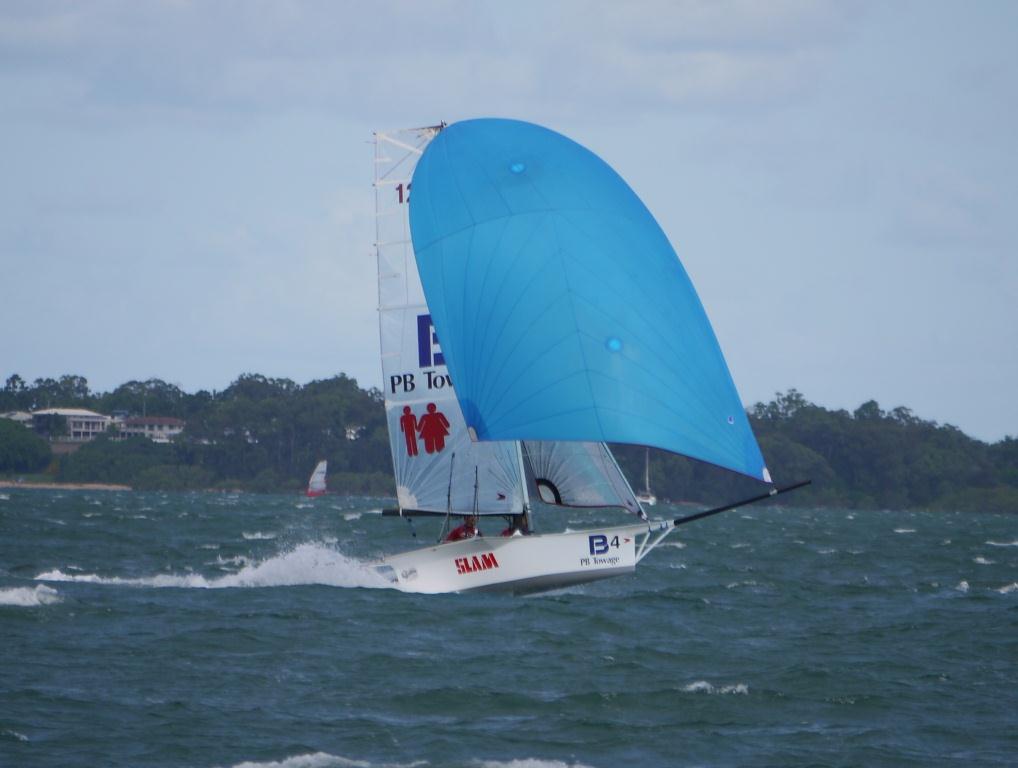 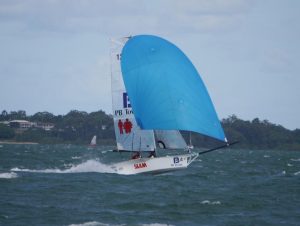 After a slow start the QLD State titles are now in full swing, and boy is it close at the top.!!

Nobody knew what to expect.. The forecast was for a bright sunny big rig day with the wind coming out of the East.. When we woke up on Saturday morning it was cloudy and blowing 20kts from the South.. WOOT WOOT..!! Better pack the little rigs..!! Down the bay it was the same.. Wet and windy..!!

PB was first to arrive.. With the super keen Flying Animals next to roll in.. Squid managed to sneak in between rain squalls and Ghetto Sled did a quick drive by.. Richard took one look at the white caps and decided to scurry home and get his little gear.. Oh it was on..!! All crew were totally amped for the racing.. We were excited about the States, but more excited about all this unexpected breeze..!!!

PB made the call and threw in 3rd rig.. We had just finished rigging when the wind eased to about 13kts.. UUGGH

H..!!!! Tristans pained face was very obvious.. I took him aside and pulled out the trusty iphone.. It was blowing 20-22kts down at the Gold Coast.. It’s not going to die out.. Stay excited..!!!

All boats threw in 3rd, well the Flying Animals had the same “3rd rig” combo they used last week, and we hit the water.. The first race was to be both heat 1 of the States, and heat 1 of the Alan Reid memorial.. Pressure was on right from the start.. PB stomped out of the harbour at full 3rd rig pace.. We managed to scare the bejesus out of a bunch of girls on a rubber ducky.. We snuck right up behind them and flew past.. They just saw our mighty black pole and screamed. Oh it was going to be a fun day out..!!

We got to the start line and the heavens opened up.. Well most of us got there.. The Flying Animals got lost in the rain squall.. The breeze began to drop.. Uh oh… By the time the race got underway we were sitting out there in 0-4kts with 3rd rig.. NIGHTMARE..!!

The fly weights on board Ghetto opened up a small gap on both Squid and PB.. We went around the top mark in that order.. Both Ghetto and Squid gybed early to get to the gate..  PB did not.. We tried to get in a line of breeze out to the right.. We got to it but we were way off course.. We gybed back and again and again.. No luck.. We were falling further behind.. Dang..!!

The next upwind was just as slow.. It was a parking lot up at the top mark.. lots of tide and no breeze.. Ghetto did some flip flopping but rounded first.. There was barely enough breeze to fill the little orange kite.. Squid struggled around next.. PB had found some gas out to the right hand side of the windward beat and made up some valuable ground.. We were back in the game..!! Unfortunately we too got stuck at the top mark.. The other two boats had their kites up for what seem like an hour before we were able to finally get around.. We all drifted towards the bottom mark.. Slow and steady.. Wasn’t this exactly what we had been looking forward to all week.. YUCK..!!

Tristan spotted it first.. The rain had cleared and there was a line of breeze making its way down the course.. Ghetto and Squid had just about rounded the bottom mark.. PB were still reaching for the gate.. The breeze hit us like a sledge hammer.. We were off..!!!! We tried a late gybe on the pin end of the gate.. Unfortunately we were too late and splashed.. Another glorious moment for the mighty PB Towage.. This day was not shaping up well for us to retain our state title..

For the other boats, the race had just got interesting..!!! Ghetto got around the top mark first but had a sloppy set and flopped over… They needed all their mad skillz to right the skiff before they lost their lead to Squid… Squid came around the mark like a fat boat possessed..!! Up went their big white kite and BAM..!! Flat chat down towards the finish line… Ghetto had to hustle.. They threw up their orange kite and away they went.. Both skiffs at full pace and opposite sides of the course..!! Coming in to the finish line Ghetto had right of way and the legs so they took the gun.. PB had a smoking ride to the finish too, not all that far behind the other two skiffs.

The second race was set to be a doozy.. With the breeze back, spirits on board PB were high high high.!! The start was not bad either.. Ghetto got it by a nose, PB were under them and Squid half a boat length back and a bit higher.. PB were able to hit the go button first and shot out from under Ghetto sled.. Haha..!! Oh what a fantastic feeling it is to have speed to burn..!! We hit the left hand corner and made it around the top mark in first place.. Squid was next and Ghetto sled not far behind.. I can’t give too many of the details because to be honest, we had a bit on, and I was focusing pretty hard on keeping the mast pointing upwards.. What I can tell you, is that with wind against tide, there was some massive air being had..!!!! One of the biggest days we’ve had in a long time.. We rounded the bottom mark and looked up the course.. It was a graveyard.. Squid were bottom up and Ghetto Sled were nowhere to be seen either.. The Flying Animals were near the bottom mark.. Watching the action.. What a spectacle it was..!!

The second lap was pretty similar.. We just hit the safety corners and threw up the kite.. Yahoo..!!! Squiddy were in hot pursuit, but not really an immediate threat.. Ghetto were following Squid and enjoying the top end third rig conditions.. PB were first to the bottom for the last time after sending it hard.. Squid followed and left Ghetto floundering around after a messy drop.. PB stormed home for the victory and waited patiently for the others.. We watched Squid stomp down.. Man were there some ramps..!! It was certainly turning in to an epic day on the bay..!!

As we waited for Ghetto to sort themselves out, we had a little pow-wow and decided that the last race of the day should be shortened… There were some pretty tired crew out there… It’s amazing how much a drifter takes out of you.. So we were in to another start sequence.. The Flying Animals headed for home.. They had got their best kite ride of their lives and were happy to call it quits.. This time Squid played their card early and had a flying start..!! We called them up but they stormed over us… Well…. Not quite… Once again PB was able to crawl out from under and managed to get their nose ahead.. Phew.. 2 from 2 boys..!! Squid tried to pin us in the corner but tacked too early.. We tacked too and got the lay.. Ghetto had tried hunting up the right hand side for some flat water.. It didn’t pay and they rounded in third..

PB made a mockery of the tricky gate course and smoked down to the bottom mark.. Again I can’t go in to too many details because I didn’t really see much.. I was too focused on making PB fly..!! We hit the corner and by the time we finally looked behind us, the other skiffs were further back than fullback..!! A quick set and a stomping ride home… WHAT A DAY..!!!! On the way to the ramp, my back leg had the major wobbles… I thought I was going to shake right off the back..!! Man it was good fun.. Gotta love it lumpy..!!

A big thank you to the race committee.. It was a tough day.. The courses were practically perfect and Chris your organisational skill is always top notch. Thanks.

The next two heats of the QLD titles are to be held at DPSS next Saturday.. We are sure to have a few more boats on the water next week so get excited lads..!!! It’s still anyone’s game..!!

P.S. It must have been tough to watch Terry.. Those rides were better than they looked..!!!!