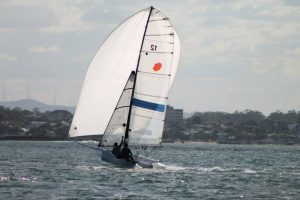 After months of planning between the B18SC and DPSS, the big day finally arrived. 29 skiffs of all shapes and sizes filled the rigging lawn to capacity, with the 4x 18s, 7x 16s, 2x F15s, 5x 13s, 6x 12s and 3x cherubs. There was even a prize sponsor in Camping and RV Capalaba, and cash prizes donated by the 2 organising clubs.

The weather was light light for Race 1 and this threw a cat amongst the pigeons results wise. The mighty Wingman was quick out of the blocks and kept going to lead the Div 2 fleet around the 3 lap course. They were first home out of both divisions by 15mins!!!! Despite the 18s and 16s having a slightly longer course, the local heroes showed they’re a force in the light. Ben G was seeing if the grass was greener on an 18footer and the jury’s out. He may put the Tank Girl on the market in the offseason. BMad also got the call up and did some fine crewing on the PB Towage 18. The interstate travellers, the F15s, came in 2nd and 3rd, with Ghetto home in 4th after a run in with a cherub at the start line and a slow comeback after heading to the 18s top mark. It should be noted that the lead cherub, Elegantly Wasted, steered by Richard’s wife, beat him to the first mark. They were kicking arse in the light stuff and deserved to talk smack during the kite hoist. 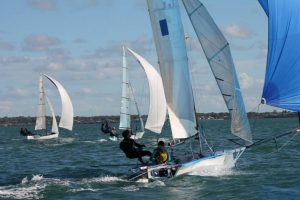 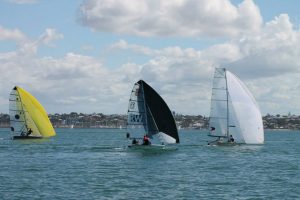 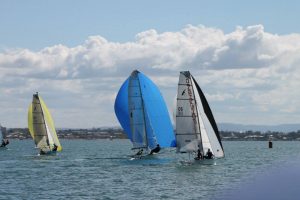 Skiffropes.com had a solid race, showing speed in the drifting wind. Pennyliss also showed the goods, running 2nd for a lap. Allwood, with ring-in crew, started late to finish amongst the 13s and Squid was slow due to the 2nd rig. Not by choice, but due to a roundabout accident which sent their #1 mast to the scrap heap.

Race 2, the breeze had kicked and was now a solid 2-string big rig. True form began to show, with Ghetto stepping out up the first work and never headed. The F15s hit their max speed and were mixing it up with the 13s. Skiffropes.com came home in 2nd after a good battle with the 13s too. Pennyliss started to realise why you change to 2nd rig as the wind gets up as they stayed just in front of the cherubs. Squid, Wingman and Allwood went home after race 1 to make sure the beer was cold. Ghetto won the 12ft class and Division 2. Winning Appliances won Division 1.

Overall it was a great day for skiff sailing in Brisbane. Plenty of talented young (and old) skiffies, ready to make their mark in their respective classes. The clubhouse was a buzz of activity after racing with a live band and BBQ keeping everyone entertained.