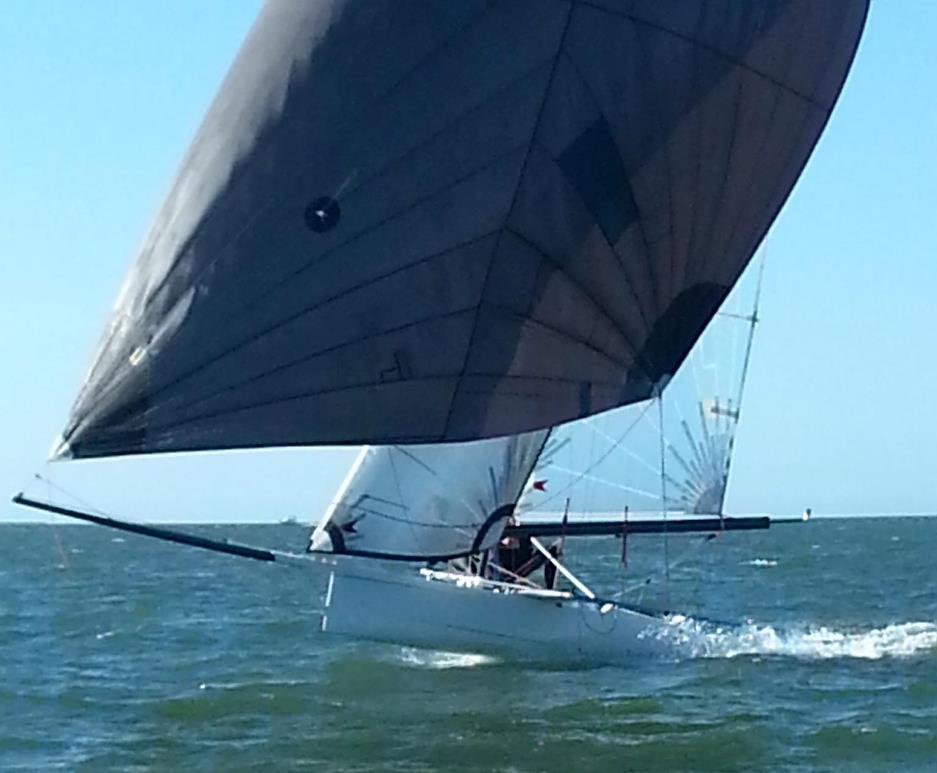 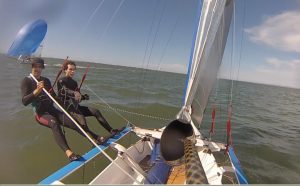 I called Richard – I was missing a few bits and the morning had been chaotic.  Better bring Ghetto Sled in case an all-important component had been forgotten.

Over the last week two weeks the 2nd rig has been re-built.  Spreaders, 300mm higher were now permanent, the pocket luff was getting sewn on with a zip, the way it should be.  The tack line had been re-run and the halyard cleat adjusted. That’s the short list. 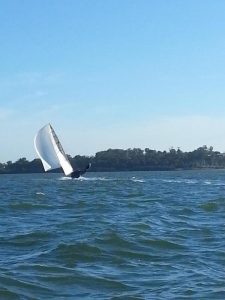 We arrived late and rigged.. PB and Squid had left the beach with their big rigs.  Ah well, we hoped the NE’ly would fill in to get us around the course.  The start was a pretty relaxed affair, with Squid looking good and covering PB, with us behind and to windward.  Time to see what the new girl could do.  Sheeted on ‘about right’.. There was a nice 10-12 knots, just enough to two string.  Speed was good.. a little unexpected as she went through the waves quietly.  Sometime then we discovered we were pointing a few degrees higher.. the top mark came up, hoisted the kite then looked back at Skinny and Terry with a cheeky smile.  The run was going to be a test to see if we could hold them out with the old #2 kite; we held the gap.  The next lap was pretty uneventful for us – high fives as we crossed the line! 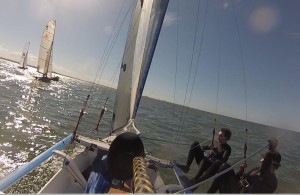 Race two.  We were getting into the swing of it, perfecting another lazy start.  The crew usually has the starting watch, right?  The mighty  PB had pace at the pin and i14 rock star Andrew Barney up the front.  The wind was

patchy, I didn’t want to land ourselves in a hole.  Didn’t matter, because just then our main sheet block came away from the boom! Disaster! We tea bagged and the boat stopped while I lashed the block back on with the all purpose emergency string.  Skinny and Terry disappeared. Straight into a hole, fortunately, and that saw us first round the top mark again!

Up went the kite.. sort of.  Richard ‘guns’ Billett scurried aft and disentangled the retrieval line at the rudder pod.  Expecting to get rolled I held us high, only to look back and see the PB in the same predicament.  As they prawned the big kite and the mast fell into the bay, I doubt Barney saw the humour the rest of us did.  Terry was hot on their heels and didn’t waste time getting on our case – Squid’s kite was looking pretty big and we weren’t confident we would find pressure on the run.  By the bottom mark Squid was with us.  Terry invoked the two hull length rule at the bottom mark, correctly assuming I’d never steer my new boat into my old boat.  I don’t want

to re- paint that Squid.. We gybed twice and went wide around the mark.  Back on the wind the slippery Squid was squeezing us out.  Lucky for us, the mysterious high groove solved our problem while Wayno ducked in to tidy the kite on Squid. 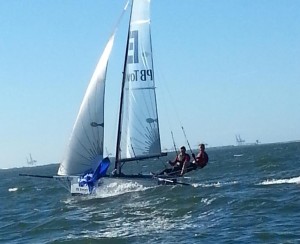 From then on it was smooth sailing for Tank Girl.  After the finish Richard took her for a hot lap; Terry sent Squid on her ear towards Lota creek, and Skinnyman finished his swimming lesson.

Good luck to Skinny and Elliott on the PB Towage, racing in the nationals over Easter.!