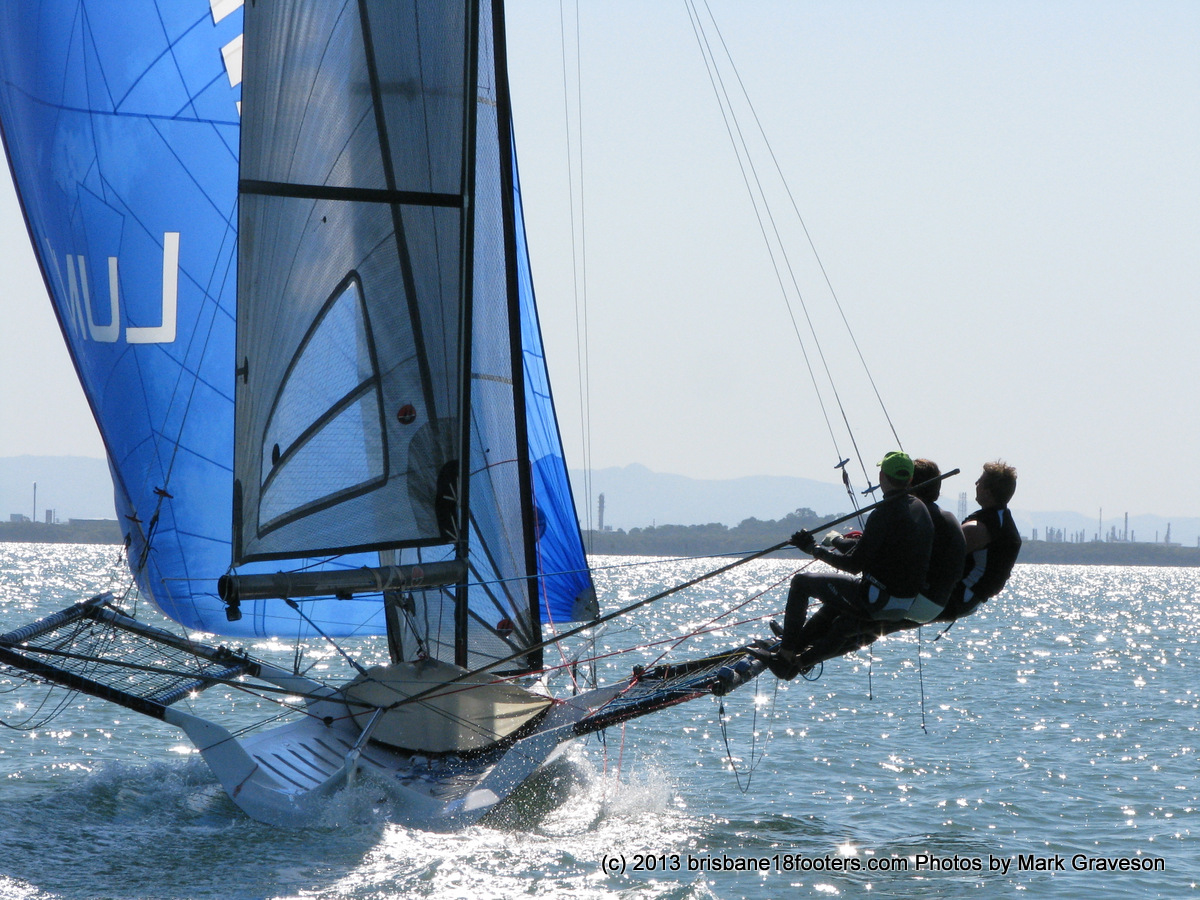 A good turn up for the 18s saw 5 skiffs assault the start line for the first two heats of the Club Championship (some more aggressively than others).  It certainly made the rigging lawn a little more hectic and having learnt our lesson about what time 2PM is the week before we were itching to hit the water a little earlier than usual.  As it turned out we hit the start area with a only 3 minutes to go.  The pre-race lawn banter all centered around will it or won’t it?  Will the expected 20kn Northerly hit the course before, during or after we race?  It made rig selection one of those moments where you could come out looking like a rock star or spend your afternoon learning whether Moreton Bay jellyfish are suitable eating.  Brisbane 18Footers.com (with a fill in skipper and sheethand, Josh and Tristan), and Pendeo went big rig.  The rest went conservative (I can’t print what we called it Saturday).

On arriving at the start line, it looked like the big rig decision was definitely going to pay off.  For Brisbane 18Footers.com the start came and went, and so did they.  Pendeo with the other big rig, was buried second row (seems being at the start line doesn’t help their placing) and got caught on the left hand side unable to tack back to the favoured right.  Ullman Sails had their new number 2 rig monster out, and upwind it certainly had some legs, even in the light.  Unfortunately it didn’t help, another skiff that ended up on the wrong side of the first shift.  Brisbane 18Footers.com, Winning Appliances and Nicstar Global were all left with young Josh (soon to be known as “Super Sub” if he continues winning races on other boats!) taking a commanding lead at the first mark.  Second round was Winning Appliances, followed by Pendeo, Nicstar and Ullman Sails.  Ullman Sails managed to sneak past Nicstar on the first run and from there the placings remained largely unchanged to the finish.
Pendeo and Ullman Sails crossed tacks a couple of times up the last beat but the bigger rig on Pendeo eventually kicked in to give them the third placing behind Brisbane 18Footers.com and Winning Appliances.  Ullman Sails came home for the fourth and with Nicstar rounding out the fleet.  After a very shifty and longer than usual first race, the committee (Tristan) decided we should all only race a 2 lapper on the second race (that knee of his must be playing up). 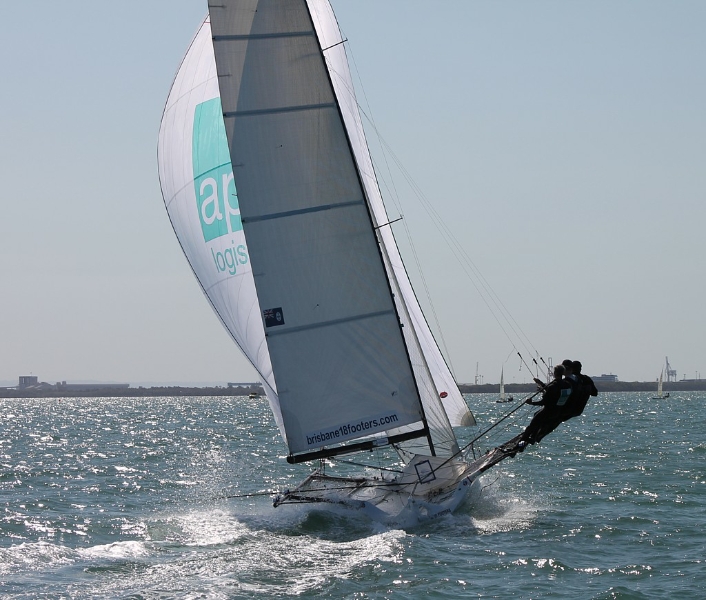 During the half time oranges, the breeze steadily built to a comfortable 15 knots and the number 2 rigs were starting to look like a good choice.  Laying the pin end of the start line was a bit challenging and Nicstar became somewhat of a punching bag for Brisbane 18Footers.com off the line.  Winning Appliances smashed through on port tack mid line and Pendeo opted to head that way also after another late starboard tack start.  The breeze was now well into the teens and approaching 20s during the gusts.  Winning Appliances and Pendeo smacked the right hand corner hard.  At the first rounding it was Winning Appliances and Brisbane 18Footers.com in the lead with Pendeo, Ullman Sails and Nicstar not too far behind.  The first run was fast with starboard tack being favoured, the leaders rounded the bottom mark within ten metres of each other and proceeded out to the right hand corner for the final beat to windward.  Brisbane 18Footers.com tacked to lee-bow Winning Appliances at the corner, banking on their slight height advantage to squeeze out the windward boat.  However, Winning Appliances wasn’t taking the bait, and rolled over Brisbane 18Footers.com to round the final mark slightly ahead.  The final run was action a plenty as the breeze had swung north and kicked in a little.  Boat speeds on the 18s were now reaching the 20 knot mark and all crews were hanging on.  Winning Appliances took the gun and Brisbane 18Footers.com right on their heels.  Pendeo rounded the final mark in 3rd having staved off a second beat charge from Ullman Sails.  The number 2 rig was certainly a faster set up for the final beat, but Pendeo managing to round the final mark in front, Ullman Sails would need a mistake on Pendeo or the angle to be too shy to be able to find the passing lane.  As it turned out the mistake came as Pendeo almost capsized at the final bear away.  Unfortunately for Ullman Sails the mistake wasn’t quite big enough and Pendeo blasted away down the run to take third. 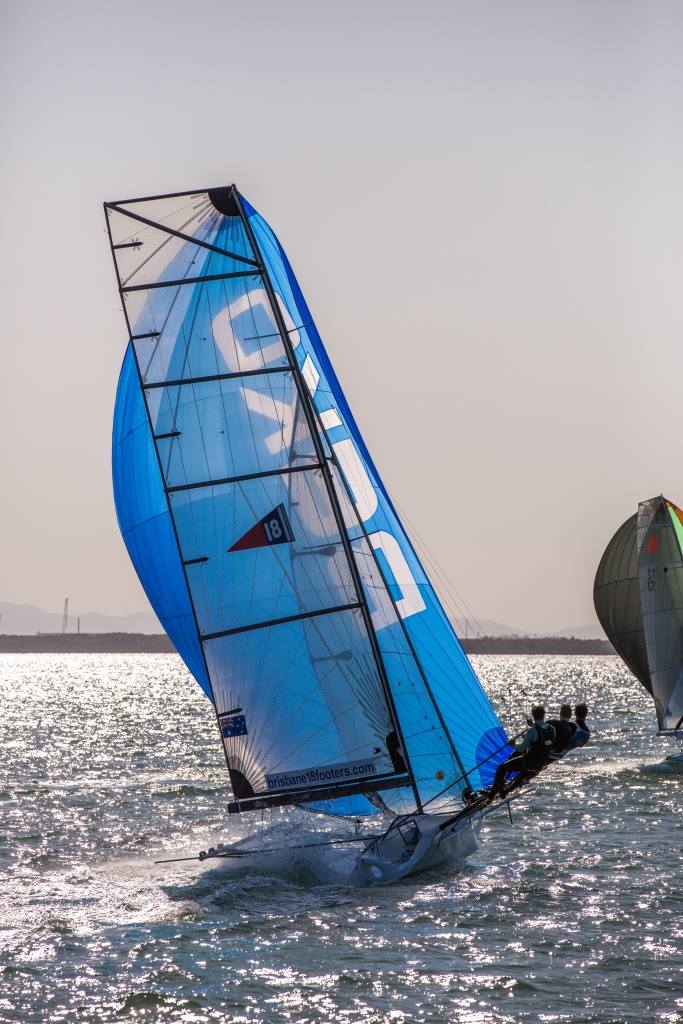 Ullman would follow for a fourth and Mitch with the Nicstar team would come home in fifth.  Nicstar had a few swims in the final race and talking with the skipper I think the boys did a good job getting home in one piece.

They weren’t the only ones with drama though.  Brisbane 18Footers.com and Pendeo managed some spectacular wipeouts after the finish.  Both skiffs were eager to get back to the beach, realising the wind was only going to get stronger, making it harder to get back to the beach with the larger sail area.  Brisbane 18Footers.com tried the bear away first and splashed.  Pendeo seeing the error, decided to go a little further and find a nicer spot to swim.  Their bear away is the stuff of myths and legends…  swipe the bow down and surface to wonder what happened, where did your hat go and who stole your sunnies?

All in all a fantastic day on the water and great start to the 2013-14 Club Championship.  The Queensland 18ft Skiffs and 12ft Skiffs sail most Saturdays from Darling Point Sailing Squadron in Manly.  Come on down to check out these flying machines and see what they are like up close.

The points for the Brisbane 18 Footers Club Championship for 18ft Skiffs is allocated across a mixture of scratch (across the line) and corrected time results.  Full results are here.