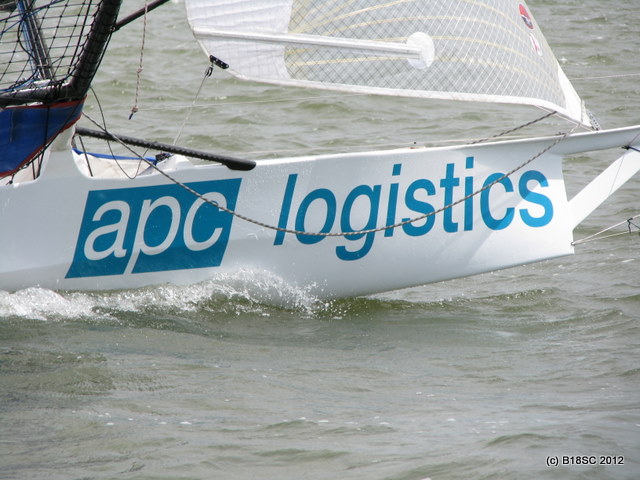 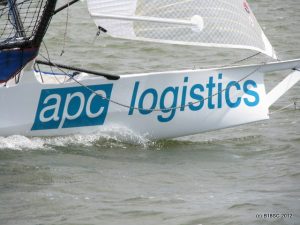 Much more rain, and we could have held the race in the park.

The forecast had all three crews wondering which rig to put in. Much checking of Seabreeze ensued. After much debate, we all reluctantly started putting the big rigs in.

Once the boats were upright, of course a squall came through, making us all second guess ourselves, but in for a dollar as they say. What could possibly go wrong….

Once out of the channel, we told ourselves how smart we were going with the big gear, laughed at the 12’s who went with 3rd rigs and started looking for our start line. As we sailed up to the line, Shane yelled out there was a minute to go. Talk about timing. Then we realised the information would have been more useful if our start watch was on the boat rather than in the trailer. Rookie error.

Out of the blocks and Shane and the lads on Winning Appliances got the better of the start, with Adam on Bluewave poking the eyes out of it. We were soon having a very bad air day, so we threw a quick tack out of there to find the mark. Coming into the mark, Shane had found good news on the left and smoked us, while Adam tried the sneaky tack inside at the mark, but a nice bit of pressure let us roll him into the mark and grab 2nd by a boat length.

Down the second run, Adam managed to send someone for a swim after breaking a kite sheet. After going back to get him, he was almost a lap behind, and with Shane well and truly out in front, it was cruise and collect time, with Winning Appliances getting the gun, APC Logistics 2nd and Blue Wave Rigging 3rd.

Despite the rain and the lack of wind, it ended up as not a bad day’s sailing. Next week is the first 2 heats of the Queensland Championships, so the racing might not be as relaxed.