[singlepic id=324 w=320 h=240 float=left] This morning saw a busy SE breeze blow up with gusts to 17/18 knots and a runout tide of between 5 and 7 knots set to make for an interesting day's sail. 12 boats were rigged up to face the starter, 5 from Qld and 7 from New South Wales. With the start set for 2pm the postponement pennant went up to allow a cruise boat to leave from the Hamilton Wharves.

[singlepic id=336 w=320 h=240 float=right]Drama before the race saw Keriki hit the briny, and with the tide running quickly headed for the nearest moored boat, a wharram catamaran, and promptly lodge itself between the two hulls. By the time she was released, her series was over with a broken mast, bowsprit and cracked gunwales. Fortunately though no-one was hurt even though, Coral was caught briefly under the main.

With the start now at 2.30pm the tide continued to run and the wind built up. Number 3 rigs were popular choice, while some opted for 2nd rig with small kites. With the start out front of the club, the wind began to swing to the south a little making for a broad reach through the start line with a big tide pushing boats out. A very conservative start by all saw Lil Imp jump on it and get away to an early lead before hardening up once around Bulimba Point and working up to Colmslie Reserve, under the Gateway Bridge.

Once on the wind, Miss Marlene raced up to lead Lil Imp all the way to the top mark, with Merle recovering from a sideways start in the tide to be fifth around. Third was Irene-M, closely followed by Avro. From here the fleet hit the wall.

Miss Marlene, while heading out set a kite hit the drink when the wooden tiller extension jammed under the gunwale to leeward just as they got hit by a big gust. Result: no kite set, tow to the beach, bail and head for home as once the mast hits the water, the race is over for you. Next to go was Merle who sprinted up the first work only to round the mark, hook up their backstay and see a windshift bang the boom into the stay – goodbye Merle.

Gunners Daughter who had a tentative first work with new crew, rounded the mark, set the kite and began to motor, only to fall foul of a gust and the swell, which finished their race early for them. There was one more boat who was destined to DNF today. Truant looked pretty comfortable coming down under a small kite until everything fell apart in a big way, rounding up in a gust, unbalanced and over she went.

Up front Lil Imp and Avro were jousting at each other for the lead, with Lil Imp Just in front on the last spinnaker leg to the finish. Wrecker came quickly down the south shore but when he had to get to the middle, dropped off the first two local boats, Meanwhile, Irene-M was looking good in fourth spot.

Around the bend of Bulimba Point the boats had to drop kites and push the tide up to the finish line. Lil Imp held her spinnaker on a little longer than Avro and ended up in the middle of the river, while Avro went to the south shore. Lil Imp held a slight lead until she went below a moored boat while Avro got above it, loosing pressure she watched Avro slide through before moving again and realising she wasn't going to make the finish line. Avro took the gun, Lil Imp had to sail past the line before tacking and coming back with the tide to try and cross the finish line on the right side. Meanwhile Wrecker and Irene-M were edging closer, with Wrecker taking 2nd by 8 seconds from Irene-M and then Lil Imp in fourth. Jessie came home fifth, Truant II sixth and Kismet held on to finish a game seventh in their first outing. 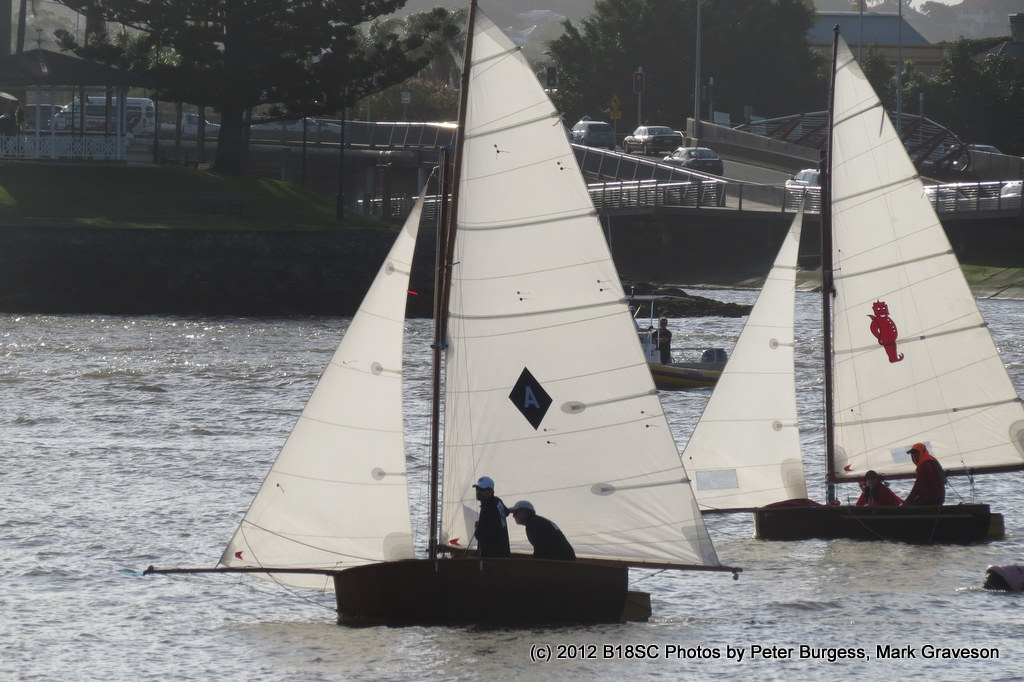