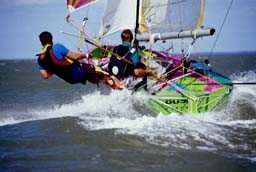 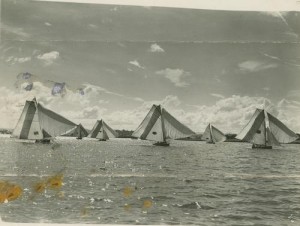 Beautiful one day, perfect the next.. That’s the slogan, and boy has QLD lived up to it, with near perfect sailing conditions for the 3rd and 4th races of the season.. The breeze was from the North and a constant 12-15kts when we arrived at the boat park.. With a forecast to build..!! We all threw in our trusty 2nd rigs and hit the water on time for the 2pm start.. All except Brendan and Joel that is.. They put their big rig in again.. Power moves..!!

The start was somewhat controversial with what looked like all boats across the line early and the recall flag flying high.. Fortunately for us on PB we were forced out even though I’m sure we had rights.. We tacked off and crossed the line well behind the fleet and after the starting gun.. Tank girl came back for the recall and we all continued sailing with a few grumbles from the back of the pack.. 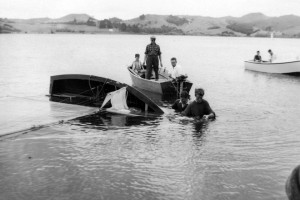 All was forgotten by the top mark with all 5 skiffs arriving within a few boat lengths.. There were boats being rolled and boats rolling over with the breeze building on cue for the kite ride..!!

Squid were around first followed closely by Ghetto Sled, Tank girl and Allwood sails.. PB brought it up the rear but a sloppy set saw Allwood tip it in to windward and Tank Girl narrowly miss an ugly mast tangle.. This all happened right in front of us on PB, and we had to go low and slow to get past them while the other boys were smoking down to the bottom mark..

It was a quick ride, but we covered a fair distance.. Ghetto rolled Squid and managed to stretch out a bit on the fleet with all the dramas happening behind them.. Squid rounded in second but were closely followed by Tank Girl.. PB made up some lost ground but we were not yet within striking distance.. The next beat saw a split fleet with Ghetto heading right to enjoy the tide and Squid and Tank Girl picking the shifts up the left.. PB also went right but by the top mark there was very little positional change.. Ghetto were leading with Tank Girl squeezing through Squiddy and PB following not too far behind.. Allwood were there too, but not really in the hunt. Halfway down the run Squid and Tank Girl were having an epic battle with both boats sending it hard and trying to get ahead.. Terry was able to go a bit higher and was halfway through rolling the Tank Girl when their bob stay let go… Everyone on the bay could feel the disappointment.. PB scooted past as Squid hauled in their big white kite.. The gybe came as a surprise for some and Ghetto overlayed it by a couple of hundred meters..!! Tank girl also overlayed and this gave the hero’s a sniff..!! Ghetto still rounded in first place with Tank Girl and PB rounding together not too far behind.. The next work was a bit of a drag race with all three of us heading right.. Ghetto got to the top first and had maybe even extended their lead.. PB managed to hold in with Tank girl and even put a few meters on her.. When we got to the lay Tank Girl still hadn’t tacked so we cut the corner and passed them. The Tankers had a few issues on their next tack and it was pretty slow which gave PB a clear lead.. Down to the finish it was Ghetto, PB, Tank Girl, Squid and then Allwood Sails.

Great close racing and a hell of a breeze..!! It had built to about 17 or 18kts now and the tide was offering quite a few ramps.. It was a back of the bus ride for all of us.. 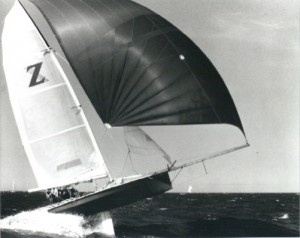 The second race start was again a bit of a confusing affair with nobody really knowing when to go, but somehow we all hit the line at about the same time and it was game on..!! The first work saw PB out in front followed by Tank Girl and Ghetto Sled.. Squiddy were close behind with a bit of pole poking over the transom of Tank Girl.. It was fairly close and personal even for Terry..!!

Around the top mark and I think we got the top wind speed of the day for the rounding.. We all got around cleanly but it wasn’t pretty.. PB had the kite up first and pulled away.. Ghetto were next with Squid and Tank Girl once again locked at the horns.. Benny clearly has issues with his old boat beating him so will go to great lengths to stop them.. Fortunately for him Terry had a broken bob stay and was being very careful….

We got to the gybe and PB nailed it.. We thought we were killing it.. The boat was going fast and our crew work was improving.. Game on Bitches..!! Shame the skipper didn’t really take the tide in to account and ended up too high on the lay letting Ghetto through the gate..!! Tank girl had a little swim so there was a bit of a gap to 3rd, 4th and 5th.. Allwood were having all sorts of drama’s tacking with big rig in that breeze so retired early..

The beat saw a nice little tussle between PB and Ghetto with Ghetto holding them firm but splash tacking just before the top mark.. Unrucky..!! PB flew past and up went the kite.. Woohoo..!! The rides were amazing.. Have I mentioned that..?? Well they were..!! PB got to the bottom mark clear ahead but not all that far ahead of Ghetto.. As we soldiered out to the right hand side of the course Ghetto were rocking their super high mode and had definitely made big gains on PB.. We knew we had to nail our last tack and we almost did.. We got through safely but we were looking marginal to make the top mark.. Oh no..!! Ghetto tacked a bit beyond our line and we knew they would lay… Did we have enough time for two tacks or had my lay lines cost us the lead twice..?? We got close to the top mark and went through for the tack.. It wasn’t a bad one so I was a little optimistic.. Unfortunately Ghetto had made their move and were going to be ahead.. We tacked and they passed us.. It would be a sprint for the line..!! Both crews were tired but did the quickest sets of the day.. The two skinny hulls skipped and bumped their way down hill.. PB tried to get up on Ghetto but they were clear enough to have their nose breathing freely.. The pressure gybe came with PB trying to gybe inside but it was too little too late and Ghetto got a well-deserved second win for the day..

Awesome conditions and awesome racing, the season has really started and boy has it exceeded expectations..!! The ride back to the beach was awesome too.. Why would you sail anything else..?!?! There is nothing like a 12ft skiff kite ride..

We’re all looking forward to next week’s show down with another good breeze forecast (yes I’ve already looked it up..) and plenty of crazy skiff action..!!