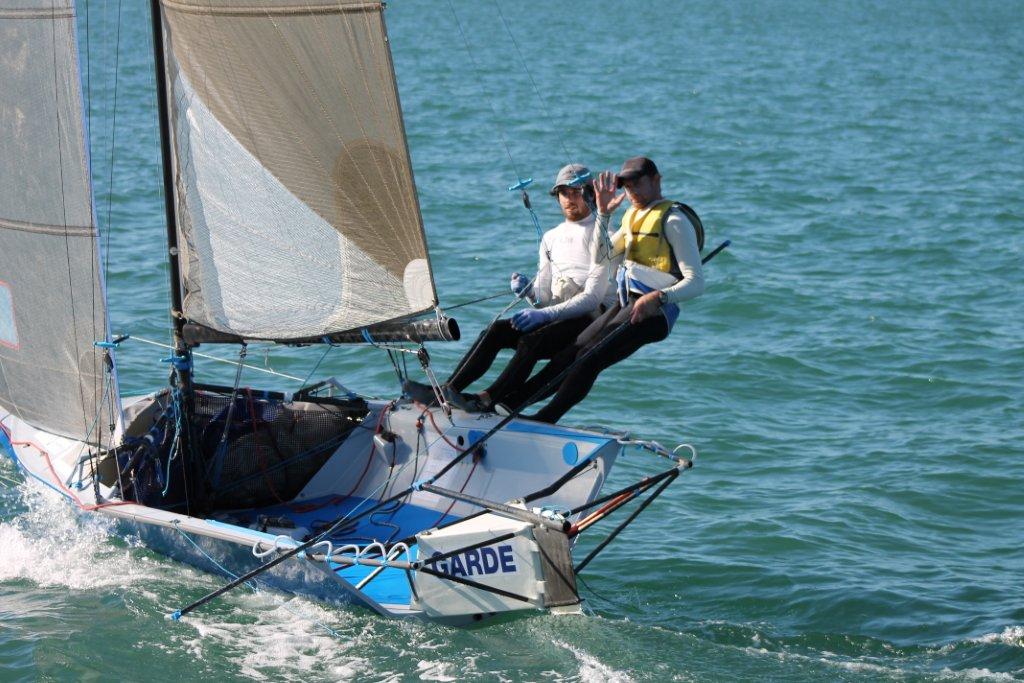 The light conditions continued for the last three races at Waterloo Bay, Brisbane. A warm seabreeze came in Sunday which made for a relaxing afternoon sail. Garde continued their winning streak, winning the regatta with one race to spare. Their excellent race planning and boatspeed made them hard to fault. Pressure was on leading Queensland boat, The Wingman (Skinny Fleming, John Cole), to hold on to their 2nd place tie with Lincolne Crowne (Jonno Temple and Richard Jones) at half time. A large portion of the fleet is well matched, needing error free racing over the remaining races to come out ahead.

[singlepic id=1302 w=250 h= float=right] The light breeze and pin end bias made for a crowded line and tricky start to the fourth race of the series. This saw a quick pre-start duck back to the line by Michael Spies on Hempel Yacht paints, while Dave Lusty on “The Bird” was over and returned around the end. Our start was mediocre, needing a quick tack for clear air. When you need all the horsepower you can muster from the big rig, there’s nothing worse than dirty air in a light breeze and it was tough work to make up the lost distance. The top boats still came out ahead however, with Garde taking the win for the fourth time followed by Murray Press on Gemmell Sails. The battles down the fleet continued with Queenslanders Ghetto Sled having excellent boatspeed and keeping pressure on the third boat, Lincolne Crowne. Vantage real estate crossed the line in fifth place, a tight finish just three seconds ahead of myself and Craig Dancer on Tank Girl. Skinnyman let his early regatta form slip to come in just behind us.

The conditions held for the second race of the afternoon, coming in slightly allowing the sailors to finally stretch the cramps from our legs. The top mark saw some action with Tank Girl coming in hot on the port layline, grinding over Gemmell sails and almost take out series leader Garde. Garde, having once again set up an excellent first beat was putting the pressure on from starboard and saw us crash tack late at the bouy to practise a little close quarters mayhem. Garde set their kite first, followed by ourselves and Murray Press in Gemmell sails who opted for a more relaxed rounding.

[singlepic id=1308 w=250 h= float=left] This first group of boats completed the remainder of the course conservatively while the group following battled it out for the remaining points. Garde kept their boat well placed on the course and took the win for the race and the series. Ghetto Sled did well to work their way past Skoll (Wolfy) into fourth place despite being pestered by The Wingman (Skinnyman) at the bottom mark, while Tank Girl had her eye on second-placed Gemmell sails before rounding the final mark to finish third.

Monday morning came and the early start of race 6 was postponed in favour of the breeze building to acceptable levels for ‘skiffing’. Time to launch passed with no boats rigged and many crew having their morning coffee. The clever few were waiting for serial early – launch perpetrator, Murray Press, to break the calm and drift furiously to the race area. Fortunately this never happened and the Race Committee reluctantly hoisted the AP saving us from hours of cramped legs.

The race finally got underway and saw Garde sail another great race for a third place, this time with Brad Philips at the helm. Again it was a dash for the top mark, Gemmel sails, Lincolne Crowne, Tank Girl and Garde arriving in a rush. First to fall was Tank Girl after a rookie rigging error left their kite hoisted around the forestay…. We remedied this only to find we now had a wineglass involving the chute retrieval line. By the time this was sorted we were half a leg behind the fleet, so I’ve really no idea what happened from here.. it seems the positions remained unchanged though, with Gemmell sails taking the win. We did claw back a few places however the damage was already done to our scorecard, our drop firmly cemented during the fickle conditions of race 3.

An excellent performance by Qld Junior, Josh Franklin and newcomer Rilke De Vos saw them come fifth in “Pennyliss”, the Qld Association boat. They narrowly missed fourth place, behind Garde, in a close finish with Ghetto Sled (Richard Billett and Ben Cross). Coming into the finish Ghetto Sled were behind but had the Starboard tack advantage. In a cunning move Ghetto forced the gybe then rolled Pennyliss to cross just boatlengths ahead at the pin end of the line… a scenario played before in sprint races during the summer. Nick Bunyard and Robbie Polec crossed sixth in “Hey Charger”. Maybe they went easy the night before, in preparation for the long drive home… will this be enough motivation to start another morning race? Who knows.