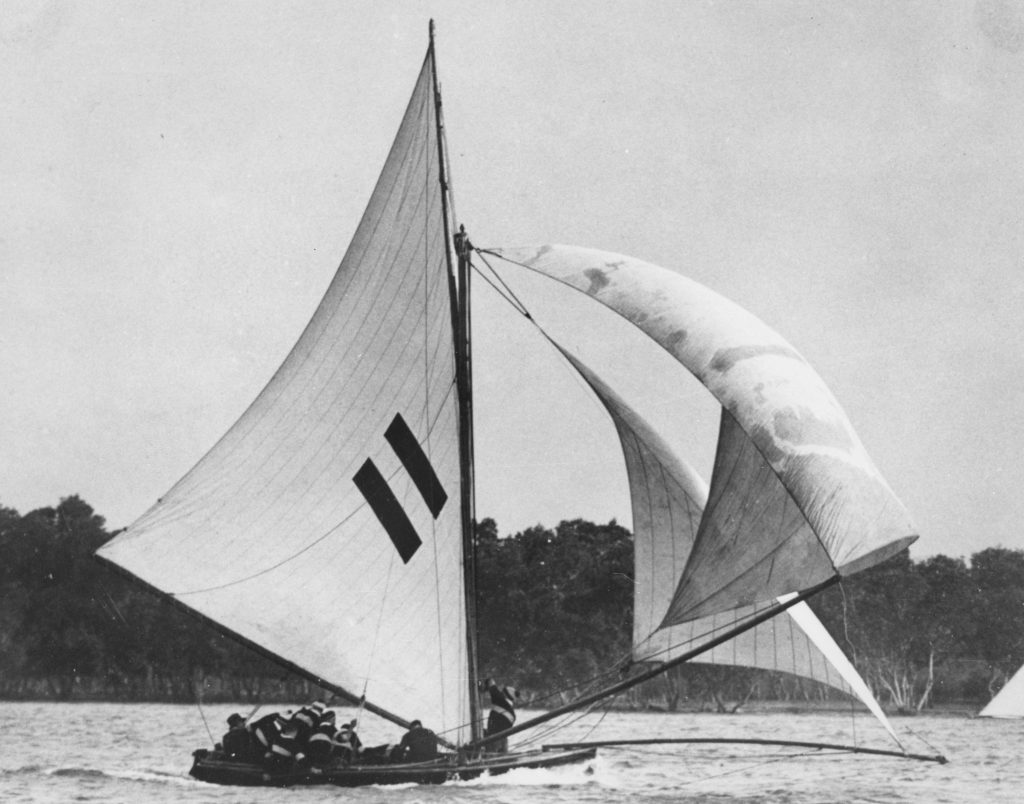 The Brisbane Eighteen Footers’ Sailing Club was the new name for the start of the 1920-21 season, as reported by the Telegraph and The Courier Mail on 30 September 1920, formed to take over the 18 footers. The papers give information about the entries and handicaps for the first race on Saturday 2nd October, held on the Hamilton-Lytton reach. From the Telegraph:

The race was held in a strong south easterly as reported in the 4 October editions of the papers e.g. The Brisbane Courier. Vanity capsized prior to the start, Ou la lah took command soon after the start, and maintained it to the bottom mark however Langham had the inside position, on the way back LFH caught some good squalls to catch the leaders, passing Ou la lah at Parker Point, the finish being: LFH (L Watts); Ou la lah (R Howmann); Vision (C Clark) ; Rona II (E Springfield); Langham (V Negus).

Ou la lah was sailed by the Digger Syndicate; one of them being Albert Haslet. His daughters Jill and Elanne, tell the story:

“A group of them in the same battalion determined that when they got back from they would live life to the full – people like Springfields – and they pooled their war pay into an 18’ Thelma I in 1919, which they re-named Ou La Lah as they were on the front line in France. They had their Artillery colours as a design on the sail. The crew comprised many prominent rugby league footballers from the Valley Football Club and swimmers from the Valley Swimming Club. The boat was later renamed Marjorie.” 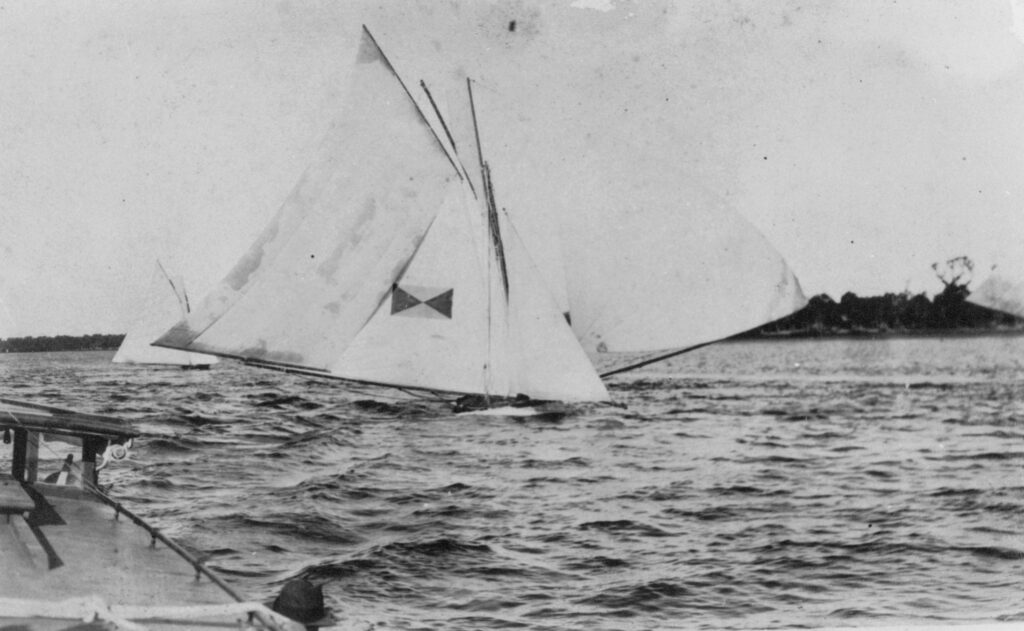 Albert Haslet resumed his work a jeweller after the war and he made the Buck Spring trophy and other similar trophies, being a replica boat with twisted silver for rope, little pulleys and people. 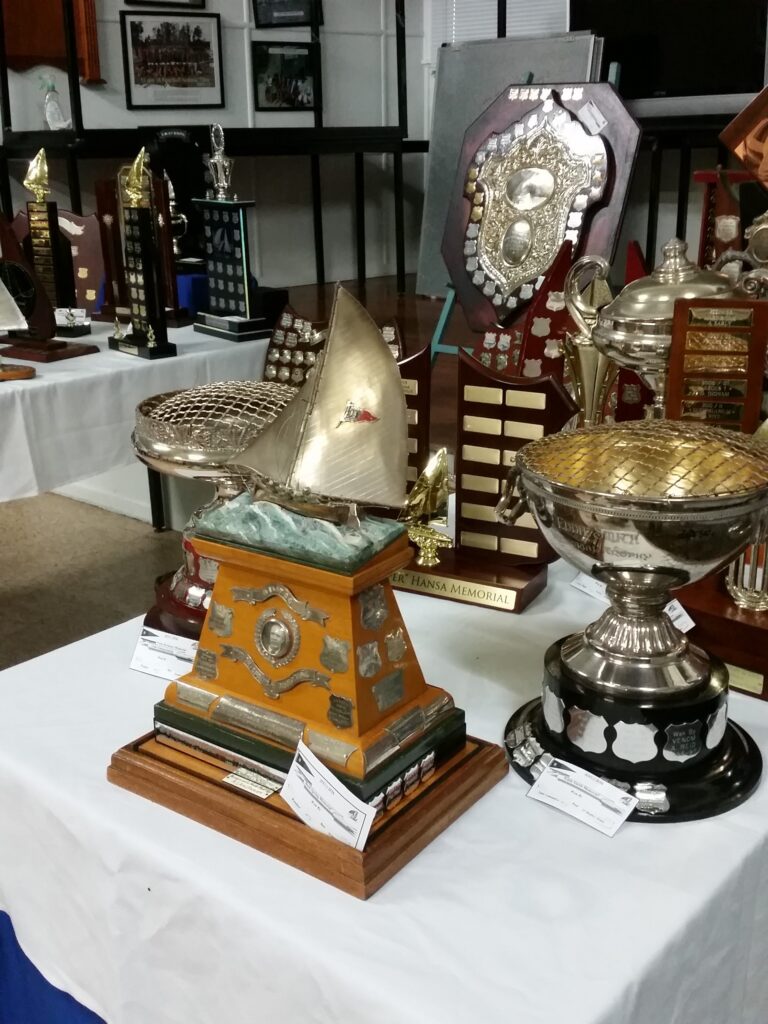 The Buck Spring Memorial Trophy (front) is still awarded by the Club.

Rona was an 18, but her owner Ned Homann had her extended to be a 22ftr, then later reduced to be an 18 again, with Ernie Springfield as skipper in both lengths.

The boats being sailed from the 1900s were open carvel dinghies with a hollow heel, with minimums of beam of 7’, depth of 2’; built of cedar planks, with strong ribs and riveted. There was a heavy steel centreboard approximately 5’6” by 3’ with handles, and to reduce water entering the boat there were canvas lee cloths inside along the gunwales and some also had canvas attached across the front. The solid timber mast (about 25ft) and spars (gaff, boom, plus spars for ringtail, topsail and multiple pieces for spinnaker) were usually of oregon pine or spruce, stepped in a hardwood tabernacle. Both the mast and bumpkin had brass fittings with lugs cast on to it to attach supporting stays.

These heavy boats were housed at sheds or boatbuilders yards along the river, where they could be launched on slipways. Club races included courses past the Boat Passage to round a buoy at Bulwer.

The sails were of cotton and later japara silk (cotton after a waxing process to waterproof); mainsail and jib plus balloon jib, topsail, ringtail, watersail and spinnakers (topsail and mast header) could be flown – if all set could total at least 2500 square feet. A crew of 10 or more was needed to heave on the sheets and to balance the boat, double banked and leaning out hanging on to short ropes with their feet under battens in the boat, plus those bailing from the bilges.

In 1925 the Club removed the beam and draft restrictions which renewed interest in the 18’s; however the interstate clubs would not agree, and when Brisbane hosted the 1926 interstates (local rules applied) no interstate boats attended (Vione from Townsville participated) and then no Queensland boats went to Sydney in 1927. At the 1926 regatta in Brisbane, at least one boat was built to a narrower beam – Jim Crouch’s JC with a beam of 6’6”. And a Mr F Christensen jun. of Yeronga was building one of 4’6” beam; having previously built 16s and 18s including Vione which became Qld champion with skipper Lance Watts and was later sold to Mr F Satini of Townsville.

And there were changes in the Sydney clubs – in the mid 1920s there were a large number of 18s sailing, alternating between two clubs and as this was not practical, they joined and continued Mark Foy’s ideas of triangular courses, handicap start and design on mainsail with additional events to interest spectators and thus support the club and sailing. Disagreements about the rules continued as each state put effort in to building faster boats.

The interstate rivalry occurred most years of the decade, in Sydney, Brisbane and Perth. The 1919-20 in Brisbane was not official as only Queensland boats participated due to a strike in the shipping industry. In 1920-21 and 1922-3, the Vision crew with Colin Clark continued their good form, winning Australian titles; followed by Jim Crouch in Queenslander III in 1926-7 and Harold Crouch in Waratah in 1929-30. Colin Clark had previously won the Australian title (1895-6) in Britannia.

Britannia was bought by Cairns interests in November 1900 and there were 18s in other coastal towns – Mackay, Bowen, Townsville; the Sylvania (ex Britannia II) was sailing with the Cairns Aquatic Club and competed in Australian Championships such as those held in Brisbane in 1922-3 and Sydney in 1923-4. 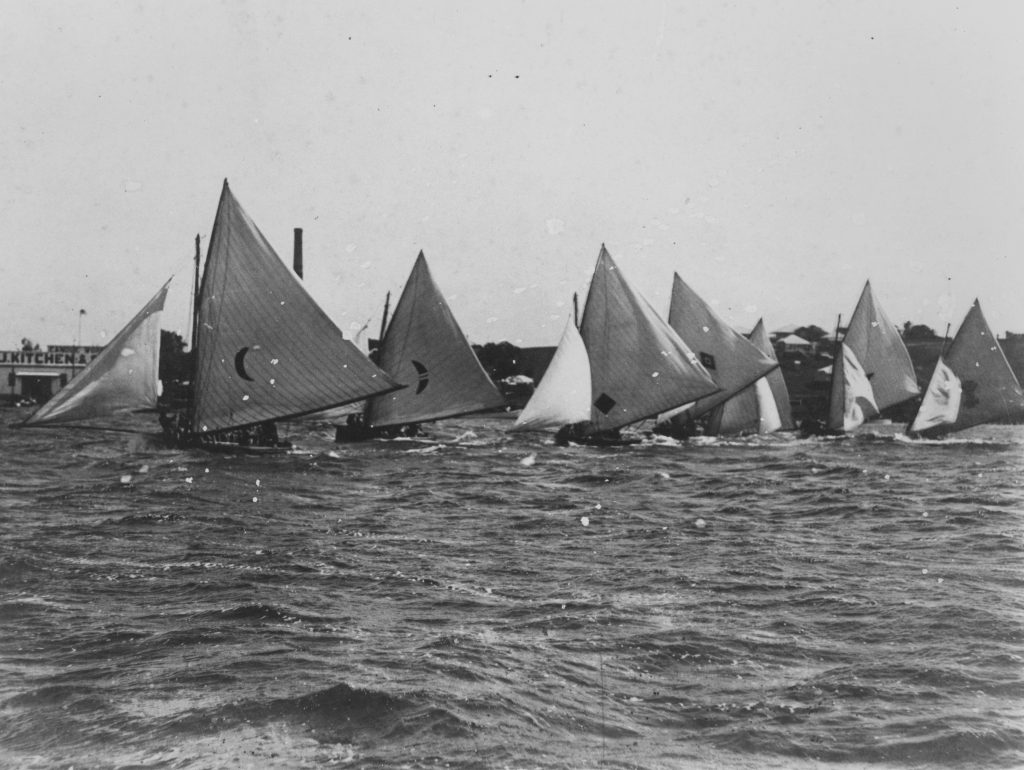 The 1929-30 Australian Championships were held on the Brisbane River in a strong ebb, stiff SE with occasional squalls. Only 3 out of the 11 competitors finished due to breakages and capsizes. The winner Waratah went from last to second. The smaller beam JC who had won the 1928 Queensland title (widened at the gunwale for Australian title) was a long way in front and the story recorded by George McCartney is that she was near the finish line but a hat was raised in salute to the spectators and next thing she capsized and it was an ebb tide. There was comment in the press suggesting the importance of having 3 heats instead of a single race.

Sources: NLA’s Trove; past members and their families; Elliott (2012); http://www.yachte.com.au