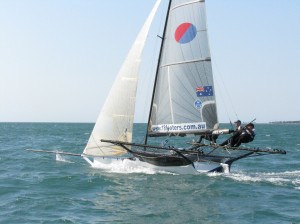 Age before beauty – in this particular race, that’s the exact finishing order.

The forecast was vague. Some reports said 5-10 knots NE, some said 15-20 NE-NW. Darryl (aka. Yoda) could tell by the shape and fluffiness of the clouds that the breeze was going to pick up. (“Come in it will. Mmmm. Adam and Laurie, sorry they will be.”)

Darryl on Dashco Builders went with the small rig in anticipation for the blow and Queenslander sagely followed suit with their total crew weight just a fraction more than a rudder pin.

Sailtech Sails and Panasonic QLD weren’t about to chicken out. It was BIG RIG or go home, although eyes widened and conversations quickened as the nor’easter kicked in for the afternoon.

“I think we’ll have a bit on,” mumbled Laurie from Panasonic QLD, repeatedly. 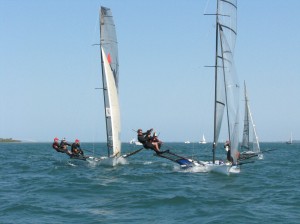 The race stared with some confusion. Three of the boats crossed close together while Sailtech Sails thought they still had a minute to go. To be fair, so did Queenslander – they were just closer to the line.

Dashco were first to the mark with Panasonic QLD closing in. Adam on Sailtech had caught up and were only a boat length behind in third with Queenslander forth, but squeezing more pace out their boat with every tack.

The first stack of the day went to Laurie’s team when the sheethand’s trapeze hook broke. Chris and the boys on Queenslander were next to go down close to the top mark with a botched tack.

Sailtech took the lead to the bottom mark as they took off like scalded cats, “sending it to the sky with an unbelievable ride with the transom clipping the waves and showing plenty of centre board”. Top speed clocked – 19.6 knots. 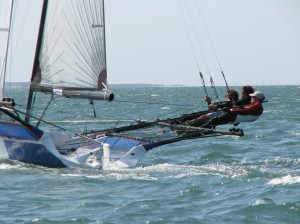 Disaster struck Panasonic QLD again during the second run downhill when they had to ditch to re-attach the kite halyard block to the top of the rig. This spelt game-over for Laurie.

With Queenslander struggling with a faulty spinnaker halyard and a ridiculously low tide, it had become a two horse race.

Sailtech and Dashco were only a few hundred meters apart on the 3rd and final run, with both boats pushing it to the absolute limit. In the final gybe, only 300m from the line, Sailtecc came unstuck, caught a wing in the water and went down hard. Dashco Builders saw their opportunity and pounced, taking the well-earned line honours. 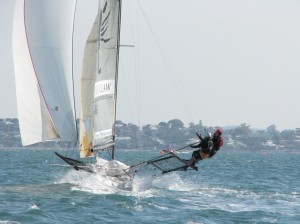 The sly old foxes had the speed, consistency and patience and managed to out-perform the big rigs on the day, while the less competent, yet far better looking guys on Queenslander still enjoyed the day and have the bruises to prove it.

Sailing doesn’t get better than this! Blue skys, warm water and the thrills and spills of 18 footer sailing.

So far, that’s one for Laurie and one for Darryl. See all race results for the year here.