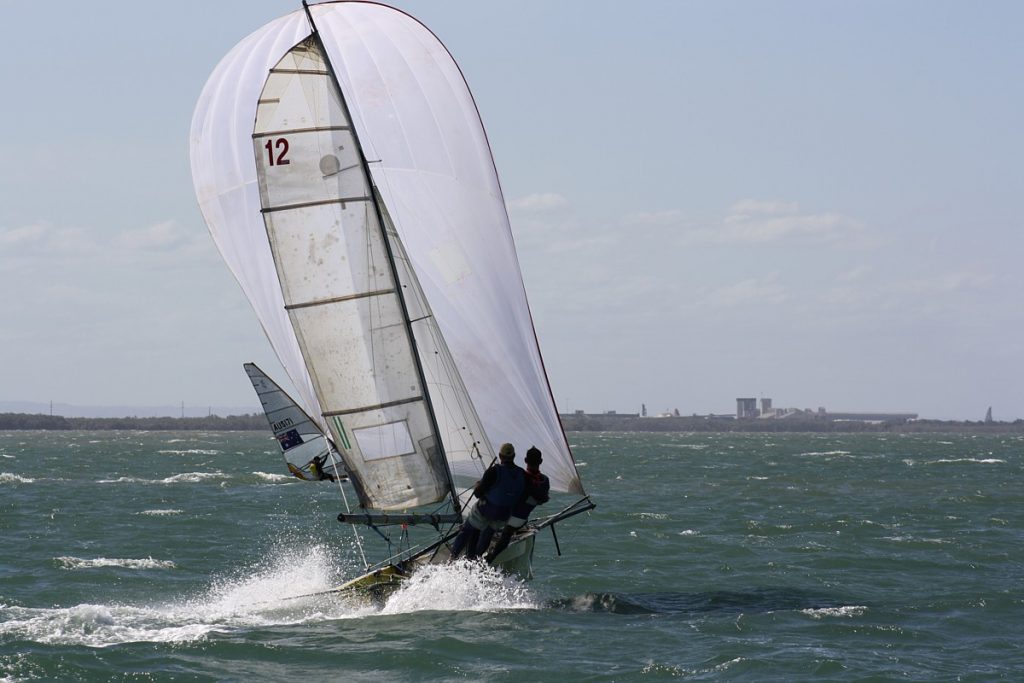 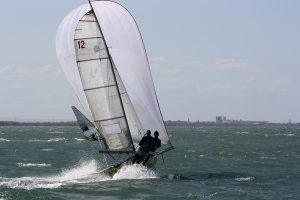 The wind was strong as predicted and made for one of our best days of the season!

As we launched the 'real' southerly came in, playing havoc with the starting flags.  By this time PB Towing headed home for cupcakes with a broken tiller extension after 5 swims, and the red boat also headed in to join them.

The start re-commenced with heavy weather flags, leaving Squid half a leg behind in the drink.  As the only boat remaining with second rig we were duty bound to show how 12's should really be raced.  Practice being well overcooked is exactly what we need for Sydney!  The southern side of the course was flatter and all the boats headed right, our fat hull finally gathering pace out of the waves.

We paid no notice to Ghetto doing it 'Laser style', two sail running to the bottom mark.  We know the tactic of 'slow and steady' works better when your boat has the forgiving proportions of ours.  A skinny boat with no spinnaker looks, well.. slow and unsteady.

Before I could ask Craig 'what do you think' he'd already hoisted the kite leaving me cursing.  Squid flew the length of the bay, and with some kind of miracle we dropped it perfectly, narrowly avoiding the death angle to the mark, rounding safely not far from them.  The next leg we had old Yella to reel in. The pending battle finished prematurely due to the world's longest teabag session; Terry thoughtfully steering somewhere else.

We rounded the top mark- gaining on Ghetto who capsized 'laser style' – and tried a windward hoist which prawned. Realising Terry was bearing down on us at 20kts we got ourselves together.

The kite went up for the final run to the finish, with old yella barely a boatlength away! With a lot of yelling we two wired – smashing into and over some steep chop.  A gust hit, the boat took off and we smoked them.

As we got to the line we hit a wave hard – I flew past the rig and Craig landed next.  I don't know what happened but that was the fastest, deepest mine I've had all season.  So we floated across the line in last place, but what a way to end the season!!

Looking forward to the Nationals in Sydney, Bring it!!!  Three Qld boats are on their way.

Sent it, didn't bend it! 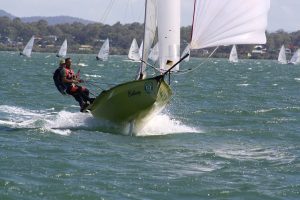