In 1993, a group of our veteran 18 Foot Skiff sailors decided to revive the class at the old Bulimba clubhouse.  Two years earlier 18ft skiff sailing folded due to the increasing costs of the high performance winged boats, and the ever shrinking sponsorship funds to keep them on the water.  A decision was made – “step back in time!” – and the Classic 18 was “reborn” from the typical Farr boat of the 1970’s. 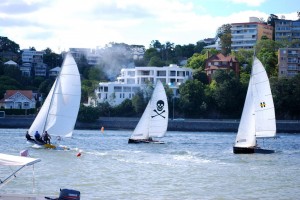 The reasons for going back to the 1970’s design were:

The Classics are truly what the 18’s of today were like before they grew wings. While the speed of contemporary skiffs is greater in the lower wind ranges, the top end speed of both the Classic and winged skiffs, especially downwind, is very comparable.  This was highlighted during a “Classics vs Plastics” regatta held on the River, where a number of Australian 18 Footers League boats challenged the Classics on our home turf – the Sydney boys nearly tripped over their jaws when Mick Reid’s home built Classic was keeping up with some of the best winged skiffs of the time in the gusts!  (of course, in the lighter range of breeze the modern rigs were far too powerful for the old second hand gear the Classics use)

So what are the requirements to sail a Classic 18? A love for sailing, particularly sailing fast(ish), is a good pre-requisite. Our fleet is always looking to introduce new sailors to the fold.

The Classics will once again be sailing on the River in season 2011-12, alongside the Historical 10s, on selected Sundays.  See the race calendar for details.